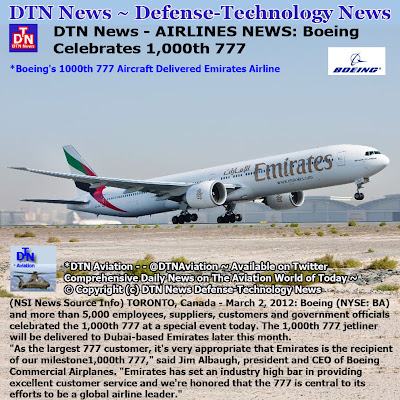 "As the largest 777 customer, it's very appropriate that Emirates is the recipient of our milestone1,000th 777," said Jim Albaugh, president and CEO of Boeing Commercial Airplanes. "Emirates has set an industry high bar in providing excellent customer service and we're honored that the 777 is central to its efforts to be a global airline leader."
Last year was the best year on record for 777 sales with 200 orders from 22 customers – topping the previous record of 154 set in 2005. Production is at an all-time high for the program and a 20 percent rate increase begins this fall, increasing from seven to 8.3 airplanes per month. The program will begin building 100 airplanes per year beginning in 2013.
Emirates is the 777 program's largest customer with 102 777s now in its fleet and 84 passenger airplanes and nine freighters on order. Emirates is the only airline that operates all six members of the 777 family.
"Emirates is honored to be the recipient of Boeing's 1000th 777 aircraft whose advanced long range capacity has been instrumental in our success of becoming a truly global airline," said His Highness Sheikh Ahmed bin Saeed Al-Maktoum, chairman and chief executive, Emirates Airline and Group. "As the world's largest operator of the 777, we have 93 more 777s on order, which is testament to our belief in the product and the role this aircraft will play in our goal to further establish Dubai as a central gateway to worldwide air travel."
"The ultimate measure of success in this business is when you reach the 1,000 mark," said Larry Loftis, who until recently was vice president and general manager of the 777 program. "Reaching this milestone puts the 777 in an exclusive club and I would like to thank all our employees, suppliers and customers who made it possible."
"Reaching this milestone requires two things," Loftis added. "A product that provides exceptional value and a world-class production system to reliably bring that product to the marketplace – and we have both on the 777 program. As a result, the 777 program reached this milestone faster than any other twin-aisle airplane because of the 777's proven performance, exceptional value, continuous innovation and progressive environmental performance."
The 1,000th 777 is a 777-300ER (extended range) model that seats 360 passengers in a three-class configuration.
To date, Boeing has recorded orders for 1,361 777s to 64 customers around the globe.
Contact:
Debbie Heathers
+1 206-579-5159
777 Communications
debbie.heathers@boeing.com
Photo and caption are available here: http://boeing.mediaroom.com 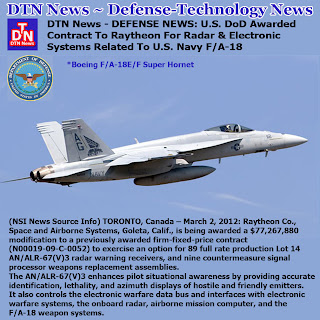 Work is expected to be completed in December 2014.  Contract funds will not expire at the end of the current fiscal year. 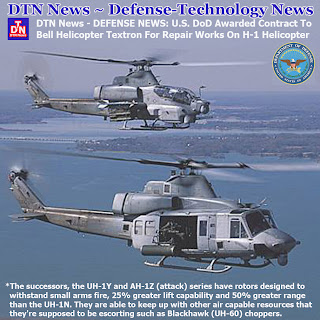 The Navy Working Capital Funds will not expire at the end of the current fiscal year.

One company was solicited for this requirement and one offer was received in response to the solicitation.