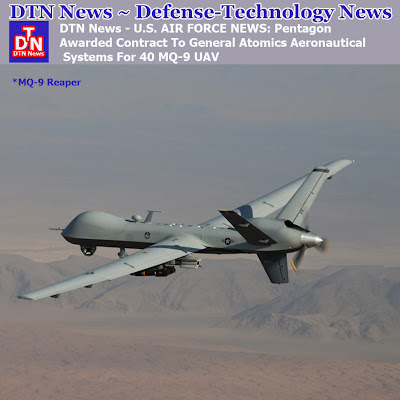 The location of the performance is Poway, Calif. Work is expected to be completed September 2013. This was a sole-source acquisition; one proposal was received.
ASC/WIIK, Wright-Patterson Air Force Base, Ohio, is the contracting activity (FA8620-10-G-3038 0017).
The General Atomics MQ-9 Reaper (originally the Predator B) is an unmanned aerial vehicle (UAV), capable of remote controlled or autonomous flight operations, developed by General Atomics Aeronautical Systems (GA-ASI) for use by the United States Air Force, the United States Navy, the CIA, U.S. Customs and Border Protection, the Royal Air Force, and the Italian Air Force. The MQ-9 and other UAVs are referred to as Remotely Piloted Vehicles/Aircraft (RPV/RPA) by the U.S. Air Force to indicate their human ground controllers. The MQ-9 is the first hunter-killer UAV designed for long-endurance, high-altitude surveillance.
The MQ-9 is a larger and more capable aircraft than the earlier MQ-1 Predator (other than loiter time), and it can be controlled by the same ground systems used to control MQ-1s. The Reaper has a 950-shaft-horsepower (712 kW) turboprop engine, far more powerful than the Predator's 115 hp (86 kW) piston engine. The increase in power allows the Reaper to carry 15 times more ordnance and cruise at three times the speed of the MQ-1. Although the MQ-9 can fly pre-programmed routes autonomously, the aircraft is always monitored or controlled by aircrew in the Ground Control Station (GCS) and weapons employment is always commanded by the flight crew.
*Link for This article compiled by Roger Smith from reliable sources - U.S. DoD issued No. 1004-11 December 8, 2011 & General Atomics Aeronautical Systems
*Speaking Image - Creation of DTN News ~ Defense Technology News
*This article is being posted from Toronto, Canada By DTN News ~ Defense-Technology News
Contact:
dtnnews@ymail.com

Source: DTN News - - This article compiled by Roger Smith from reliable sources British MoD & KMW Krauss-Maffei Wegmann
(NSI News Source Info) TORONTO, Canada - December 11, 2011: Armoured vehicles such as tanks, reconnaissance and personnel-carrying vehicles are essential for a wide range of military tasks.
Since the 1998 Strategic Defence Review, the Ministry of Defence (the Department) has attempted to acquire the vehicles it needs through a number of procurement projects. 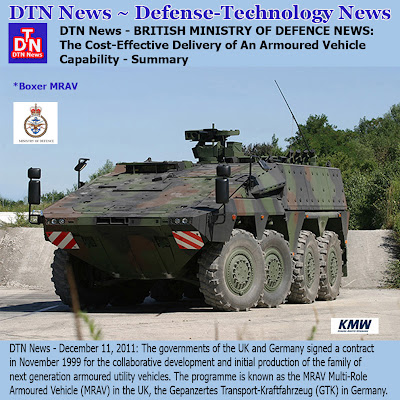 However, none of the principal armoured vehicles it requires have yet been delivered, despite the Department spending £1.1 billion since 1998, including £321 million wasted on cancelled or suspended projects. As a result there will be gaps in capability until at least 2025, making it more difficult to undertake essential tasks such as battlefield reconnaissance.
Partly as a result of this £1.1 billion failure to yet deliver any armoured vehicles, and to meet the specific military demands of operating in Iraq and Afghanistan, the Department was provided with a further £2.8 billion from the Treasury Reserve to buy Urgent Operational Requirements (UOR) vehicles. The Department has used the faster UOR process to deliver mine-resistant vehicles for operations.
However, these vehicles are expensive and are designed for specific circumstances, so will not meet the wider requirements identified in the recent Strategic Defence and Security Review (SDSR). Delays to the delivery of the principal armoured vehicles have meant that other equipment, such as helicopters and other vehicles, have been used more frequently to undertake tasks such as battlefield reconnaissance and transporting personnel. Using helicopters and other vehicles in this way can be less effective and may divert expensive military assets from other essential tasks.
Over the past six years, the Department has removed £10.8 billion from armoured vehiclebudgets up to 2021. Armoured vehicles projects have suffered more severe budget cuts than other equipment projects, largely because they involve lower levels of contractual commitment and are therefore easier to cut. This has left £5.5 billion available for the next ten years, which is insufficient to deliver all of the armoured vehicle programmes which are planned.
The Department needs to be clearer about its priorities, and stop raiding the armoured vehicles chest every time it needs to make savings across the defence budget. The Department acknowledges that it has been both indecisive and over-ambitious in setting vehicle requirements, and that the ways it has sought to procure armoured vehicles have been too complicated.
The Department will need to set more realistic requirements in future if it is to deliver projects on time and to budget. We are also concerned that the Department was unable to identify anyone who has been held to account for the clear delivery failures. It is critical the Department has named senior staff with the necessary powers and sufficient time in post to take proper responsibility for and be held accountable for such projects.
The Department has yet to balance its defence budget fully and devise a plan to close capability gaps, despite having conducted the SDSR and two subsequent planning exercises. The Department needs to determine its armoured vehicle equipment priorities and deliver these as rapidly and cost-effectively as possible, including making an assessment of which of its existing vehicles should be retained after combat operations in Afghanistan cease.
On the basis of a Report by the Comptroller and Auditor General, we took evidence from the Ministry of Defence on its progress in delivering armoured vehicles.
Click here for the full report (40 pages in PDF format) on the Parliamentary website.
*Link for This article compiled by Roger Smith from reliable sources
British MoD & KMW Krauss-Maffei Wegmann
*Speaking Image - Creation of DTN News ~ Defense Technology News
*This article is being posted from Toronto, Canada By DTN News ~ Defense-Technology News
Contact:
dtnnews@ymail.com

An airborne signals intelligence system configured specifically for the newest C-130J aircraft has been delivered to the U.S. Air Force by Lockheed Martin [NYSE: LMT]. The system, which is part of the Senior Scout program that enables C-130 aircraft to be used for tactical signals intelligence and reconnaissance, will undergo acceptance testing in December. 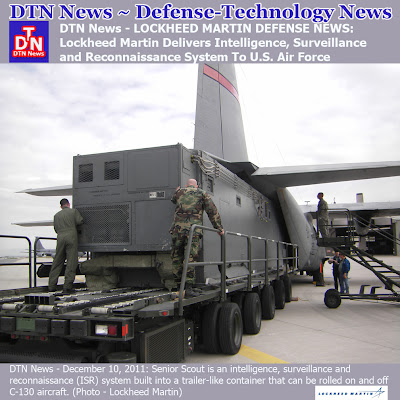 Senior Scout is an intelligence, surveillance and reconnaissance (ISR) system built into a trailer-like container that can be rolled on and off C-130 aircraft. This ISR suite of equipment rapidly configures standard C-130 aircraft for tactical signals intelligence, providing capabilities that exploit, geo-locate and report communications intelligence and signals of interest to air and ground component commanders.

“We are honored to continue providing the Air Force with a modern, capable signals intelligence system,” said Jim Quinn, vice president of C4ISR Systems for Lockheed Martin IS&GS-Defense. “The latest shelter configuration advances the Senior Scout capability for the next generation of C-130J aircraft.”

In addition to undergoing system upgrades, the latest Senior Scout shelter was enhanced to be structurally compatible with the newest C-130J aircraft. System interfaces were updated, and the shelter was equipped with the latest technology enhancements and improvements for maintenance access. The shelter also defines the design that will be used to upgrade the three legacy shelters over the next 24 months to ensure the entire Senior Scout fleet is C-130J compatible.

For more than 20 years Lockheed Martin has provided system development and operational support to the U.S. Air Force for roll-on palletized ISR monitoring shelters. The first Senior Scout system was fielded and was used in Operation Desert Storm in 1991.

Palletized shelters that can be rolled on and off cargo aircraft are an element of Lockheed Martin’s Dragon family of ISR configurations. Dragon Shield™ offers a flexible roll-on/roll-off mission suite for customers who need a platform that can perform multiple missions (airlift and ISR). All configurations within the DRAGON series incorporate a modular "plug and play" architecture for the cost-effective, rapid introduction of new capabilities and sustainment.

Headquartered in Bethesda, MD., Lockheed Martin is a global security company that employs about 126,000 people worldwide and is principally engaged in the research, design, development, manufacture, integration, and sustainment of advanced technology systems, products, and services. The Corporation's 2010 sales from continuing operations were $45.8 billion. 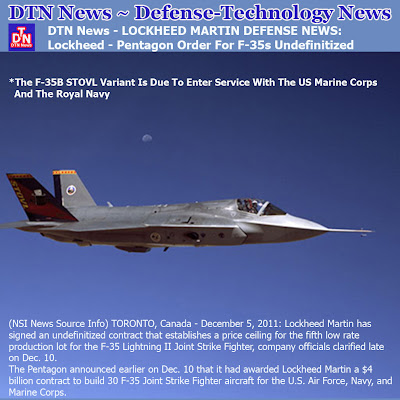 The Pentagon announced earlier on Dec. 10 that it had awarded Lockheed Martin a $4 billion contract to build 30 F-35 Joint Strike Fighter aircraft for the U.S. Air Force, Navy, and Marine Corps.

She said in a statement that the award is welcome news for the company and its F-35 suppliers.

"This … will help ensure we continue to meet production schedules outlined by the program," Quincy wrote. "This is an important first step in paving the way for full LRIP 5 production contract negotiations with our government customer."

The fixed-price-incentive contract calls for 21 F-35A conventional take off and landing (CTOL) for the Air Force, three F-35B short-take off and vertical landing (STOVL) aircraft for the Marines, and six F-35C carrier variants for the Navy.

The contract was awarded through the Naval Air Systems Command.

The next-generation F-35 is a stealthy (radar-evading), supersonic multirole fighter designed to meet the U.S. government's requirements for a new generation of transformational weapons. The single-engine JSF will be manufactured in three versions: a conventional-takeoff-and-landing (CTOL) variant for the U.S. Air Force, an aircraft-carrier version (CV) for the U.S. Navy, and a short-takeoff/vertical landing (STOVL) version for the U.S. Marine Corps.

The cornerstone of the F-35 is affordability, achieved in large part through a very high level of common parts and systems across the three versions of the aircraft.