Source: DTN News - - This article compiled by Roger Smith from reliable sources Economic Times
(NSI News Source Info) BEIJING, China - February 17, 2011: The Chinese army is researching a new type of conventional missile that is set to be weaponized and entered into active service within five years, military sources have revealed. 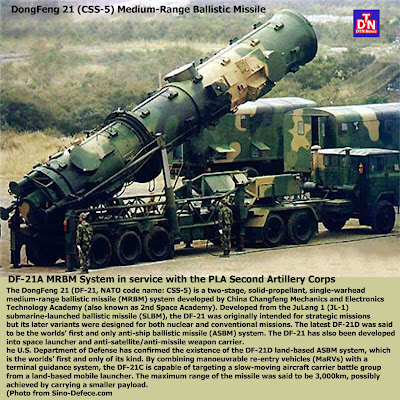 China Aerospace Science and Industry Corporation (CASIC), the nation's largest missile weaponry manufacturer, is set "to complete research, production and delivery of this new generation of missile by 2015," the China NewsService reported Thursday. The new missile would be part of a network forming a solid defense system allowing for total coverage in both defense and attack, and capable of dealing with various threats from land, sea, air, space as well as cybernetic attacks, according to the report. The report, however, did not provide any further details of the new missile. A military source close to the development, speaking on condition of anonymity, confirmed to the Global Times yesterday that "The subject under development is a medium- and long-range conventional missile with a traveling distance of as far as 4,000 kilometers." "The research is going smoothly, and the missile will be produced and ready for service in five years," he said, noting that the project would also entail a three-year evaluation period. "It extends the range of China's missiles and will therefore greatly enhance the national defense capabilities," the source said. The source also unveiled that "the Chinese-made Dong Feng 21D missile, with firing range between 1800 and 2800 kilometers, is already deployed in the army."
Last year, China said it allocated USD 77 billion for its budget to modernise the 2.3 million strong Peoples Liberation Army, (PLA), described as the largest standing Army of the world. The daily described the claims by the Chinese military about development of new missile as part of China’s "military transparency" about its arsenal of weapons. Foreign media have also speculated that the Dong Feng 21D is a "carrier killer" and would prove to be a game-changer in the Asian security environment, where US Navy aircraft carrier battle groups have ruled the waves since the end of World War II, the AP reported. China debuted its first stealth fighter jet, the J-20, in January, in a test flight that coincided with a visit to Beijing by US Defense Secretary Robert Gates. Following the successful test flight, speculations and assessments of Beijing's military advancement echoed around the world.
*This article is being posted from Toronto, Canada By DTN News ~ Defense-Technology News, contact: dtnnews@ymail.com 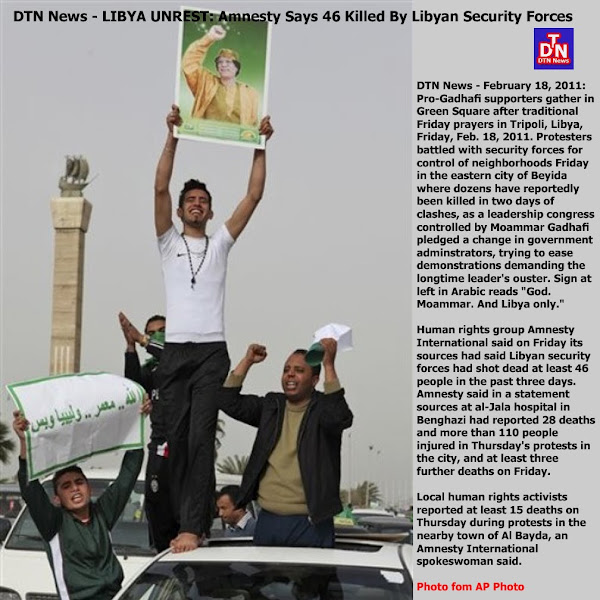 Amnesty said in a statement sources at al-Jala hospital in Benghazi had reported 28 deaths and more than 110 people injured in Thursday's protests in the city, and at least three further deaths on Friday.

Local human rights activists reported at least 15 deaths on Thursday during protests in the nearby town of Al Bayda, an Amnesty International spokeswoman said.

"This alarming rise in the death toll, and the reported nature of the victims' injuries, strongly suggests that security forces are permitted use lethal force against unarmed protesters calling for political change," said Malcolm Smart, Amnesty International's director for the Middle East and North Africa.

"The Libyan authorities must immediately rein in their security forces. Those responsible for unlawful killings and excessive force -- both the direct perpetrators and those who gave the orders -- must be identified and brought to justice," he said in the statement.

Amnesty said the sources at al-Jala hospital in Benghazi had told it the most common injuries were bullet wounds to the head, chest and neck.

Thousands of people protested in Benghazi, Libya's second city, on Friday over a security crackdown in which dozens of people were killed but which failed to halt the worst unrest of Muammar Gaddafi's four decades in power.