Source: DTN News - - This article compiled by Roger Smith from reliable sources IBN
(NSI News Source Info) TORONTO, Canada - April 19, 2012: Prime Minister Manmohan Singh congratulated the scientists of the Defence Research and Development Organisation (DRDO) for the successful test-fire of the Agni-V missile on Thursday.
"I congratulate all the scientific and technical personnel of the DRDO and other organisations who have worked tirelessly in our endeavour to strengthen the defence and security of our country. Today's successful Agni-V test launch represents another milestone in our quest to add to the credibility of our security and preparedness and to continuously explore the frontiers of science. The nation stands together in honouring the scientific community who have done the country proud," the Prime Minister said in a statement.
A tweet from the Prime Minister's Office (PMO) also said that Manmohan Singh called DRDO chief Dr VK Saraswat to personally congratulate him and his team for the successful test launch of Agni-V.

India conducted the maiden test of indigenously developed nuclear capable Agni-V Ballistic Missile from the test range off Odisha coast on Thursday. With over 5,000 km range, Agni V was test-fired at around 0807 hrs from Integrated Test Range (ITR) at Wheeler Island off Odisha coast.
The three stage, solid propellant missile was test-fired from a mobile launcher from the launch complex-4 of the ITR, defence sources said.
Related Images; 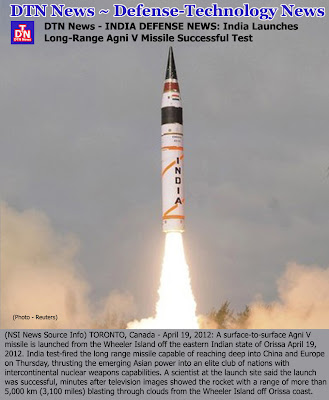 Source: DTN News - - This article compiled by Roger Smith from reliable sources By Catherine Shoichet, CNN(NSI News Source Info) TORONTO, Canada - April 19, 2012: Venezuela's judges make decisions based on instructions from the country's government rather than the rule of law, a former top justice who fled the South American nation said.Eladio Aponte Aponte, who was a Supreme Court justice until the Venezuelan government accused him of connections with an alleged drug trafficker last month, was flown to the United States by the Drug Enforcement Agency this week, a Costa Rican official said. 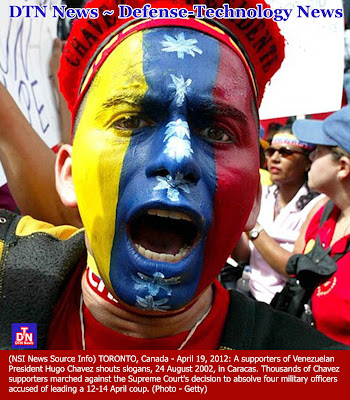 The former judge told Miami-based SOiTV that he fears for his life in his home country. And he described what he said is a corrupt justice system where officials are forced to convict political prisoners."I think it's very corrupt at every single level. There's a lot of manipulation. ... There's no ruling that isn't consulted. Lately, all the criminal courts have to make consultations before handing down a ruling," Aponte Aponte said.In an interview that SOiTV said was taped outside Venezuela, the former judge said "there is no separation of powers" in the South American country.CNN has not independently confirmed the former justice's accusations, and the Venezuelan government did not immediately respond to CNN's requests for comment.Venezuelan officials removed Aponte Aponte from his post last month, accusing him of providing a government credential to a man authorities allege was one of the world's top drug lords.
Aponte Aponte, who has not confirmed or denied that accusation, left Venezuela the day he was supposed to face questioning in the Venezuelan National Assembly.The U.S. Drug Enforcement Administration flew him to the United States from Costa Rica early Monday morning, according to Mauricio Boraschi, vice minister of the Costa Rican presidency and head of the country's intelligence agency.Boraschi said U.S. Embassy officials contacted the Costa Rican government after the former judge -- who had been in Costa Rica for about two weeks -- reached out to officials in Washington.
The U.S. State Department told CNN it could not comment on what it called "this law enforcement matter.""It may have been a way of protecting himself physically and at the same time, he has something to contribute in exchange for them allowing him to become a witness protected by the United States," said Antonio Rodriguez Yturbe, a university professor in Caracas and former Venezuelan ambassador.
Aponte Aponte told SOiTV he left Venezuela disillusioned, but has since changed his perspective."When I finished packing all my stuff in my office, all my books, I told myself I'd never touch another law book. Justice is nothing, justice is a ball of putty. I say putty because it can be molded, for or against. I didn't want to have anything to do with the law anymore. I said I'd rather have a hotdog stand," he said. "But then, after all my reflection, and I had time to think it over, and after I saw that, that my friends have offered to help me, I now think you need to fight for justice. And that blindfolded lady has to be shown the way."During the interview, which was posted on the SOiTV website and aired Wednesday by CNN affiliate Globovision, Aponte Aponte did not detail any conversations with U.S. authorities.Several of his remarks contradicted previous statements by top Venezuelan officials -- including President Hugo Chavez.When asked whether there were political prisoners in Venezuela -- something Chavez has previously denied -- Aponte Aponte said yes."There are people they ordered not to be released. ... In a nutshell, we had to accept the fact that they were not to be released, so the justice system turned its back on them," he said.Asked whether he felt that the Venezuelan government had turned against him, Aponte Aponte said, "I think they did that a long time ago. I just didn't realize it."Venezuelan officials sharply criticized Aponte Aponte last month.A government ethics commission said the judge had committed "serious misconduct" and a "breach of public ethics" when he allegedly provided a credential to suspected drug trafficker Walid Makled.The state-run AVN news agency said the judge had "attacked public ethics and administrative morals.""It is important to recognize that, thanks to the functioning institutions, this became known," said Hugbel Roa, a lawmaker from Chavez's United Socialist Party of Venezuela, according to AVN.Makled is currently on trial in Venezuela, where he is accused of drug trafficking and killing a journalist who was investigating his family. He was extradited to Venezuela from Colombia last year.
The United States designated Makled as one of the world's most significant drug kingpins in May 2009 and had also requested his extradition.Makled, who denies U.S. accusations of drug trafficking, said in an October interview with Venezuela's El Nacional newspaper that he paid millions of dollars to government officials and top military brass so his family's shipping business could operate at some of the nation's largest ports.
"If I am a narcotrafficker, the whole Chavez government is a narcotrafficker," he told the newspaper.
Chavez has strongly denied those accusations and stood up for his government officials.
"I am not going to pay for a crime I never committed," Aponte Aponte told SOiTV, but he said he wants to make up for the harm his rulings have caused.
Saying he felt afraid for his life and betrayed by his colleagues, the former judge said he would go back to Venezuela to face the accusations against him only if officials respect his rights.
"Knowing the system from the inside, and how it works, and how it's handled, I don't think I'd have any rights at all. Not in my case at least," he said.CNN's Fernando del Rincon, Ana Maria Luengo-Romero and Jamie Crawford contributed to this report.