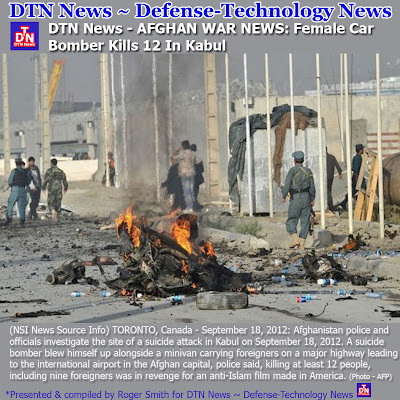 The bombing on a highway leading to Kabul international airport was the second suicide attack in the heavily fortified city in 10 days, reviving questions about stability as NATO accelerates a troop withdrawal and hands over to Afghan forces by the end of 2014.
It came as officers revealed that Western troops are scaling back joint operations with Afghans after 51 NATO soldiers were shot dead this year by their local colleagues, a setback for the war strategy that focuses on training Afghans to take over.
An AFP photographer saw at least six bodies lying among the wreckage of a gutted minivan, and another vehicle destroyed by flames still burning in the middle of the highway, with debris flung all around.
"At around 6:45 am (0215 GMT) a suicide bomber using a sedan blew himself up along the airport road in District 15. As a result, nine workers of a foreign company and three Afghan civilians are dead, and two police are wounded," police said in a statement.
An Afghan and a Western security official said nine foreigners were killed. The South African foreign ministry said eight of its citizens were among the dead.
"The foreigners were from a private company working at the airport," the Afghan official told AFP, speaking on condition of anonymity.
A spokesman for NATO's US-led International Security Assistance Force (ISAF) said it had no reports that its personnel were among the casualties.
Afghanistan's second largest insurgent group, Hezb-i-Islami, claimed responsibility, saying it was carried out by a woman to avenge the "Innocence of Muslims" film, which has sparked a weekof furious anti-US riots across Asia, North Africa and the Middle East.
"The bombing was carried out by a woman named Fatima. The bombing was in retaliation for the insult to our Prophet," spokesman Zubair Sidiqi in a telephone call to AFP from an undisclosed location.
It is extremely rare for the faction to claim a suicide attack in Afghanistan. It is also rare for women, few of whom drive in Afghanistan, to carry out suicide attacks.
A police investigator said he believed the bomber was female, after finding parts of a woman's leg.
On Monday, protests turned violent for the first time in Afghanistan over the low-budget trailer for the film, which is believed to have been produced by extremist Christians, as hundreds hurled stones at a US military base and clashed with police.
In the northern city of Kunduz, several hundred university students threw stones at police and set fire to photographs of US President Barack Obama in a fresh protest on Tuesday.
Under new orders, most joint patrols and advisory work with Afghan troops -- the cornerstone of NATO departure plans -- will have to be approved by a regional commander.
Cooperation with smaller units will have to be "evaluated on a case-by-case basis and approved by RC (regional) commanders", ISAF said in a statement.
NATO, which is helping the Afghan government fight a Taliban-led insurgency now in its 11th year, is gradually withdrawing its 112,600 remaining troops.
But as so-called insider attacks have grown, US commanders have gradually acknowledged the assaults pose a serious threat to the war effort and have struggled to stem the problem.
The commander of US and NATO troops in Afghanistan, General John Allen, "has directed all operational commanders to review force protection and tactical activities in the light of the current circumstances", a US military officer in Washington said in an email.
Defense Secretary Leon Panetta, speaking at a news conference in Beijing, said the attacks were worrisome but that he believed Allen had taken the right approach to counter the problem.
But he insisted the insider assaults would not delay or derail plans to complete a drawdown of troops by the end of 2014 as planned.
The decision came after six ISAF soldiers were shot dead by suspected Afghan police and after the Taliban destroyed six US fighter jets in an unprecedented assault on a major base in the south this weekend.
It was unclear how the new rules for joint patrols might affect the plan to pull out the bulk of NATO combat forces, as some Afghan units are considered ill-prepared to begin operating independently.
Afghanistan police and officials investigate the site of a suicide attack in Kabul on September 18, 2012. A suicide bomber blew himself up alongside a minivan carrying foreigners on a major highway leading to the international airport in the Afghan capital, police said, killing at least 12 people, including nine foreigners.
Map locating Kabul where at least 12 people were killed in a suicide attack on Tuesday
Supporters of Lebanon's Hezbollah group hold signs during a rally in Beirut to denounce a film mocking Islam on September 17, 2012. An eruption of Muslim anger over a trailer of the American-made film that appeared on the Internet has spread across the world, taking hold in Pakistan, Afghanistan, Indonesia, the West Bank, the Philippines and Yemen.
A Pakistani activist from Islami Jamiat-e-Talaba, a student wing of the hard line Sunni party Jamaat-e-Islami (JI), throws a tear gas shell towards the police near the US consulate during a protest against an anti-Islam movie in Karachi.
Lebanon's Hezbollah chief Hassan Nasrallah addresses thousands of supporters who took to the streets of southern Beirut to denounce a film mocking Islam on September 17, 2012. Nasrallah, who made a rare public appearance, has called for a week of protests across the country over the low-budget, US-made film, describing it as the "worst attack ever on Islam."