Source: DTN News - - This article compiled by Roger Smith from reliable sources Stratford
(NSI News Source Info) TORONTO, Canada - January 30, 2011: Egypt’s internal security forces are reportedly redeploying across the country Jan. 30 after abandoning the streets the previous day in a demonstration, showing what chaos would ensue should they be undermined by the military. As the protests show early signs of dwindling, Egyptian President Hosni Mubarak and Interior Minister Habib al-Adly, who have negotiated a stay in power so far, are likely betting that the protesters, who thus far have been unable to coalesce into a unified group, will clear the streets under pressure. However, serious potential for clashes remain, especially considering hostilities between the army and the police and between the police and protesters. The coming hours will thus tell whether Mubarak’s bet on the opposition was a wise one.
Analysis

Egyptian Interior Minister Habib al-Adly reportedly ordered Egyptian police patrols to redeploy across Egypt during a Jan. 30 meeting with the commanders of the Central Security Forces (CSF) in Nasr city east of Cairo. 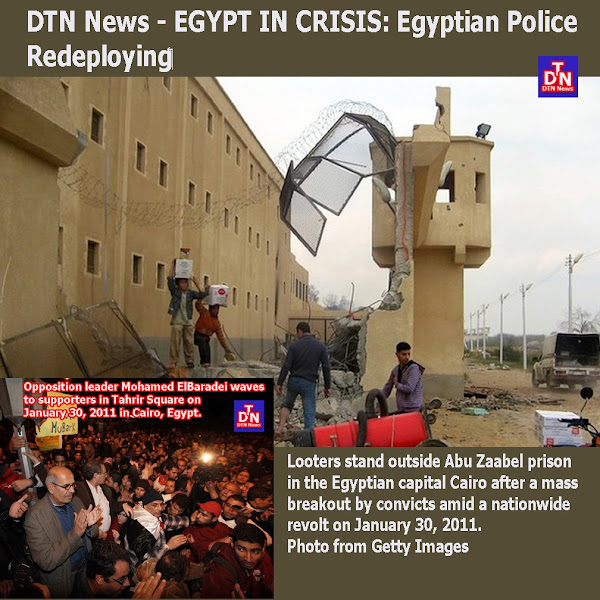 The decision to redeploy the internal security forces follows a major confrontation that has played out behind the scenes between the Interior Ministry and the military. The animosity between Egypt’s police and soldiers was amplified Jan. 28 when demonstrators overwhelmed the CSF and plainclothes police and the army stepped in to attempt to restore order.

Fearing that he and his forces were being sidelined, al-Adly was rumored to have ordered the police forces to stay home and leave it to the army to deal with the crisis. Meanwhile, multiple STRATFOR sources reported that many of the plainclothes policemen were involved in a number of the jailbreaks, robberies of major banks, and the spread of attacks and break-ins into high-class neighborhoods that occurred Jan. 29. In addition to allowing the police to blow off steam, the implicit message that the Interior Ministry was sending to the army through these actions was that the cost of undermining the internal security forces was a complete breakdown of law and order in the country that would in turn break the regime.

That message was apparently heard, and, according to STRATFOR sources, the Egyptian military and internal security forces have coordinated a crackdown for the hours ahead in an effort to clear the streets of the demonstrators. The interior minister has meanwhile negotiated his stay for the time being, in spite of widespread expectations that he, seen by many Egyptians as the source of police brutality in the country, would be one of the first ministers that would have to be sacked in order to quell the demonstrations. Instead, both Egyptian President Hosni Mubarak and al-Adly, the two main targets of ire for the demonstrators, seem to be betting that they can ride this crisis out and remain in power. So far, the military seems to be acquiescing to these decisions.

The real test for the opposition has thus arrived. In spite of a minor reshuffling of the Cabinet and the military reasserting its authority behind the scenes, Mubarak and al-Adly remain in power. The opposition is unified in its hatred against these individuals, yet divided on most everything else. The Muslim Brotherhood’s Islamist platform, for example, is very different from opposition figure Mohamed ElBaradei’s secularist campaign, which explains why no one has been able to assume leadership of the demonstrations. In evaluating the situation on the streets, the regime appears willing to take a gamble that the opposition will not cohere into a meaningful threat and that an iron fist will succeed in putting down this uprising.

Within the next few hours, police and military officials are expected to redeploy in large numbers across major cities, with the CSF taking the first line of defense. Tensions are still running high between the internal security forces and the military, which could lead to serious clashes between the army and police on the streets. The size and scope of the protests appear to be dwindling into the low thousands, though there is still potential for the demonstrations to swell again after protesters rest themselves and wake up to the same government they have been trying to remove. Moreover, as the events of Jan. 28 and 29 illustrated, protesters are far more likely to clash with the CSF than with the military.

A deadly clash in front of the Interior Ministry Jan. 29 demonstrated the varying tensions between the protesters on one side and the military versus the police on the other. According to a STRATFOR source, Al-Adly was attempting to escape the Interior Ministry under heavy protective detail Jan. 29 when he came under attack. The CSF reportedly shot dead three protesters attempting to storm the building. Eyewitness reports later came out claiming that the army had to step in and set up a barrier between the protesters and the CSF to contain the crisis.

The demonstrators are still largely carrying with them the perception that the military is their gateway to a post-Mubarak Egypt and the CSF is representative of the regime they are trying to topple. It remains to be seen how much longer that perception of the military holds. A curfew in Cairo, Alexandria and Suez has been extended from 3 p.m. to 8 a.m. local time. In the hours ahead, it will become clearer whether the redeployment of the internal security forces will contribute to improving security and the government’s control or whether their presence will simply further stoke the flames

AFP/Getty Images
Egyptian riot police gather near a protest in Cairo on Jan. 26

Intelligence Guidance: The Situation in Egypt

January 27, 2011 0413 GMT
In the face of the unrest in Egypt, STRATFOR's job is to sort through all the claimants and wannabees of this revolution and find out who the main powers really are. [more]

The Egypt Crisis in a Global Context: A Special Report

January 30, 2011 2253 GMT
Several scenarios exist in which the political outcome in Egypt would have profound effects on the way the world works. [more]

January 30, 2011 2240 GMT
Egyptian Interior Minister Habib al-Adly has reportedly ordered the redeployment police patrols and Central Security Forces Jan. 30 after being glaringly absent from the streets the day before. [more]

January 30, 2011 0034 GMT
A struggle between Egypt's army and police officers is creating mayhem in the streets. [more]

The Egyptian Unrest: A Special Report

January 29, 2011 2207 GMT
The ability of Egypt's security establishment to hold together -- and thus the fate of the country -- lies in the hands of the military. [more]
*This article is being posted from Toronto, Canada By DTN News ~ Defense-Technology News, contact: dtnnews@ymail.com

Source: DTN News - - This article compiled by Roger Smith from reliable sources By Babar Dogar -AP Associated Press
(NSI News Source Info) LAHORE, Pakistan - January 30, 2011: Hard-line Islamic leaders on Sunday rallied at least 15,000 people against an American official arrested in the shooting deaths of two Pakistanis and warned the government not to cave in to U.S. pressure to release the man.

The protest in the eastern city of Lahore, where the shootings took place, came as the U.S. Embassy once again insisted that the American has diplomatic immunity and was being detained illegally by Pakistan. But Pakistan has refused to budge, saying the matter must be decided by the courts. 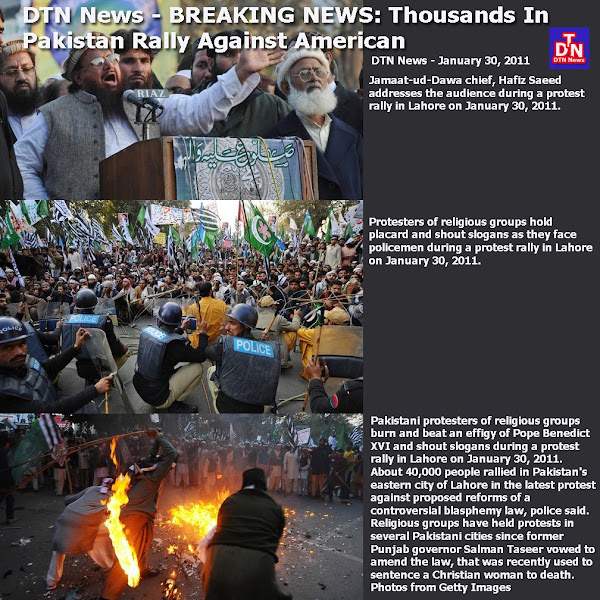 The spat has revealed the fragility of a relationship Washington believes is crucial for success in Afghanistan and against al-Qaida. Large protests by hard-line Islamic groups, which have significant influence in Pakistan, could make it even more difficult for the government to free the American.

"We warn the government and administration that ... if they help the arrested American illegally, then this crowd will surround the U.S. Embassy and presidential palace in Islamabad," Hafiz Hussain Ahmed, a senior official in the Jamiat Ulema Islam party, said during Sunday's rally.

The U.S. has said the American, who has not been named, acted in self-defense when he shot two armed men who approached his car in Lahore on Thursday.

But many questions have been left unanswered, including exactly what the American did at the U.S. Embassy and why he was carrying a gun. The lack of clarity has fueled media speculation he may have been a CIA agent or security contractor, as well as questions over whether he qualified for diplomatic immunity.

The embassy attempted to provide a little more clarity in a press release Sunday titled "Facts About Diplomatic Immunity." It said the man is a member of the embassy's "technical and administrative staff" and thus enjoyed the same criminal immunity that all diplomats have under the Vienna Convention on Diplomatic Relations.

But legal arguments are unlikely to sway ordinary Pakistanis, many of whom dislike the U.S. and distrust their government in its dealings with Washington. This animosity is especially pronounced among hard-line Islamic groups, which oppose the war in Afghanistan and object to Pakistan's alliance with the U.S. in fighting the Taliban and al-Qaida.

Sunday's demonstration was organized by Jamaat-ud-Dawa, which is widely believed to be a front for the militant group that attacked the Indian city of Mumbai in 2008 and killed 166 people. The rally was originally called to protest changes to Pakistani laws that mandate the death penalty for insulting Islam. But many of the speakers used the opportunity to stoke anger over the recent shootings.

"An American scoundrel has killed two innocent youths in the streets of Lahore," said the leader of Jamiat Ulema Islam, Maulana Fazlur Rahman. "It should be decided in the courts and any decision beyond the courts will not be acceptable to us. There should be an end to American hegemony in Pakistan."

Lahore police chief Aslam Tareen said there were between 15,000 and 20,000 people at the rally in the center of the city.

The protest leaders paraded two men who they said were brothers of the shooting victims. The men joined protesters in shouting "any friend of America is a traitor." Others held signs that said "Punish the American Killer" and "Hang this American in Public."

The leader of Jammat-e-Islami, Syed Munawar Hasan, criticized the Pakistani government for allowing armed diplomats to move around the country.

A senior U.S. official has said the American man was authorized by the U.S. to carry a weapon, but that it was a "gray area" whether Pakistani law permitted him to do so. The official spoke on condition of anonymity because of the sensitivity of the issue.

The American was taken into custody soon after the shooting and appeared in court Friday for an initial hearing. U.S. officials were granted access to him only late the same day, soon after prosecutors said they would pursue possible murder charges against him.

A third man died when he was allegedly hit by an American car that rushed to the scene to help the U.S. official. Pakistani police have said they want to question the driver of that vehicle as well.