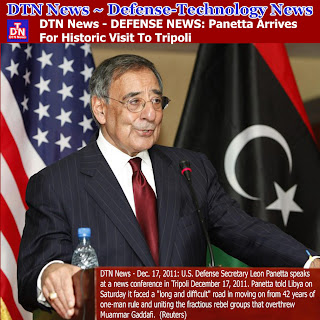 Panetta became the first U.S. defense secretary to visit Libya, arriving just two months after the Libyans overthrew Moammar Gadhafi’s repressive regime that had gripped the country since 1969.
He is scheduled to meet with Libyan Prime Minister Abd al-Raheem Al-Keeb and Defense Minister Usama Al-Jwayli. Army Gen. Carter Ham, commander of U.S. Africa Command, is slated to accompany him.
“I hope to pay tribute to [the Libyans] and to offer them whatever support we can to assist them in ensuring that they can put the institutions of democracy in place [and] give the Libyan people the opportunity to vote for a representative government,” the secretary told reporters traveling with him before arriving here.
Panetta said during a media roundtable yesterday in Ankara, Turkey, that the Libyans will need time to assess exactly what their needs are and what steps they need to take moving forward.
“The last thing you want to do is try to impose something on a country that has just gone through what the Libyans have gone through,” he said. “They have earned the right to try to determine their future. They have earned the right to try to work their way through the issues they are going to have to confront.”
But in doing so, Panetta said the United States, along with NATO and the international community, all want to provide Libya what it needs to succeed. “And we will do whatever we can to encourage them to move in the right direction,” he said.
The hope, the secretary said, is to enable the Libyans to establish a democracy that will be “another symbol and indication that the Middle East should be headed in for the future.”
In many ways, Libya represents “the ultimate of what the ‘Arab spring’ should be about,” Panetta said. “The Libyan people were able to bring down Gadhafi, … with support of the NATO mission,” he said. “It represents a situation where that country is handed back to the Libyan people.”
Panetta called the developments in Libya an indication of changes taking place throughout the region.
“This is a turning point that we have all been a part of,” he said. “Most importantly, a lot of this is due … to the sacrifice and commitments of our troops and the great work that they have done over these last few years.”
Panetta is expected to extend U.S. hopes of resetting what previously had been a turbulent relationship with Gadhafi’s military, and to offer U.S. security assistance down the road in an effort to develop a new defense and security relationship with Libya, a senior defense official traveling with him said.
The leaders are likely to discuss ways they can cooperate on issues of mutual concern such as weapons proliferation, the security of not-yet-destroyed chemical weapons stocks and regional terrorism, the official said. The discussions also are expected to include Libya’s efforts to reconcile disparate militias that were able to cooperate to topple Gadhafi, but have not yet coalesced into a united military force.
“We stand ready as this new interim government is still in stages of getting itself organized to respond to their requests for assistance and consolidating the different militias into a unified military force,” he said.
The Defense Department has a small number of people attached to the U.S. Embassy in Libya who are assisting in explosive ordnance disposal, providing advice on security chemical weapons stocks and helping establish embassy security, the official said.
The secretary also will lay a wreath at the graves of U.S. sailors lost aboard the USS Intrepid Sept. 4, 1804.
Their mission was to use the explosives-laden Intrepid as a floating bomb to destroy pirate ships moored in Tripoli harbor during the First Barbary War. The vessel is believed to have been intercepted as it entered the harbor, with the violent explosion that ensued killing Navy Lt. Richard Somers, its commander, and his dozen officers and sailors.
Their remains were transferred to the current graveyard in 1949.
The 2012 Defense Authorization Act, as passed by the House in December, includes a provision that requires the Defense Department to begin the process of identifying and returning Somers and his sailors to the United States.
Specifically, the bill instructs the secretaries of defense and the Navy to report back to Congress on the feasibility of recovering and positively identifying the missing commandos.


*This article is being posted from Toronto, Canada By DTN News ~ Defense-Technology News