Source: DTN News - - This article compiled by Roger Smith from reliable sources By Ibrahim Barzak and Karin Laub - The Washington Post(NSI News Source Info) TORONTO, Canada - March 12, 2012: Cross-border fighting between Gaza and Israel, touched off by Israel’s killing of a top Palestinian militant leader, showed no signs of letting up after three days Sunday. Gaza militants fired dozens of rockets at Israeli towns, hitting an empty school, and Israeli airstrikes killed three Gazans, including a boy and a farm guard. 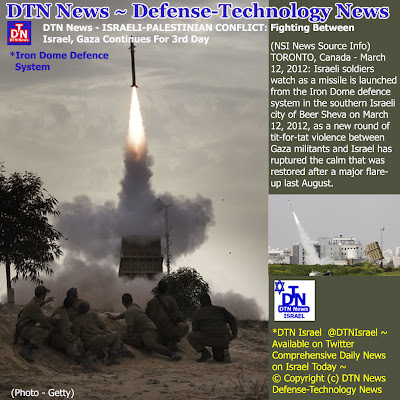 Egypt tried to mediate but failed to end the violence, the worst in more than a year. The fighting has killed 18 Gazans, all but two of them militants, and disrupted the lives of about 1 million Israelis living within range of rocket fire from Gaza.
Even so, Israel and Gaza’s Hamas rulers seemed eager to avoid a full-scale conflict. A three-week war three years ago left both sides badly bruised, Israel in the diplomatic arena and Hamas on the battlefield.
In the current round, Hamas has pointedly kept its large rocket arsenal and thousands of fighters out of the confrontation, even though it has not tried to stop two smaller Gaza groups, Islamic Jihad and the Popular Resistance Committees, from launching rockets and mortar rounds.
Israeli Defense Minister Ehud Barak acknowledged that Hamas did not take part in the rocket salvos. Up to now, Israel has blamed the Islamist movement for all violence directed from Gaza because it rules the territory.
Israel’s military chief, Lt. Gen. Benny Gantz, said Sunday, “We are not interested in escalation in and of itself.”
On a visit to southern Israel, Prime Minister Benjamin Netanyahu pledged that the airstrikes would continue as long as necessary. “We have a clear policy: We will hit anyone who plans to harm us, who prepares to harm us and who harms us,” he said in a meeting with local leaders.
Israel said it launched the initial Friday airstrike, which killed PRC leader Zuhair al-Qaissi in a car in Gaza, to stop a plan by his splinter group to infiltrate into Israel through Egypt’s lawless Sinai Peninsula. Israel says the PRC was behind an August attack on the border that killed eight Israelis.
Palestinians across the political spectrum accused Israel of deliberately escalating tensions. The groups involved in firing rockets dismissed truce offers presented by Egypt.
On Sunday, Palestinians fired more than 30 rockets at southern Israel. One struck the courtyard of an empty school in Beersheba, police said.
Three Israelis have been hurt by rocket fire since Friday, two of them seriously, the Defense Ministry said.
At Israel’s weekly cabinet meeting, Barak asserted success in the first major battlefield test of the Iron Dome antimissile system, which has intercepted 30 of the more than 120 rockets fired from Gaza since Friday, according to a statement from his office. He said anti-rocket batteries were deployed near three southern cities close to Gaza.
*Link for This article compiled by Roger Smith from reliable sources By Ibrahim Barzak and Karin Laub - The Washington Post*Speaking Image - Creation of DTN News ~ Defense Technology News *This article is being posted from Toronto, Canada By DTN News ~ Defense-Technology News Contact:dtnnews@ymail.com ©COPYRIGHT (C) DTN NEWS DEFENSE-TECHNOLOGY NEWS 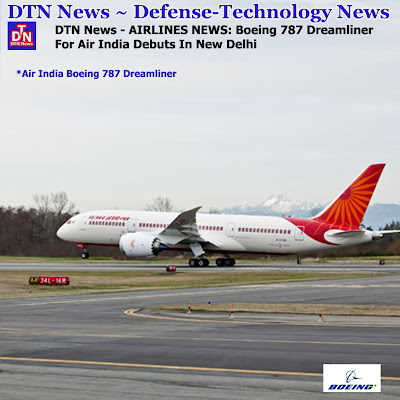 "We're proud to bring the world's most advanced commercial airplane to India, especially when it proudly displays the colors of national flag carrier Air India," said Dinesh Keskar, senior vice president of Asia Pacific and India Sales for Boeing Commercial Airplanes. "This week even more of our airlinecustomers will experience the game-changing technologies and innovations the 787 has to offer."
The 787 will be on static display in New Delhi before debuting at India Aviation 2012 in Hyderabad on March 14. The Dreamliner that will be showcased is outfitted in Air India's livery and an inviting passenger interior featuring full business and economy-class cabins.
Made from composite materials, the Boeing 787 Dreamliner is the first airplane to provide both long distance capabilities with mid-size capacity. This capability will allow airlines like Air India to profitably operate non-stop routes to many more distant cities, providing choices preferred by the traveling public.
As a result of innovative technologies, the airplane offers unparalleled operating economics, fuel efficiency and passenger comfort. More than 800 787s are on order by 60 customers, a testament to the airplane's unique capabilities.