Source: DTN News - - This article compiled by Roger Smith from reliable sources By Zarar Khan And Sebastian Abbot - Associated Press
(NSI News Source Info) TORONTO, Canada - June 23, 2013:  Islamic militants disguised as policemen killed 10 foreign climbers and a Pakistani guide in a brazen overnight raid against their campsite at the base of one of the world's tallest mountains in northern Pakistan, officials said Sunday. 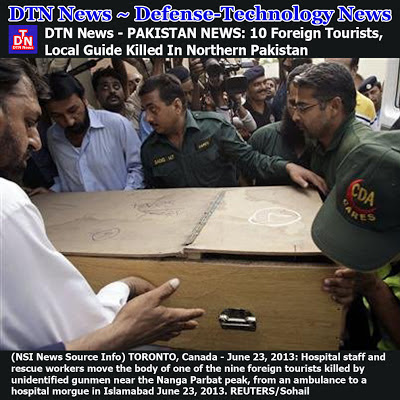 The Pakistani Taliban claimed responsibility for the attack at the base camp of Nanga Parbat, saying it was to avenge the death of their deputy leader in a U.S. drone strike last month.

The attack took place in an area that has largely been peaceful, hundreds of kilometers (miles) from the Taliban's major sanctuaries along the Afghan border. But the militant group, which has been waging a bloody insurgency against the government for years, has shown it has the ability to strike almost anywhere in the country.
The Taliban began their attack by abducting two local guides to take them to the remote base camp in Gilgit-Baltisan, said Pakistani Interior Minister Chaudhry Nisar Ali Khan. One of the guides was killed in the shooting, and the other has been detained for questioning. The attackers disguised themselves by wearing uniforms used by the Gilgit Scounts, a paramilitary force that patrols the area, Khan said.
Around 15 gunmen attacked the camp at around 11 p.m. Saturday, said the Alpine Club of Pakistan, which spoke with a local guide, Sawal Faqir, who survived the shooting. They began by beating the mountaineers and taking away any mobile and satellite phones they could find, as well as everyone's money, said the club in a statement.
Some climbers and guides were able to run away, but those that weren't were shot dead, said the club. Faqir was able to hide a satellite phone and eventually used it to notify authorities of the attack.
Attaur Rehman, the home secretary in Gilgit-Baltistan, said 10 foreigners and one Pakistani were killed in the attack. The dead foreigners included three Ukrainians, two Slovakians, two Chinese, one Lithuanian, one Nepalese and one Chinese-American, according to Rehman and tour operators who were working with the climbers. Matt Boland, the acting spokesman at the U.S. Embassy in Islamabad, confirmed that an American citizen was among the dead, but could not say whether it was a dual Chinese national.
The shooting — one of the worst attacks on foreigners in Pakistan in recent years — occurred in a stunning part of the country that has seen little violence against tourists, although it has experienced attacks by radical Sunni Muslims on minority Shiites in recent years.
Pakistani Taliban spokesman Ahsanullah Ahsan claimed responsibility for the attack, saying their Jundul Hafsa faction carried out the shooting as retaliation for the death of the Taliban's deputy leader, Waliur Rehman, in a U.S. drone attack on May 29.
"By killing foreigners, we wanted to give a message to the world to play their role in bringing an end to the drone attacks," Ahsan told The Associated Press by telephone from an undisclosed location.
The U.S. insists the CIA strikes primarily kill al-Qaida and other militants who threaten the West as well as efforts to stabilize neighboring Afghanistan. In a recent speech, President Barack Obama outlined tighter restrictions on the highly secretive program.
Pakistani Prime Minister Nawaz Sharif, who wants to pursue peace talks with militants threatening his country, has insisted the U.S. stop the drone strikes, saying they violate Pakistan's sovereignty and are counterproductive because they often kill innocent civilians and stoke anti-U.S. sentiment in this nation of 180 million.
Sharif responded to the attack on the camp by vowing "such acts of cruelty and inhumanity would not be tolerated and every effort would be made to make Pakistan a safe place for tourists."
Officials expressed fear the attack would deal a serious blow to Pakistan's tourism industry, already struggling because of the high level of violence in the country.
The interior minister promised to take all measures to ensure the safety of tourists as he addressed the National Assembly, which passed a resolution condemning the incident. 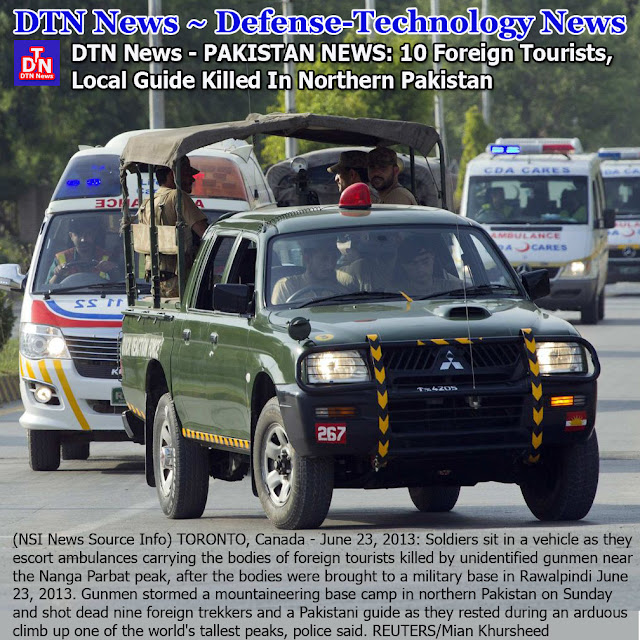 "A lot of tourists come to this area in the summer, and our local people work to earn money from these people," said Syed Mehdi Shah, the chief minister of Gilgit-Baltistan. "This will not only affect our area, but will adversely affect all of Pakistan."
He said the base camp was cordoned off by police and paramilitary soldiers after the attack, and a military helicopter searched the area.
Volodymyr Lakomov, the Ukrainian ambassador to Pakistan, also condemned the attack and said, "We hope Pakistani authorities will do their best to find the culprits of this crime."
Many foreign tourists stay away from Pakistan because of the country's reputation as being a dangerous place. But a relatively small number of intrepid foreigners visit Gilgit-Baltistan during the summer to marvel at the towering peaks in the Himalayan and Karakoram ranges, including K2, the second-highest mountain in the world.
An even smaller group tries to climb them. Nanga Parbat is over 8,000 meters (26,250 feet) tall and is notoriously difficult to summit. It is known as the "killer mountain" because of numerous mountaineering deaths in the past.
Pakistan has very close ties with neighboring China and is sensitive to any issue that could harm the relationship. Pakistani officials have reached out to representatives from China and Ukraine to convey their sympathies, the Foreign Ministry said.
The government suspended the chief secretary and top police chief in Gilgit-Baltistan following the attack and ordered an inquiry into the incident, said Khan, the interior minister.
The shooting was one of the worst attacks on foreigners in Pakistan in the last decade. A suicide attack outside a hotel in the southern city of Karachi killed 11 French engineers in 2002. In 2009, gunmen attacked the Sri Lankan cricket team in the eastern city of Lahore, killing six Pakistani policemen, a driver and wounding several players.
___
Associated Press writer Rasool Dawar contributed to this report from Peshawar, Pakistan.

Oman Air to buy 5 new aircraftOman Daily ObserverThe deal was concluded against the backdrop of the 2013 Paris Air Show. With this order, Oman Air becomes the first customer in the Arabian Gulf region to order 737-900ERs. Currently, the airline operates a fleet of 15 Boeing Next-Generation 737-800s ...See all stories on this topic »

BUSINESS - Boeing gets $38 bln ordersU.S. aerospace giant Boeing said that it had booked firm aircraft orders worth up to $38 billion (28.7 billion euros) at the Paris Air Show. In a French-language ...www.hurriyetdailynews.com/boeing-gets-38-bln-orders.aspx?...