L-3 Global Communications Solutions of Victor, N.Y., was awarded a modification to increase the contract ceiling by $40,000,000 to a new not-to-exceed amount of $157,000,000. This is an indefinite delivery, indefinite quantity firm-fixed price contract for procurement and sustainment of Special Operations Forces deployable node-medium very small aperture terminal and small aperture terminals satellite antennas in support of U.S. Special Operations Command Headquarters Procurement Division. The work will be performed in Victor. Procurement actions are expected to be completed by Aug. 30, 2012, and sustainment actions are scheduled to be completed by Sept. 30, 2015. The contract number is H92222-06-D-0007. 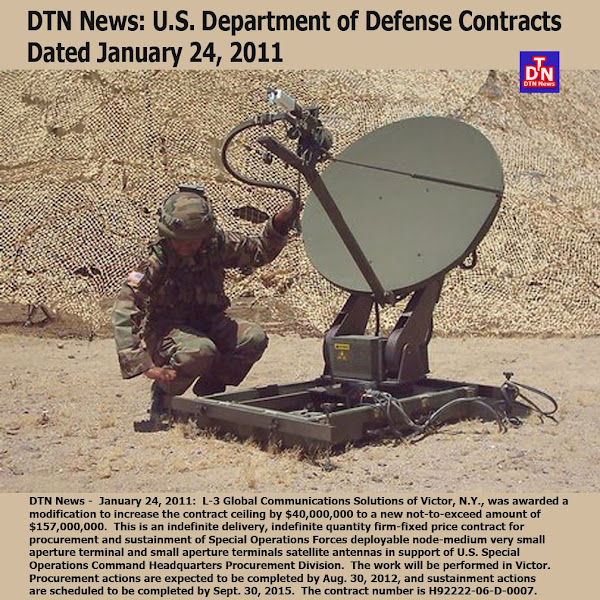 IAP Worldwide Services, Inc., Cape Canaveral, Fla., was awarded a $7,801,227 firm-fixed-price contract Jan. 19, 2011. The award will provide for services necessary in order to support locations, facilities and operations, and for the construction of temporary facilities and structures as required to enable Joint Counter Intelligence Unit-Iraq operations. Work will be performed in Iraq, with an estimated completion date of Jan. 17, 2014. Three bids were solicited with three bids received. The U.S. Army Corps of Engineers, Middle East District, Winchester, Va., is the contracting activity (W912ER-11-C-0014).

DRS Technical Services, Inc., Herndon, Va., was awarded a $7,100,000 firm-fixed-price contract Jan. 20, 2011. The awarded will provide for 195 Codan Base Stations, 300 Codan high frequency mobile radios and 150 Codan high frequency man-pack radios for the Afghan National Police. Work will be performed in Afghanistan, with an estimated completion date of March 31, 2011. The bid was solicited through the Internet with five bids received. The U.S. Army Kabul Regional Contracting Center, Kabul, Afghanistan, is the contracting activity (W91B4M-11-P-4177).

Longbow, LLC (LBL), Orlando, Fla., was awarded a $6,869,261 cost-plus-fixed-fee contract Jan. 20, 2011. The award will provide for engineering services for the Hellfire and Longbow missile requirements. Work will be performed in Orlando, Fla., with an estimated completion date of Sept. 30, 2012. One bid was solicited with one bid received. The U.S. Army Aviation and Missile Command, Redstone Arsenal, Ala., is the contracting activity (W31P4Q-10-C-0256).

A.T. Kearney, Vienna, Va., is being awarded a $23,300,000indefinite-delivery/indefinite-quantity, fixed-price contract for the acquisition of services for the facilitation and execution of standardization and life cycle cost analysis studies to develop shelf recommendations for Naval Sea Systems Command and Naval Surface Warfare Center's commonality program over a period of three years. The required services (Deep Dives) project methodology involves extremely detailed analysis through many layers of data held at various locations such as Navy data repositories, shipbuilder's records, original equipment manufacturer records, DoD data bases and federal government data bases. Work will be performed in Philadelphia, Pa. (60 percent); Norfolk, Va. (10 percent); Dahlgren, Va., (10 percent); Crane, Ind. (10 percent); Indian Head, Md. (10 percent), and is expected to be completed by July 2014. Contract funds in the amount of $647,222 will expire at the end of the current fiscal year. This contract was not competitively procured. This procurement was processed without providing for full and open competition under statutory authority 10 U.S.C. 2304(c) (1), only one responsible source and no other supplies or services will satisfy agency requirements (FAR 6.302-1). The Naval Surface Warfare Center, Carderock Division, Ship System Engineering Station, Philadelphia, Pa., is the contracting activity (N65540-11-D-0003).

Computational Physics, Inc.,* Springfield, Va., is being awarded a $13,986,544 cost-plus-fixed-fee contract for scientific and engineering research and development services to support the development and application of new and existing techniques for remote sensing (including astronomy). Tasks include: supporting concept design and feasibility studies, assembly and testing of components or equipment laboratory, in-field or in-flight (in-air or in-space) calibration, validation and operation of deployed systems, analysis of engineering and scientific data; and the development and use of algorithms for analyzing the data. Work will be performed in the contractor's facility at the Naval Research Laboratory, Washington, D.C., and work is expected to be completed January 2015. The amount being awarded at this time is $100,000 and the total cumulative face value of the contract is 13,986,544. Contract funds in the amount of $100,000 will expire June 2011. The contract was 100 percent small business set aside by the Naval Research Laboratory under request for proposal number N000173-10-R-AT04. Naval Research Laboratory, Washington, D.C., is the contracting activity (N00173-11-C-2002). 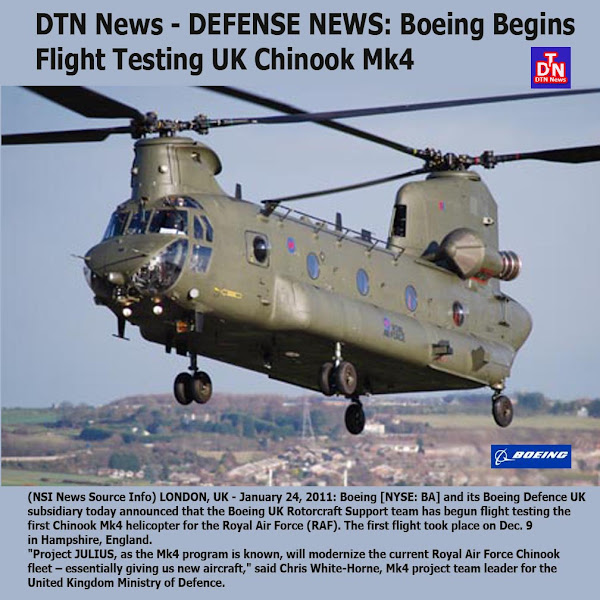 A major part of the modification for both the Mk4/4A and Mk5 aircraft is the Thales TopDeck cockpit. Thales UK is under contract with Boeing to supply its Cockpit Display System/Mission Avionic System, which will provide improved situational awareness, increased safety and options for capability enhancement. The upgraded and integrated cockpit display includes four multifunction displays, two stand-by flight displays, updated communications interfaces, and two new air data computers.

"The first of the modified JULIUS Chinook helicopters is expected to be available to commanders before the end of 2011," said David Pitchforth, managing director, Boeing UK Rotorcraft Support. "The entire Mk2 fleet will be fitted with the JULIUS cockpit by early 2015, followed by Mk2A and Mk3 modifications by 2015 and 2016, respectively."

The modifications also include the addition of a third crew-member seat and an update of Airworthiness & Safety Certification and Qualification for the modernized Chinook. The aircraft are being modified at the Gosport Fleetlands facility operated by Vector Aerospace, Boeing's principal subcontractor for deep support of the RAF Chinook fleet. Vector Aerospace has established a dedicated production line at Fleetlands to support the JULIUS program, with specialist component manufacture provided from its Almondbank facility near Perth, Scotland.

"Vector Aerospace is delighted to be associated with this significant milestone. It is a testimony to the skill and dedication of our teams in Fleetlands and Almondbank, who have worked in a spirit of true partnership with our customer Boeing and the key equipment suppliers," said Tim Rice, managing director, Vector Aerospace UK.

A wholly owned subsidiary of The Boeing Company and a business unit of Boeing Defense, Space & Security, Boeing Defence UK Ltd. currently has employees at 20 locations throughout the UK supporting Ministry of Defence and U.S. military programs.

A unit of The Boeing Company, Boeing Defense, Space & Security is one of the world's largest defense, space and security businesses specializing in innovative and capability-driven customer solutions, and the world's largest and most versatile manufacturer of military aircraft. Headquartered in St. Louis, Boeing Defense, Space & Security is a $34 billion business with 68,000 employees worldwide. Follow us on Twitter: @BoeingDefense.

Military officials say it is likely the Chinese were able to develop the stealth technology from parts of an American F-117 Nighthawk that was shot down over Serbia in 1999. 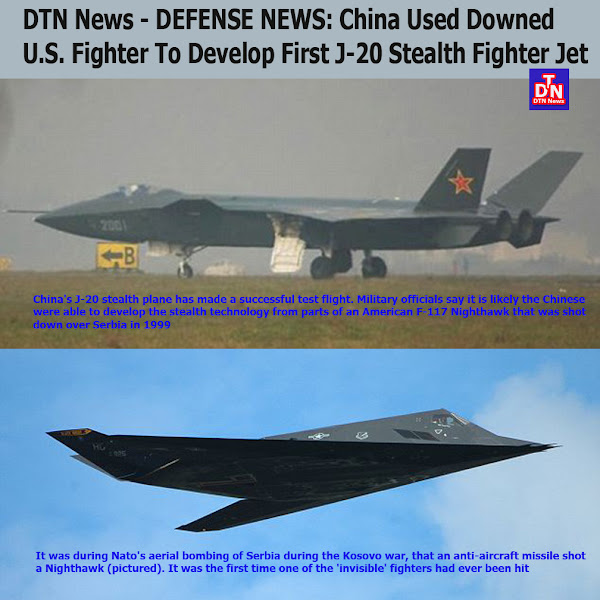 During Nato’s aerial bombing of the country during the Kosovo war, a Serbian anti-aircraft missile shot the Nighthawk. It was the first time one of the ‘invisible’ fighters had ever been hit.

The Pentagon believed a combination of clever tactics and luck had allowed a Soviet-built SA-3 missile to bring down the jet.

The pilot ejected and was rescued but the wreckage was strewn over a wide area of farmland.

Civilians collected the parts – some the size of small cars – as souvenirs.

‘At the time, our intelligence reports told of Chinese agents crisscrossing the region where the F-117 disintegrated, buying up parts of the plane from local farmers,’ says Admiral Davor Domazet-Loso, Croatia’s military chief of staff during the Kosovo war.

‘We believe the Chinese used those materials to gain an insight into secret stealth technologies... and to reverse-engineer them.’

A senior Serbian military official confirmed that pieces of the wreckage were removed by souvenir collectors, and that some ended up ‘in the hands of foreign military attaches’.

In what appears to be a clear message of its military might, China staged the first test flight of the new stealth jet earlier this month - at the same time that U.S. defence chief Robert Gates was in Beijing on the second day of an official visit.

The fighter jet's successful test follows reports that China is planning to launch its first aircraft carrier and has tested a ballistic missile capable of sinking U.S. vessels in the Pacific.

The prototype jet was shown in flight, with civilians and air force personnel watching on, in pictures on several unofficial Chinese military websites, after local media outlets had claimed a successful test flight had taken place.

While the Chinese government is renowned for its stringent approach to state secrets, photos and reports of the J-20's test have remained online.

According to international agencies, the scheduling of the test flight to coincide with Mr Gates' visit to China, coupled with the seemingly relaxed approach to reports about the flight, indicated Beijing's willingness to be more open about its military intentions.

Nonetheless, reports of the stealth's successful test will do little to quell anxieties about the speed of China's military progress.

The U.S. F-22 Raptor is currently the only operational stealth fighter in the world, while Russia's Sukhoi T-50 jet is expected to enter active service in the next four years.

But pictures of China's J-20, which looks larger than the F-22 or T-50, will be of concern to the Taiwanese government, whose antiquated aircraft and radar systems would provide little resistance to radar-evading Chinese jets.

The U.S. has claimed China would not be capable of developing a stealth jet for years and production of the F-22 was recently capped.

But the J-20's successful test, coupled with reports of the development of an aircraft carrier and missile system, confirms China's growing military might.

SPY TECH: HOW THE J-20 SHAPES UP AGAINST ITS RIVALS

A study of photographs of the aircraft by industry journal Aviation Week revealed the J20...