Source: DTN News - - This article compiled by Roger Smith from reliable sources Ministry of  Defence - Norway(NSI News Source Info) TORONTO, Canada - June 18, 2012: Norway today (June 15) commenced the largest public procurement project in its history. The event was marked by Minister of Defence Espen Barth Eide authorizing the order for the first F-35A Lightning II for the Norwegian Armed Forces. The decision to move forward was reached following an extended dialogue with the US Department of Defence aimed at securing opportunities for Norwegian industry.

Chief of The Air Force Major General Finn Kristian Hannestad and Defence Minister Espen Barth Eide at the press conference 15 June 2012. (Christian Nørstebø, Forsvarets Forum)
- We have today made two critical decisions. For the first time in three decades we are now ordering new combat aircraft for the Armed Forces. Additionally, we will begin preparations for the final phase of Joint Strike Missile (JSM) development after receiving confirmation from US authorities of their support for the integration of the missile into the F-35, says Norwegian Minister of Defence Espen Barth Eide. 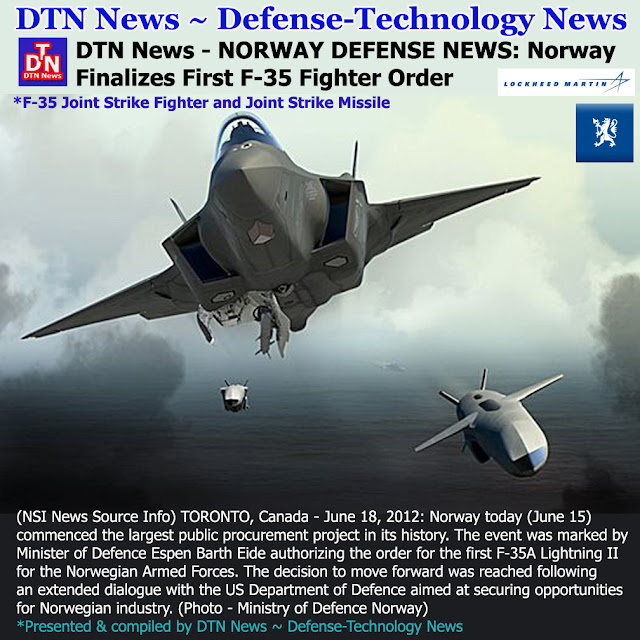 F-35 Joint Strike Fighter and Joint Strike Missile.
- This marks a key milestone in the Norwegian F-35 programme and the beginning of the largest public procurement in Norwegian history. The F-35, which Norway selected in 2008, represents a completely new generation of combat aircraft that will form a corner stone of the future Norwegian Armed Forces, says Minister of Defence Espen Barth Eide.
Confirmation of JSM integration support was provided in a letter from US Secretary of Defence, Leon Panetta to Norwegian Minister of Defence Espen Barth Eide earlier this week.
- Securing such support has been an important precondition for many of our partner nations before they would themselves commit to supporting the JSM. With such support finally in place there is now a significant potential for the missile among future operators of the F-35. Preparations for the final phase of procurement will therefore begin now, says Minister of Defence Espen Barth Eide.
The Norwegian-developed JSM represents one of the most advanced weapons available within its category, and will further enhance the operational capabilities of the F-35. Total market potential for the JSM is estimated to be between NOK 20 and 25 billion/USD 3.3 and 4.2 billion.
The two aircraft authorized today are expected to be joined by a second pair in 2016, and will be based in the United States as part of a joint partner training centre. They are to be followed by up to 48 additional aircraft from 2017 that are to be based at Ørland Main Air Station in central Norway. A small forward operating base will also be based at Evenes in northern Norway to provide quick reaction alert (QRA) services in the high north. An estimated 10% of the overall force generation will also be carried out from the Evenes FOB.
The overall cost of the procurement phase of the project is estimated at NOK 60 billion/USD 10 billion (2012 value) in real terms.
The decision to centralise the combat aircraft force at Ørland was approved when the Norwegian Parliament approved the new Defence White Paper on the 14th of June. This paper also confirmed the overall ambition for up to 52 F-35s for the Norwegian Armed Forces. Norway will over the coming years see a budget increase of 7% by 2016 through redistribution of funds freed up by the withdrawal from Afghanistan and the addition of significant supplementary funds for the F-35 purchase.
- Norway's parliament yesterday approved a significant increase in defence spending in order to finance the purchase and to increase the general operating budget of the Armed Forces. At the same time, the Parliament has shown courage in making tough but necessary decisions in order to continue the work to rationalize the base infrastructure. This means that the positive development we have seen in the Norwegian Armed Forces over the past four years will continue, concludes Minister of Defence Espen Barth Eide.
*Link for This article compiled by Roger Smith from reliable sources Ministry of Defence, Norway*Speaking Image - Creation of DTN News ~ Defense Technology News *This article is being posted from Toronto, Canada By DTN News ~ Defense-Technology News Contact:dtnnews@ymail.com ©COPYRIGHT (C) DTN NEWS DEFENSE-TECHNOLOGY NEWS

Source: DTN News - - This article compiled by Roger Smith from reliable sources The Globe & Mail(NSI News Source Info) TORONTO, Canada - June 18, 2012: Asian stock markets were up sharply Monday after elections in Greece eased fears of global financial turmoil, but analysts warned that the economic crisis shaking the 17 nations that use the euro was far from over. Stock markets rejoiced at the narrow victory by Greek conservatives who favour upholding an austerity program that their recession-mired country entered into in exchange for a financial bailout from international lenders. 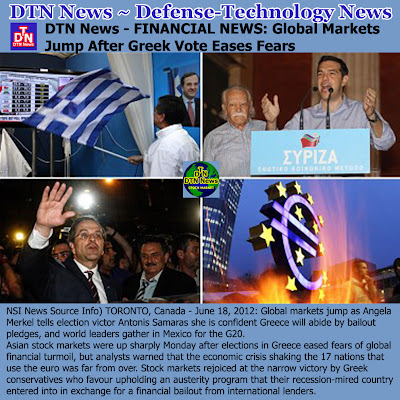 Tokyo’s benchmark Nikkei 225 index was up 1.9 per cent at 8,731.57. Hong Kong’s Hang Seng rose 1.6 per cent to 19,548.83. Australia’s S&P/ASX200 added 1.8 per cent to 4,129.20 and South Korea’s Kospi rose 2.1 per cent at 1,897.62.On Wall Street, Dow Jones industrial average futures were up 62 points on Sunday night, suggesting the market could open higher Monday. The euro rose to $1.2700 (U.S.) from $1.2637 late Friday in New York. The U.S. dollar rose to 79.22 yen from 78.71 yen.
The New Zealand and Australian dollars were also higher. Both currencies typically rise when investors have more appetite for risk. The Australian dollar was trading above $1.01 and the New Zealand dollar was trading above 79 cents.
Masahiro Yamaguchi, a manager at Mizuho Securities Co. in Tokyo, said the perk in Tokyo stocks came from a sense of relief that the worst had been avoided in Greece.
“There’s is a rebound simply because the risks are now reduced,” he said. “There’s a sense that, at least, things are okay for now. The solution is far from basic.”
On Sunday, pro-bailout parties in Greece won enough seats to form a coalition government.
Greece has been dependent on rescue loans to operate since May 2010, after it was shut out of international markets following years of profligate spending and falsifying financial data.
The country is mired in a fifth year of recession, with unemployment spiralling above 22 per cent and tens of thousands of businesses shutting down.
Greece had to agree to austerity measures to get its bailout. Measures included deep spending cuts on everything from health care to education and infrastructure as well as tax hikes and cuts in salaries and pensions. Anger at the measures has sent Greeks into the streets in frequent strikes and protests, some of them violent.
Some analysts said the election results could overstate the willingness of Greeks to embrace austerity.
“Overall, the Greek election result, while welcome, does not imply that the Greek people are embracing the tough reforms tied to the bailout package. It merely meant that fear overruled anger,” analysts at DBS Bank Ltd. in Singapore wrote in a market commentary.
No one is sure how bad a Greek exit from the euro would have been. Greece would almost have certainly defaulted on its debt, triggering losses for European banks that own its government bonds. The outcome of the election, however tenuous, gives Greece a chance to breathe life into its moribund economy.
“It will be tough, but Greece will survive because I think the tourist industry and the agriculture sector will help it recover from its dire straits right now,” said Francis Lun, managing director of Lyncean Holdings in Hong Kong.Japanese vehicle makers soared on hopes that Europe, a huge export market, would avoid deepening economic turbulence. Mazda Motor Corp. jumped 4 per cent and Yamaha Motor Co. gained 4.5 per cent.
Steelmakers and shipyards also gained ground. South Korea’s top shipbuilder, Hyundai Heavy Industries, rose 3.1 per cent. Japan’s JFE Holdings Inc. added 4 per cent and Kobe Steel rose 3.3 per cent.Samsonite International SA rebounded 5.8 per cent after it issued a statement saying its luggage is safe, following a Hong Kong Consumer Council report last week that found carcinogens in the handles of some models, which caused its shares to dive 16 per cent.
But stock market operator Hong Kong Exchanges and Clearing Ltd. fell 2.8 per cent as investors worried a $2.2-billion bid announced last week for the London Metal Exchange was too high.
Benchmark oil for July delivery was up 91 cents to $84.94 per barrel in electronic trading on the New York Mercantile Exchange. The contract rose 12 cents to end at $84.03 a barrel in New York on Friday.