Source: DTN News - - This article compiled by Roger Smith from reliable sources Boeing(NSI News Source Info) TORONTO, Canada - April 11, 2012: Boeing (NYSE: BA) will bring the 787 Dreamliner to seven more cities on the sixth leg of the Dream Tour later this month and continuing into May. Stops include cities in the U.K., Norway, Italy and the U.S. 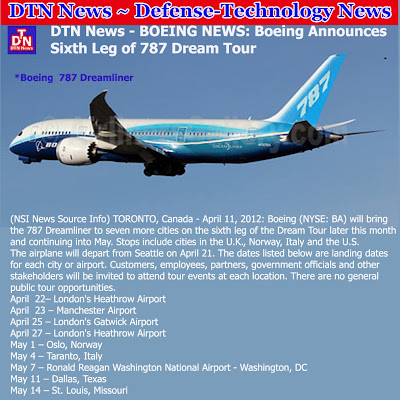 "The Dream Tour has provided us with a great platform to show customers, partners, government officials and other stakeholders just what the team has achieved with the 787," said Larry Loftis, vice president and general manager of the 787 program. "It's an honor to showcase this airplane as we bring it around the world."
The airplane will depart from Seattle on April 21. The dates listed below are landing dates for each city or airport. Customers, employees, partners, government officials and other stakeholders will be invited to attend tour events at each location. There are no general public tour opportunities.
More than 44,500 guests from around the world will have toured the airplane at the end of the fifth segment of the tour later this week and the airplane will have logged more than 82,366 nautical miles (152,542 km). The sixth segment will add an estimated 12,750 more guests and an additional 15,500 nmi (28,702 km).
The Dream Tour airplane, ZA003, is outfitted with the 787's special cabin features including a welcoming entryway, dramatically larger dimmable windows, bigger bins and dynamic LED lighting. The airplane is configured with a luxurious business-class cabin, an overhead crew rest compartment and an economy class section.
Dates and locations for additional tour stops will be announced approximately one month in advance. At many of the stops, local media will have the opportunity to participate in tours of the airplane and discussions with Boeing executives and pilots.
For updates on the 787 Dream Tour, including videos, photos and reports from the tour stops, visitwww.newairplane.com/787/dreamtour.
Contact:
Lori Gunter
787 Communications
+1 206 931 5919
*Link for This article compiled by Roger Smith from reliable sources Boeing*Speaking Image - Creation of DTN News ~ Defense Technology News *This article is being posted from Toronto, Canada By DTN News ~ Defense-Technology News Contact:dtnnews@ymail.com ©COPYRIGHT (C) DTN NEWS DEFENSE-TECHNOLOGY NEWS