Source: DTN News - - This article compiled by Roger Smith from reliable sources By Gunnery Sgt. Cindy Fisher, III MEF - Globalsecurity
(NSI News Source Info) CHIANG MAI, Kingdom of Thailand - February 15, 2011: The opening ceremony for Exercise Cobra Gold 2011 in Chiang Mai Feb. 7, 2011 highlighted the multinational nature of the exercise as well as the many benefits that occur when partner nations train together and look for effective solutions to common challenges. 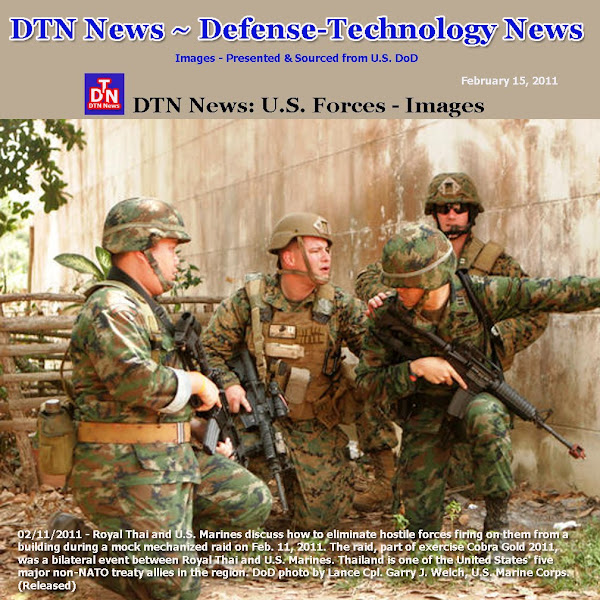 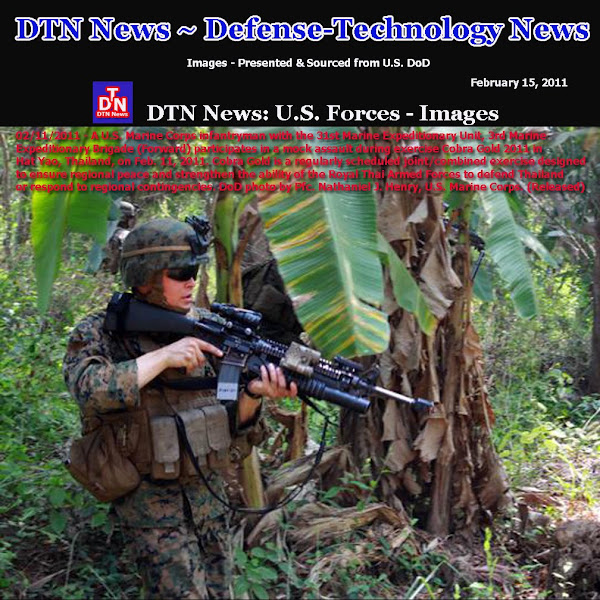 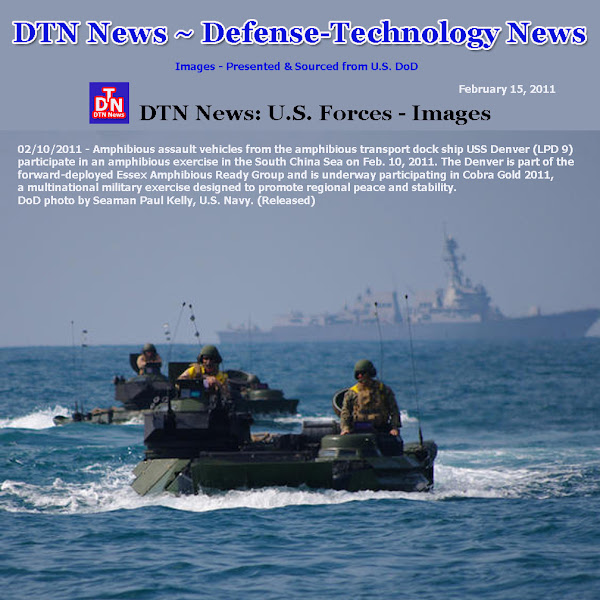 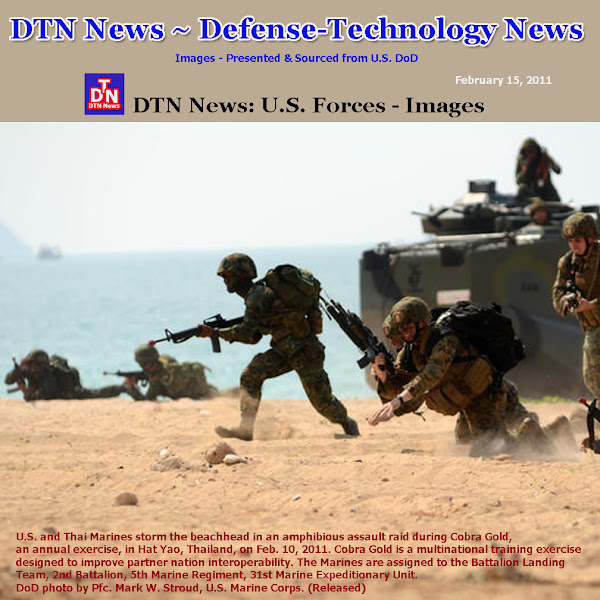 This is the first year Malaysian troops will join the armed forces of Thailand, Republic of Singapore, Japan, Republic of Indonesia, Republic of Korea and the U.S. for this exercise, the largest multinational exercise in the world, said Judith B. Cefkin, the U.S. deputy chief of mission, U.S. Embassy Bangkok, Thailand, during her remarks at the ceremony. “This is a significant event. Cobra Gold is truly an international exercise,” said Thai Lt. Gen. Surapun Wongthai, exercise director, during his opening remarks.

This year’s exercise has brought 24 nations together, Wongthai added. In addition to the participating nations, observing nations include the State of Brunei, People’s Republic of China, Republic of India, Lao Peoples’ Democratic Republic, Kingdom of the Netherlands, New Zealand, Russian Federation and Republic of South Africa.

Nearly 13,000 military personnel, about 7,300 of them American troops, will participate this year.

Glueck attributed the success of past multinational humanitarian efforts such as the response to the Dec. 26, 2004, tsunami in the Indian Ocean to lessons learned during Cobra Gold exercises.

In less than four days, a coalition task force headquarters was being established “in Utapao to direct the regional response to this crisis. This could only be accomplished through the results of previous Cobra Gold exercises and the relationships established,” he said.

Over the years, Cobra Gold has grown from the partnership between the United States and Thailand and expanded to include other nations in the region, said Cefkin.

Thailand and the U.S. have a history of cooperation.

The signing of the Treaty of Amity and Commerce March 20, 1833, formalized the two countries’ relationship and makes Thailand the U.S.’s oldest ally in Asia. Thailand is one of five major non-NATO treaty allies the U.S. has in the region.

For the first time, the staff exercise will have a single headquarters element, thereby ensuring participating nations are equal partners throughout the staff exercise’s future operations planning, said Cefkin.

Field training exercise events will include a multination amphibious assault Feb. 10, 2011, in which Thai, Korean and U.S. will participate. Live-fire exercises and other training events are also scheduled to take place.

There are 17 humanitarian assistance projects, eight engineering projects and nine medical visits scheduled for remote locations throughout Thailand, which will improve the quality if life in these areas, Cefkin said. These visits also allow troops to hone military skills needed for future humanitarian assistance deployments, she said.

The first of the engineering projects began Jan. 17, 2011, at Pa Ka Mai School in Tak province where U.S. Navy Seabees and Thai Army engineers are building a new school building. The building is scheduled to be completed Feb. 20, 2011.

“Cobra Gold 11 is far more than an exercise; it is truly a dress rehearsal for future responses,” Glueck said.

Source: DTN News - - This article compiled by Roger Smith from reliable sources By NEIL MacFARQUHAR and ALAN COWELL Published: February 15, 2011 - The New York Times
(NSI News Source Info) TORONTO, Canada - February 15, 2011: Hundreds of riot police officers in Iran beat protesters and fired tear gas Monday to contain the most significant street protests since the end of the 2009 uprising there, as security forces around the region moved — sometimes brutally — to prevent new unrest in sympathy with the opposition victory in Egypt. 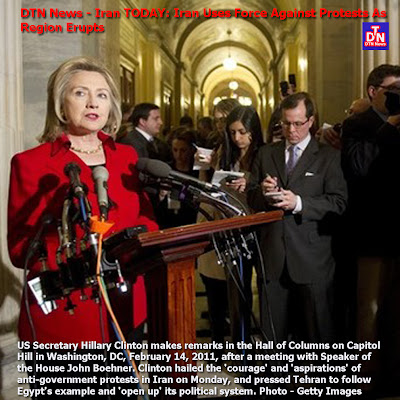 In Tehran, a spokesman for Mir Hussein Moussavi, a leading opponent of the government, said the protests had shown that the so-called Green Movement, formed to challenge the disputed election in 2009, had scored a “great victory“ and was “alive and well“ despite a huge government crackdown

But, breaking an official silence on the demonstrations, the Fars news agency, a semiofficial service linked to the powerful Revolutionary Guard Corps, said the demonstrations had been conducted by “hypocrites, monarchists, hooligans and seditionists“ whose leaders were puppets of Britain and the United States. It ridiculed them for not chanting slogans about Egypt, the nominal reason for the protests, and said an unspecified number of people had been arrested.

Iranian human rights activists and police said on person was killed and several injured in protests that continued until close to midnight. The authorities had refused to issue a permit for the demonstration but Amir Arjomand, the spokesman for Mr. Moussavi said: “If the government had issued a permit and guaranteed the safety of the people there would certainly have been millions of people out in Tehran and other cities.“

The size of the protests in Iran was unclear. Witness accounts and news reports from inside the country suggested that perhaps 20,000 to 30,000 demonstrators in several cities defied strong warnings and took to the streets.

The unrest was an acute embarrassment for Iranian leaders, who had sought to portray the toppling of two secular rulers, Zine el-Abidine Ben Ali in Tunisia and Hosni Mubarak in Egypt, as a triumph of popular support for Islam in the Arab world. They had refused permission to Iranian opposition groups seeking to march in solidarity with the Egyptians, and warned journalists and photographers based in the country, with success, not to report on the protests.

The Iranian authorities have shown that they will not hesitate to crush demonstrations with deadly force. Other governments across the Middle East and the Persian Gulf also moved aggressively to stamp out protests on Monday.

In Egypt, the army stuck to its promise not to attack demonstrators, but the death toll during the protests leading to Mr. Mubarak’s downfall reached about 300 people, according to the United Nations and human rights organizations. Most fatalities appeared to have occurred when pro-government thugs attacked demonstrators.

On Monday, the police in Bahrain fired rubber bullets and tear gas into crowds of peaceful protesters from the Shiite majority population. So much tear gas was fired that the officers themselves vomited. In Yemen, hundreds of student protesters clashed with pro-government forces in the fourth straight day of protests.

In the central Iranian city of Isfahan, many demonstrators were arrested after security forces clashed with them, reports said, and sporadic messages from inside Iran indicated that there had also been protests in Shiraz, Mashhad and Rasht.

Numbers were hard to assess, given government threats against journalists who tried to cover the protests. Aliakbar Mousavi Khoeini, a former member of Parliament now living in exile in the United States, said that 20,000 to 30,000 people had taken part across the country.

Ayatollah Khamenei and the Iranian establishment have tried to depict the Arab movements as a long-awaited echo of the 1979 Islamic Revolution, though Islamist parties had a low profile in both the Egyptian and Tunisian uprisings. The Iranian opposition has painted the Arab protests as an echo of its own anti-government movement in 2009, when citizens demanded basic rights like freedom of assembly and freedom of speech after the disputed re-election of President Mahmoud Ahmadinejad.

Mehdi Karroubi, an opposition leader, said in an interview last week that the opposition had decided to organize a day of demonstrations to underscore the double standard of the government in lauding protesters in Arab countries while suppressing those at home. Mr. Karroubi has been put under house arrest, with outside communication links severed, opposition reports said, as has Mir Hussein Moussavi, the other main opposition leader.

“We will frame our future tactics in light of what happened today,“ Mr. Arjomand said.

The Fars news agency, a semiofficial service linked to the Islamic Revolutionary Guards Corps, indirectly confirmed the protests by saying an unspecified number of demonstrators had been arrested. It called participants “hypocrites, monarchists, ruffians and seditionists“ and ridiculed them for not chanting slogans about Egypt, the nominal reason for the protests.

The authorities’ tactics on Monday indicated that they were resolved to stifle unrest — starting with the refusal to issue a permit for a nationwide demonstration. Reports that did emerge suggested that security forces had tried to prevent people from gathering by blocking the access routes to main squares in major cities and closing train stations in Tehran. 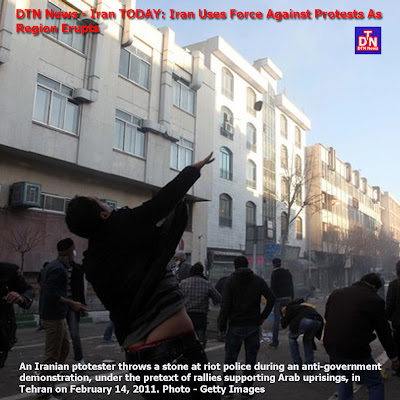 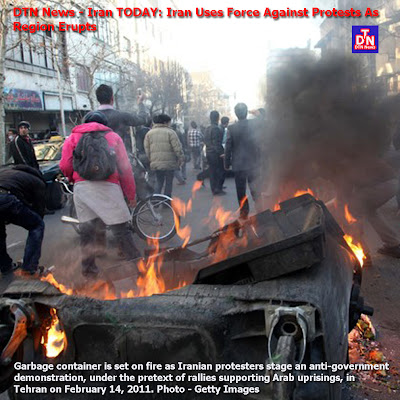 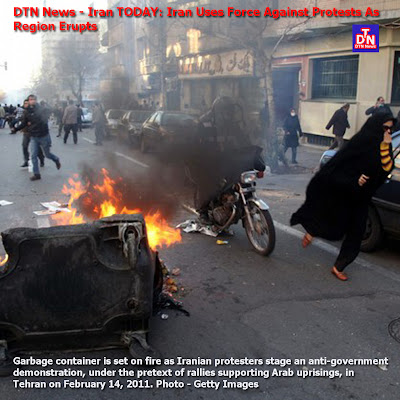 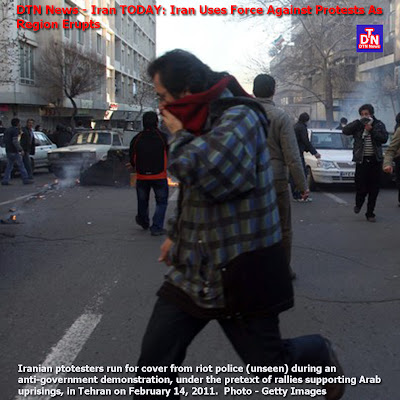 The crackdown came as the protests flared in Yemen and Bahrain. While those outbreaks were reported in some official Iranian state news media, which had also covered the 18-day Egyptian uprising selectively, there was no immediate mention of the clashes in Tehran and elsewhere on such state broadcasters as the English-language Press TV in Tehran.

On Tuesday, The Associated Press reported, thousands of mourners in Bahrain braved police tear gas to take part in a funeral procession for a man killed in protests on Monday.

Reports from inside Iran on Monday were harvested from a special Facebook page set up for the day called 25 Bahman, Twitter feeds, telephone calls and opposition Web sites.

They indicated that one tactic for sympathizers hoping to avoid a beating at the hands of the police was to drive to the demonstrations, with huge traffic jams reported in Tehran. Security forces on motorcycles tried to run down protesters, witnesses said.

Callers to the BBC Persian service television program called “Your Turn“ said demonstrators had tried to gather in small knots until the police turned up in force, at which point they would run into traffic to seek refuge with strangers who opened their car doors.

“It has not turned into a big demonstration mostly because they never managed to arrive at the main squares,“ said Pooneh Ghoddosi, the program’s host.

Cellular telephone service was shut off around the main squares and the Internet slowed to a crawl, activists said. Echoing tactics in Egypt and Tunisia, sympathizers outside Iran set up the 25 Bahman Facebook page — named for Monday’s date on the Iranian calendar — to collect videos, eyewitness accounts and any information.

Twitter feeds informed demonstrators to gather quickly at a certain intersection, then disperse rapidly. One video showed them burning a government poster as the chant against Ayatollah Khamenei rang out.

The Islamic government of Iran gradually stamped out the 2009 protests through the shooting of demonstrators, mass trials, torture, lengthy jail sentences and even executions of those taking part.

In Washington, Secretary of State Hillary Rodham Clinton said, “We wish the opposition and the brave people in the streets across cities in Iran the same opportunity that they saw their Egyptian counterparts seize in the last week.