The Taliban launched a series of coordinated deadly attacks Saturday in the southern Afghan city of Kandahar. At least two people were killed and 20 others were wounded in the fighting. 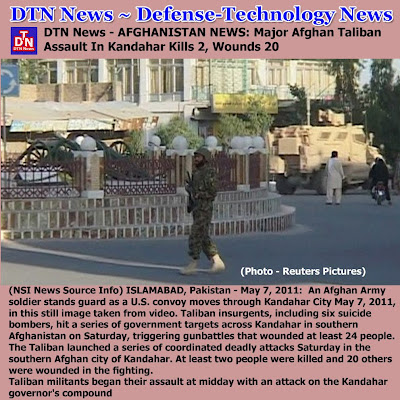 The militants used small arms fire, rocket propelled grenades, and suicide bombers and struck at locations throughout the city.

The attacks caused widespread panic across the city.

Kandahar shopkeeper Ali Khan says when heavy fighting and explosions broke out he and other shopkeepers closed their shops to prevent any looting.

Last week the Taliban announced it was launching the start of its annual spring offensive, which sees an increased number of attacks.

Afghan President Hamid Karzai condemned the attack, saying the Taliban and al-Qaida were using the violence to hide their weakness following Osama bin Laden's death at the hands of U.S. special forces in Pakistan.

The attacks in Kandahar city followed a Taliban statement on Friday, saying the killing of bin Laden would give a boost to the insurgency. However a Taliban spokesman said Saturday's assault was not a revenge attack.

DTNAfghanistan DTN Afghanistan
DTN Afghanistan: Hidden Stories from Women of Afghanistan, By Zarghuna Kargar: In recent years, the lot of many ...http://bit.ly/ixrN4J
50 minutes ago

DTNAfghanistan DTN Afghanistan
DTN Afghanistan: Impact of OBL's death on the Taliban: The husband of a 9/11 victim and a former Department of J...http://bit.ly/kdsGX8
50 minutes ago