Dynetics, Incorporated, of Huntsville, Ala., Georgia Tech Applied Research Institute of Atlanta, Ga. and MilTec Corporation of Huntsville, Ala. are being awarded a $45,000,000 indefinite delivery/indefinite quantity contract for firm, fixed priced hardware, software, and design, and a cost reimbursable line item for travel and a Not Separately Priced Line item for data. This effort provides C4I & munitions test improvement. Location of performance is Dynetics, Inc., Hunstville, Ala; Georgia Tech Applied Research Institute, Atlanta, Ga. and MilTec Corporation, Huntsville, Ala. The contracting activity is AAC/PKE, Elgin Air Force Base, Fla. (FA9201-11-D-0095, FA9201-11-D-0096 and FA9201-11-D-0097)

Air BP division of BP Products North America Inc., Naperville, Ill. was awarded an unusual and compelling contract SP0600-10-R-0061-0003. Award is a fixed price with economic price adjustment, indefinite delivery and indefinite quantity, one and a half month contract with a maximum $42,313,420 for fuel. Other locations of performance include Texas, Louisiana and Mississippi. Using service is Defense Logistics Agency Energy. The date of performance completion is June 30, 2011. The contracting activity is the Defense Logistics Agency Energy, Fort Belvoir, Va.

Source: DTN News - - K. V. Seth
(NSI News Source Info) TORONTO, Canada - April 14, 2011:
We Wish All our Readers and Viewers a Happy Vaisakhi - Whatever you’re doing to celebrate this Punjabi harvest festival and Baisakhi Sikh festival, we hope you enjoy the occasion to the full. 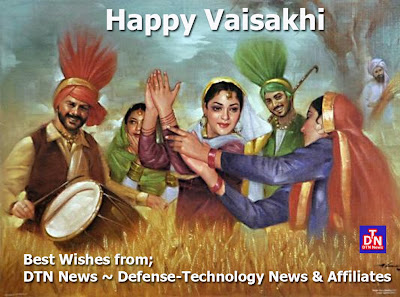 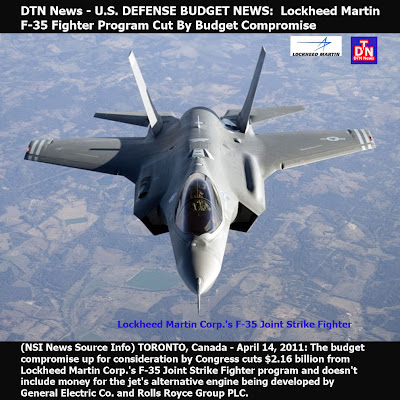 The White House and congressional leaders agreed to a $670.8 billion Defense Department appropriations bill for 2011 that is $18.1 billion below the Pentagon's original request for the fiscal year that ends Sept. 30. The base budget proposed for the Pentagon is $513 billion while funds for the wars in Iraq and Afghanistan remain at $157.8 billion, the amount requested by the Obama administration, according to budget details released by the Senate.

The House and Senate are expected to vote on the bill by Friday, part of the plan to avert a government shutdown when the current stopgap funding measure is set to expire. The numbers released Tuesday don't include military construction projects, which are approved by Congress in a separate bill.

The bill proposes a cut of $2.16 billion from the F-35 program because of production and aircraft testing delays, according to the document. The $382 billion program to build variations of the aircraft for the Air Force, Navy and Marine Corps is under scrutiny because of rising costs and schedule slips, including technical hurdles in developing the Marine Corps' short-takeoff and vertical-landing version.

The measure also doesn't fund the GE/Rolls Royce engine for the F-35. The primary engine for the fighter jet is built by Pratt & Whitney, a unit of United Technologies Corp.

The proposed bill cuts a total of $9 billion across all operations and maintenance accounts. It also cuts $500 million from the Obama administration's request of $2 billion for Iraqi security forces funds. 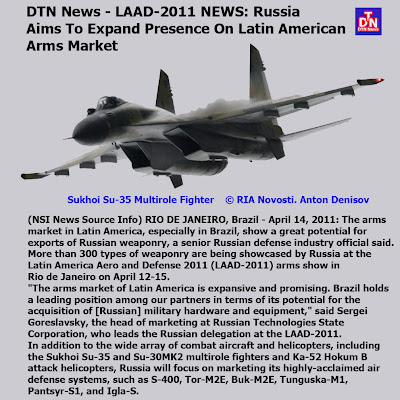 More than 300 types of weaponry are being showcased by Russia at the Latin America Aero and Defense 2011 (LAAD-2011) arms show in Rio de Janeiro on April 12-15.

"The arms market of Latin America is expansive and promising. Brazil holds a leading position among our partners in terms of its potential for the acquisition of [Russian] military hardware and equipment," said Sergei Goreslavsky, the head of marketing at Russian Technologies State Corporation, who leads the Russian delegation at the LAAD-2011.

In addition to the wide array of combat aircraft and helicopters, including the Sukhoi Su-35 and Su-30MK2 multirole fighters and Ka-52 Hokum B attack helicopters, Russia will focus on marketing its highly-acclaimed air defense systems, such as S-400, Tor-M2E, Buk-M2E, Tunguska-M1, Pantsyr-S1, and Igla-S.

"Modern warfare, as the recent events in Northern Africa confirmed, is conducted mainly from the air," Goreslavsky said. "That's why the purchase of advanced air defense systems offered by Russia becomes a serious consideration."

"We are hoping to gain some ground in this direction," the official added.

Russia, the world's second largest arms exporter after the United States, sold $8.6 billion worth of weaponry last year and is looking to increase its arms sales to almost $10 bln in 2011.

Six jets - two F-16s, two Mirage 2000-5s and two Taiwan-built Indigenous Defence Fighters - landed on a motorway near Tainan(台南) city, where they refuelled and loaded with missiles and other ammunition before taking off again.

The exercise is part of a series of war games stretching over a five-day period and codenamed 'Han Kuang(漢光) 27', or 'Han Glory 27', which involved more than 1,300 soldiers.

The ROC military held an emergency landing and takeoff drill on a stretch of Freeway No. 1 near Madou District in Tainan City in the early morning of April 12 as part of the annual Hankuang exercises. 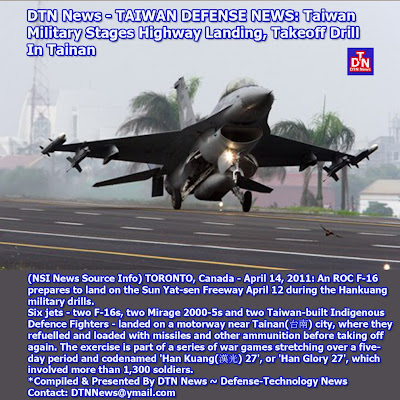 The drill simulated a wartime situation in which runways at airbases in southern Taiwan are destroyed by mainland Chinese guided missile attacks, according to the Ministry of National Defense. “In such an event, sections of highways that have been designed to accommodate military aircraft need to be employed,” said the MND.

This marked the first time that the air force and army’s airborne and special operations unit have jointly taken part in such an exercise.

It was also the third landing and takeoff drill staged on Sun Yat-sen Freeway since it opened to traffic in the 1970s, following similar exercises in 2004 on a highway section near Rende District in Tainan and in 2007 on a stretch near Huatan Township in the western county of Changhua.

On April 11, the military held an anti-landing drill, also part of the ongoing Hankuang exercises, at the mouth of the Danshui River in New Taipei City, located about 10 kilometers from capital Taipei City. (SB)

The Taiwanese military have landed various craft on a motorway in an exercise simulating an attack on the country's airfields.

Various sections of the island's motorways are designed to be used as runways at short notice.

Air Force Colonel Li Wen-yu said preparation was as vital as the exercise itself, with dozens of soldiers cleaning debris off the highway before any craft could land on it.