Source: DTN News - - This article compiled by Roger Smith from reliable sources By Ong Hong Tat - Ministry of Defence Singapore
(NSI News Source Info) SINGAPORE - February 17, 2011: Since 10 Feb, some 500 personnel from the Army and the Royal Brunei Land Forces (RBLF) have been training together as part of the annual bilateral exercise, codenamed Maju Bersama. 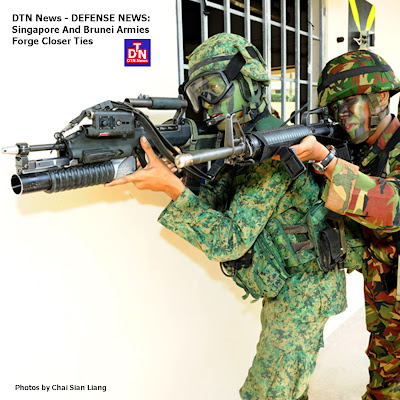 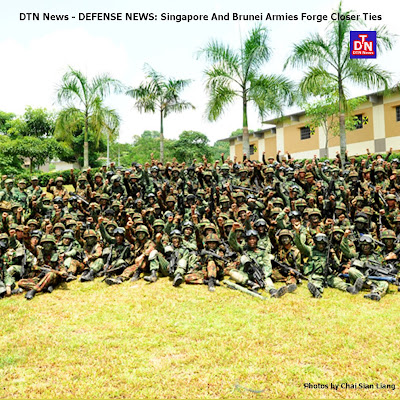 "We are here to share our drills with the RBLF soldiers and learn from each other," said Lieutenant (LTA) Mohd Najibullah, a Platoon Commander from 1 SIR.

Soldiers from both sides started off with group, section and platoon-level drills, culminating in a concurrent company-level assault on various objectives within the MUTF.

During the exercise, the camaraderie among soldiers from the two armies was clearly evident. "Many of my fellow RBLF officers have ties with Singapore, having attended Officer Cadet School (OCS) here." said Major (MAJ) Mohd Suwardi, Officer Commanding of Delta Company, 2nd Battalion RBLF.

MAJ Suwardi himself attended OCS in 1998, and was commissioned as an officer in Singapore. "Initially, we struggled to communicate with each other but we worked around it by getting soldiers who speak both English and Malay to relay our messages to one another," said LTA Najibullah. "Within the first few hours, we were understanding each other well." Moving in teams of about six, soldiers from 1 SIR carried out their tactical urban operations drills, observed by the RBLF troops. "The Singapore Army certainly possesses a high level of proficiency in UO. I would say that both sides have benefited a lot from the exercise," commented MAJ Suwardi. Similarly, soldiers from 1 SIR were impressed with the RBLF's expertise in the conduct of jungle warfare. "They showed us some of their survival skills such as setting up animal traps. I can tell that they are really professional and experienced [in jungle survival]," said Private Muhammad Irsyad, a trooper from 1 SIR. In addition to the urban operations drills conducted at the MUTF, the eight-day exercise, which concluded today, included brigade-level planning and a combined live-firing exercise. First conducted in 1995, Exercise Maju Bersama underscores the close and long-standing defence ties between Singapore and Brunei. Both armies engage in regular bilateral exercises, visits and professional exchanges, which have fostered mutual understanding and enhanced interoperability between the two armies. 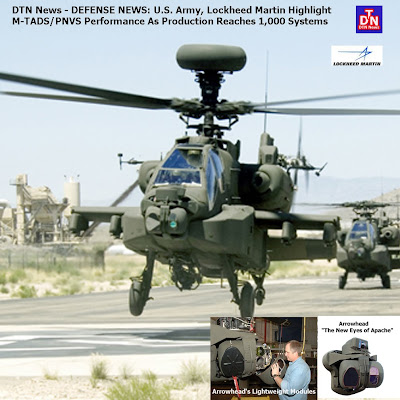 “The M-TADS/PNVS is a game-changer on the battlefield and has ensured Longbow Apaches remain dominant in support of our ground soldiers,” said Col. Shane Openshaw, U.S. Army project manager for Apache Attack Helicopter. “This combat-tested system has shown, through over five years of continuous combat operations since the first unit was fielded, that an Apache equipped with M-TADS/PNVS is the most lethal and survivable attack helicopter in the world.”

M-TADS/PNVS provides Apache pilots with the most advanced long-range, electro-optical precision engagement and pilotage capabilities to ensure mission success and flight safety in day, night and adverse weather missions. It employs state-of-the-art forward-looking infrared sensors to provide Apache pilots with enhanced image resolution, giving them the complementary benefits of significant standoff range and unrivaled targeting capabilities. M-TADS/PNVS improves performance and reliability over legacy TADS/PNVS systems by more than 150 percent, reduces maintenance actions by nearly 60 percent, and will save the U.S. Army nearly $1 billion in operation and support costs over its 20-year system life.

“Teamwork has been the secret to the success of this program,” said David Belvin, director of Apache programs at Lockheed Martin Missiles and Fire Control. “The U.S. Army, Lockheed Martin and its suppliers worked together as a team to achieve an unprecedented rapid development and production program to support the warfighter.”

“U.S. Apaches are nearly completely equipped with this incredible system, and we will have retrofitted all of our Longbows in the field by the summer of 2011,” added Col. Openshaw. “In addition, many allied force Apaches around the world are M-TADS/PNVS-equipped, greatly enhancing their capability to conduct attack operations and to integrate with U.S. and NATO forces. This production milestone, the delivery of M-TADS/PNVS number 1,000, is another tremendous achievement for this outstanding program.”

The U.S. Army awarded Lockheed Martin the original M-TADS/PNVS contract in 2003. The first system was delivered to a U.S. Army Apache in theater in 2005. Previous milestones include the 250th system delivery in 2007 and the 500th delivery in 2008. During this period, M-TADS/PNVS was delivered at a rate of over 20 units per month. The 1,000th delivery ceremony signifies another important step in Lockheed Martin’s support of Army Aviation. Additional domestic and international deliveries will continue through 2014. Electronics assembly of M-TADS/PNVS is performed at the Lockheed Martin facility in Ocala, FL. Final assembly is performed at Lockheed Martin’s facility in Orlando, FL. 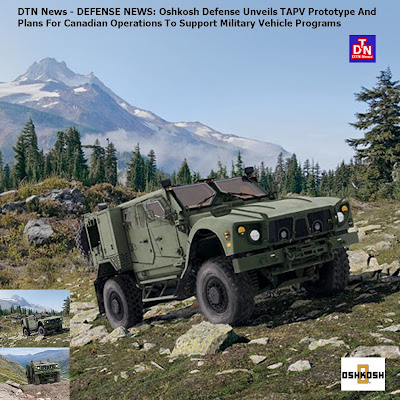 “Our team has thoughtfully reviewed draft RFPs for the TAPV and MSVS programs, and we are aligning our operations to DND requirements for highly-protected vehicles and long-term maintenance and support for the vehicles,” said Andy Hove, Oshkosh Corporation executive vice president and president, Oshkosh Defense. “Our plans will deliver significant value to DND by leveraging proven technology and support capabilities while providing industrial and regional benefits to contribute to the Canadian economy.”

LMI, an Oshkosh Corporation subsidiary, is set to provide in-country manufacturing capabilities for both the TAPV and MSVS programs. The 140,000 square-foot LMI facility applies the latest manufacturing methods and quality processes to produce concrete mixer trucks for customers throughout North and South America. The LMI operation was designed with capacity for future programs and fosters an experienced workforce to support the TAPV and MSVS programs as well as a broad range of commercial and specialty vehicle programs.

Oshkosh Defense and General Dynamics Land Systems-Canada teamed for the TAPV program, which will replace the Armoured Patrol Vehicle (APV) and the Coyote reconnaissance vehicle. The companies also are teamed up for the MSVS program, which will replace the Medium Logistics Vehicles, Wheeled (MLVW) fleet. The new programs will enhance the capabilities of the Canadian Forces with protected, high-performance vehicle fleets.

Oshkosh will serve as the prime contractor for both programs and will leverage proven vehicle platforms and advanced technologies for proposal submissions, including the MRAP All-Terrain Vehicle (M-ATV) and the Medium Tactical Vehicle Replacement (MTVR). Oshkosh Defense uses the services of Valley Associates to provide Canadian-based marketing and business development.

“From the start of our collaboration, the Oshkosh-General Dynamics Land Systems-Canada team has been dedicated to creating good jobs and lasting value to the Canadian economy,” Hove said. “We are continuing to demonstrate that dedication through investment commitments in London Machinery.”

The production work provided by LMI is in addition to the previously announced work scope being performed by General Dynamics Land Systems-Canada. On March 22, 2010, the team announced that General Dynamics will provide remote weapons system (RWS), command, control, communications, computers, intelligence, surveillance and reconnaissance (C4ISR) integration and testing support for the vehicle as well as extensive logistics, training and technical manuals.

Oshkosh Defense, a division of Oshkosh Corporation, is an industry-leading global designer and manufacturer of tactical military trucks and armored wheeled vehicles, delivering a full product line of conventional and hybrid vehicles, advanced armor options, proprietary suspensions and vehicles with payloads that can exceed 70 tons. Oshkosh Defense provides a global service and supply network including full life-cycle support and remanufacturing, and its vehicles are recognized the world over for superior performance, reliability and protection. For more information, visit www.oshkoshdefense.com.

This press release contains statements that the Company believes to be “forward-looking statements” within the meaning of the Private Securities Litigation Reform Act of 1995. All statements other than statements of historical fact, including, without limitation, statements regarding the Company’s future financial position, business strategy, targets, projected sales, costs, earnings, capital expenditures, debt levels and cash flows, and plans and objectives of management for future operations, are forward-looking statements. When used in this press release, words such as “may,” “will,” “expect,” “intend,” “estimate,” “anticipate,” “believe,” “should,” “project” or “plan” or the negative thereof or variations thereon or similar terminology are generally intended to identify forward-looking statements. These forward-looking statements are not guarantees of future performance and are subject to risks, uncertainties, assumptions and other factors, some of which are beyond the Company’s control, which could cause actual results to differ materially from those expressed or implied by such forward-looking statements. These factors include the impact on revenues and margins of the decrease in M-ATV production rates; the cyclical nature of the Company’s access equipment, commercial and fire & emergency markets, especially during periods of global economic weakness and tight credit markets; the Company’s ability to produce vehicles under the FMTV contract at targeted margins; the duration of the ongoing global economic weakness, which could lead to additional impairment charges related to many of the Company’s intangible assets and/or a slower recovery in the Company’s cyclical businesses than equity market expectations; the expected level and timing of U.S. Department of Defense (DoD) procurement of products and services and funding thereof, especially in an environment when the U.S. government is operating under a Continuing Resolution budget action; risks related to reductions in government expenditures in light of U.S. defense budget pressures and an uncertain DoD tactical wheeled vehicle strategy; the potential for the U.S. government to competitively bid the Company’s Army and Marine Corps contracts; the consequences of financial leverage, which could limit the Company’s ability to pursue various opportunities; the potential for commodity and other raw material costs to rise sharply, particularly in a future economic recovery; risks related to costs and charges as a result of facilities consolidation and alignment, including that anticipated cost savings may not be achieved; risks related to the collectability of receivables, particularly for those businesses with exposure to construction markets; the cost of any warranty campaigns related to the Company’s products; risks related to production delays arising from supplier quality or production issues; risks associated with international operations and sales, including foreign currency fluctuations and compliance with the Foreign Corrupt Practices Act; risks related to work stoppages and other labor matters; the potential for disruptions or cost overruns in the Company’s global enterprise system implementation; the potential for increased costs relating to compliance with changes in laws and regulations; and risks related to disruptions in the Company’s distribution networks. Additional information concerning these and other factors is contained in the Company’s filings with the Securities and Exchange Commission. All forward-looking statements speak only as of the date of this press release. The Company assumes no obligation, and disclaims any obligation, to update information contained in this press release. Investors should be aware that the Company may not update such information until the Company’s next quarterly earnings conference call, if at all.