Electric Boat Corp., Groton, Conn., is being awarded a $23,068,954 cost-plus-fixed-fee order under previously awarded basic ordering agreement (N00024-10-G-4304) to support submarine repair work at Norfolk Naval Shipyard during ongoing availabilities. This contract is for uniquely skilled tradesmen support to two chief of naval operations submarine maintenance availabilities scheduled. Ships scheduled to undergo repairs include USS Newport News (SSN 750) and USS West Virginia (SSBN 736). Work will be performed in Norfolk, Va., and is scheduled to be completed by September 2012. Contract funds in the amount of $23,068,954 will expire at the end of the current fiscal year. The Supervisor of Shipbuilding, Conversion and Repair, Groton, Conn., is the contracting activity. 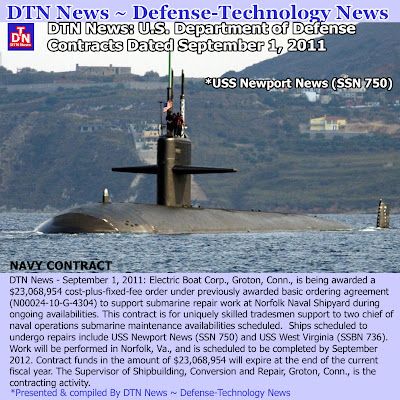 Bulltrack-Watts, (joint venture)*, Marysville, Calif., is being awarded for $16,875,681firm-fixed-price task order #0004 under a previously awarded multiple award construction contract (N40192-10-D-2801) for construction of a new combined support maintenance shop at the Guam Army National Guard Barrigada Complex. The work to be performed provides for construction of a pre-engineered metal building with cast tilt-up concrete panels and masonry block interior partitions. The building will consist of a specially designed maintenance facility, maintenance work bays, plus administrative, personnel, and work areas. Work will be performed in Barrigada, Guam, and is expected to be completed by April 2013. Contract funds will not expire at the end of the current fiscal year. Six proposals were received for this task order. The Naval Facilities Engineering Command, Marianas, Guam, is the contracting activity.

Northrop Grumman Systems Corporation, McLean, Va., is being awarded an $8,322,248 indefinite-delivery/indefinite-quantity contract, with cost-plus-fixed-fee and firm-fixed-price provisions, for the deployment, enhancement, and operation and maintenance services in support of the Naval Criminal Investigative Service Law Enforcement Information Exchange System. This contract contains three, one-year options, which if exercised, will bring the contract value to $32,956,961. Work will be performed in McLean, Va. and at other locations to be determined, and work is expected to be completed Sept. 30, 2012. Contract funds will not expire at the end of the current fiscal year. Funding will be obligated at the individual task order level. This contract was competitively procured via Navy Electronic Commerce Online website, with two offers received. The NAVSUP Fleet Logistics Support Center Norfolk Contracting Department, Philadelphia Office, is the contracting activity (N00189-11-D-Z041).

Exhibit Arts, LLC, of Wichita, Kan., is being awarded a $14,156,544.71 firm-fixed price contract for Marketing, Advertising, and Fulfillment Services in support of the Employer Support of the Guard and Reserve and Yellow Ribbon Program. Work will be performed at Wichita, Kansas, and is expected to be completed in April 2014. Contract funds will expire at the end of the current fiscal year. This requirement was solicited on the Federal Business Opportunities website under full and open competition. Nine bids were received. The contracting activity is the Defense Human Resources Activity (DHRA) Procurement Support Office (PSO), Alexandria, Virginia. The contract number for this requirement is: H98210-11-C-0033. 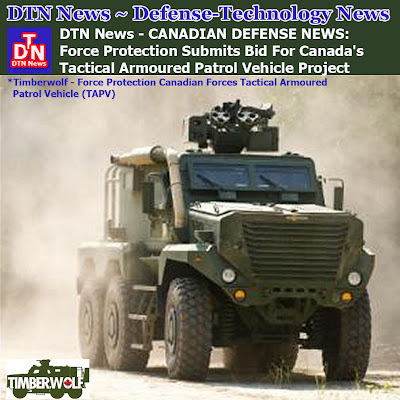 Force Protection is offering the Canadian Forces a 6x6 variant of the battle proven Cougar wheeled combat vehicle developed by Force Protection to meet the TAPV requirements. Force Protection will be the design authority and have overall responsibility for the acquisition contract to supply the TAPV vehicles and maintain configuration control.
As Force Protection's main Canadian partner, CAE will have overall responsibility for the comprehensive in-service support (ISS) solution, including: vehicle operator and mission training systems; engineering information environment; fleet management services; systems engineering support; and, lifecycle and integrated logistics support services. CAE will also be responsible for assembling a pan-Canadian team of companies to develop and support any country-specific requirements for Canada's replacement fleet of tactical armored patrol vehicles.
Force Protection and CAE previously announced a collaboration that includes Elbit Systems as the provider for a dual remote weapons system (DRWS) and Lockheed Martin Canada as the provider of C4ISR suite for the Timberwolf vehicle. Elbit Systems' Land and C4I DRWS was chosen based on its superior performance, reliability and ease of integration. Lockheed Martin Canada was chosen as the C4ISR integrator for Timberwolf based on its recognized capability in the development, production and support for integrated C4 systems.
Randy Hutcherson, Chief of Business Development for Force Protection, said, "Partnered with CAE, Force Protection is pleased to formally submit Timberwolf as the optimal solution for the TAPV project. Along with our key providers, we are committed to offering the Canadian Forces a highly-protected and reliable vehicle, as well as Industrial and Regional Benefits that will contribute to investment in Canadian industry and provide further experience and capability in the armored vehicle market."
A contract award to the final selected bidder for the TAPV requirement is currently expected by the second quarter of 2012.
About Force Protection, Inc.
Force Protection, Inc. is a leading designer, developer and manufacturer of survivability solutions, including blast- and ballistic-protected wheeled vehicles currently deployed by the U.S. military and its allies to support armed forces and security personnel in conflict zones. The Company's specialty vehicles, including the Buffalo, Cougar, Ocelot and the related variants of each, are designed specifically for reconnaissance and other operations and protect their occupants from landmines, hostile fire, and improvised explosive devices (commonly referred to as roadside bombs). Complementing these efforts, the Company is designing, developing and marketing the JAMMA, a new vehicle platform that provides increased modularity, transportability, speed and mobility. The Company also develops, manufactures, tests, delivers and supports products and services aimed at further enhancing the survivability of users against additional threats. In addition, the Company provides long-term life cycle support services of its vehicles that involve development of technical data packages, supply of spares, field and depot maintenance activities, assignment of skilled field service representatives, and advanced driver and maintenance training programs. For more information on Force Protection and its products and services, visit www.forceprotection.net.
Force Protection's Safe Harbor Statement
This press release contains forward looking statements that are not historical facts, including statements about our beliefs and expectations. These statements are based on beliefs and assumptions of Force Protection's management, and on information currently available to management. These forward-looking statements include, among other things: the growth, demand and interest for Force Protection's services and products, including the Cougar and Timberwolf; expectations for future programs and the related timing of proposals and awards; the ability to meet current and future requirements; the ability to drive manufacturing and operational efficiencies; and, the Company's execution of its business strategy, including its development initiatives and opportunities to broaden its platform. Forward-looking statements speak only as of the date they are made, and the Company undertakes no obligation to update any of them publicly in light of new information or future events. A number of important factors could cause actual results to differ materially from those contained in any forward-looking statements. Examples of these factors include, but are not limited to, the ability to effectively manage the risks in the Company's business; the ability to win future awards and finalize contracts; and the other risk factors and cautionary statements listed in the Company's periodic reports filed with the Securities and Exchange Commission, including the risks set forth in the Company's Annual Report on Form 10-K for the year ended December 31, 2010 and Form 10-Q for the three and six months ended June 30, 2011.
*Link for This article compiled by Roger Smith from reliable sources Force Protection
*Speaking Image - Creation of DTN News ~ Defense Technology News
*This article is being posted from Toronto, Canada By DTN News ~ Defense-Technology News
Contact:
dtnnews@ymail.com 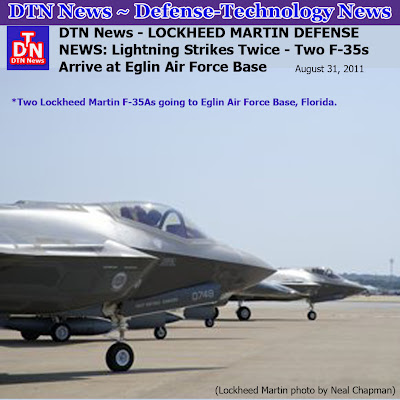 (NSI News Source Info) TORONTO, Canada - September 1, 2011: Two Lockheed Martin F-35As, AF-10 and AF-11, along with two F-16 chase aircraft, are poised for takeoff to Eglin Air Force Base, Fla., Wednesday morning. They officially arrived at the base at 1:19 p.m. CDT today.
On Friday, the F-35 Joint Program Office authorized a return to flight operations for F-35 production aircraft. AF-10 and AF-11 completed the 90-minute flight marking the ninth and tenth F-35 contractual deliveries of 2011.
The pair of conventional takeoff and landing (CTOL) jets will be used for training pilots and maintainers at the new F-35 Integrated Training Center there. 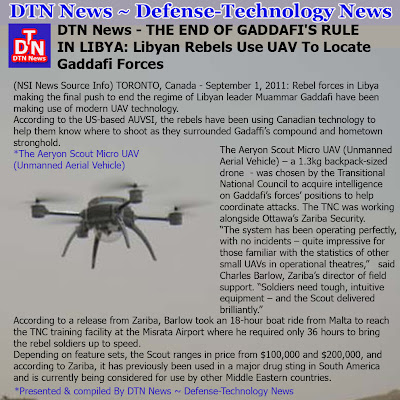 (NSI News Source Info) TORONTO, Canada - September 1, 2011: Rebel forces in Libya making the final push to end the regime of Libyan leader Muammar Gaddafi have been making use of modern UAV technology.
According to the US-based AUVSI, the rebels have been using Canadian technology to help them know where to shoot as they surrounded Gadaffi’s compound and hometown stronghold.
The Aeryon Scout Micro UAV (Unmanned Aerial Vehicle) – a 1.3kg backpack-sized drone - was chosen by the Transitional National Council to acquire intelligence on Gaddafi’s forces’ positions to help coordinate attacks. The TNC was working alongside Ottawa’s Zariba Security.
“The system has been operating perfectly, with no incidents – quite impressive for those familiar with the statistics of other small UAVs in operational theatres,” said Charles Barlow, Zariba’s director of field support. “Soldiers need tough, intuitive equipment – and the Scout delivered brilliantly.”
According to a release from Zariba, Barlow took an 18-hour boat ride from Malta to reach the TNC training facility at the Misrata Airport where he required only 36 hours to bring the rebel soldiers up to speed.
“After only one demonstration flight, the TNC soldiers operated the following flight,” he said.
“I was amazed how easy it was to train people with no previous UAV or aircraft experience, especially given the language barrier.
The Scout was designed specifically for desert operations, capable of operating in temperatures up to +50C and in sandy or wet conditions. Its vertical takeoff and landing capability, combined with both an optical camera for daytime use and a thermal imaging system for nighttime observation, makes the lightweight spy-copter particularly versatile.
Depending on feature sets, the Scout ranges in price from $100,000 and $200,000, and according to Zariba, it has previously been used in a major drug sting in South America and is currently being considered for use by other Middle Eastern countries.
*Link for This article compiled by Roger Smith from reliable sources
*Speaking Image - Creation of DTN News ~ Defense Technology News
*This article is being posted from Toronto, Canada By DTN News ~ Defense-Technology News
Contact:
dtnnews@ymail.com