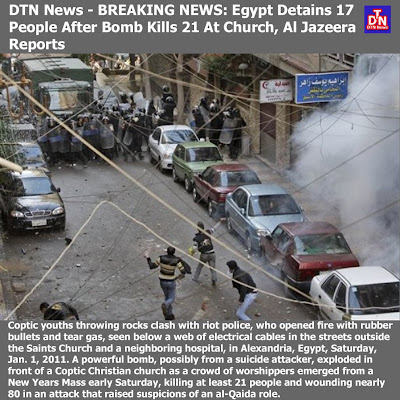 The blast, which occurred shortly after midnight yesterday, also injured more than 90 people, according to the Health Ministry. President Hosni Mubarak blamed the attack on “foreign elements” and called for unity among Muslims and Christians.

Tension between the two communities has been building over several years in the Muslim-dominated country. Scores of Christians protested in Alexandria after the attack, pelting police forces with stones, television footage showed.

The Interior Ministry said yesterday that it has beefed security up around churches nationwide “in light of the escalating threats from al-Qaeda to many countries,” according to a statement on its website.

Al-Qaeda’s branch in Iraq said in November it would attack Christian targets after it claimed Egypt’s Coptic Church was holding two Christian women who had converted to Islam. The church has denied this charge. No group has claimed responsibility for today’s blast.

The attack bears the “fingerprints” of al-Qaeda, said Amr El-Shobaki, an analyst at the Cairo-based Al Ahram Center for Political and Strategic Studies. “It was either successful in planting a cell in Egypt or recruited individuals to carry out a single operation,” he said.

“This will deepen the tension between Muslims and Christians in Egypt," El-Shobaki said in a telephone interview yesterday.

Analysts have previously said that they didn’t see signs of an organized presence in Egypt by Islamic extremist groups such as al Qaeda, whose top deputy leader, Ayman Al-Zawahiri, is Egyptian.

Police waged a war with Islamist militants, mainly in southern Egypt, during the 1990s. In 1997, militants killed more than 60 tourists in the ancient city of Luxor, sparking a security crackdown that brought attacks to a halt.

That respite ended with a series of bombings from 2004 to 2006 targeting resorts in the Sinai peninsula, killing more than 100 Egyptian and foreign tourists. The three attacks in Sinai, which police blamed on a previously unknown local group, occurred on the eve of national holidays. More than 20 people died in a 2006 bombing in the resort of Dahab, a year after more than 60 were killed in a similar incident in Sharm El-Sheikh.

The explosion in Alexandria was likely carried out by a suicide bomber who was also killed in the blast, the Interior Ministry said.

“It has been confirmed that the epicenter of the blast wasn’t in one of the cars or the road, which makes it likely that the device was carried by a suicide man who was killed with the rest,” the ministry said.

President Hosni Mubarak, in a televised speech, vowed to find those responsible for the attack. “We will cut off the hand of terrorism,” he said.

“You are making a grave mistake if you think that you will be spared the punishment of Egyptians,” Mubarak said, addressing the perpetrators.

The blast badly damaged other cars on the street, television footage showed.

Copts account for about 10 percent of Egypt’s population of 80 million people. The Coptic Orthodox Church was founded in Alexandria in the first century by Mark, one of the apostles of Jesus. After an Arab army conquered Egypt in the seventh century, Islam gradually became the country’s dominant religion.

In January 2010, six Christians were killed in a drive-by shooting outside a church in southern Egypt, and in November police killed a protester during clashes with Copts triggered by a halt to the construction of a church.

In 2004, Christians in Cairo claimed that the wife of a Coptic priest was forced to convert to Islam. After a riot in which 50 people were injured, the government ordered her returned to her Coptic family. In 2005, Muslims in Alexandria demonstrated over a DVD in which a Coptic youth converts to Islam and then changes his mind.

In late 2008, riots erupted in Ain Shams, a district of Cairo, after Copts renovated a former underwear factory and held mass there.

Egypt, set to hold a presidential election in September, relies on tourism as a key source for foreign currency along with foreign direct investment and revenue from the Suez Canal.

Tourism accounts for 13 percent of jobs in the Arab country. The government aims to attract 16 million tourists in 2011, bringing in $14 billion in revenue, Tourism Minister Zoheir Garranah said in an interview in October.

“If there is any negative impact on tourism it will be in the short-term,” Alia Mamdouh, an economist at Cairo-based investment bank CI Capital, said by telephone yesterday.

Egypt’s benchmark EGX30 stock index closed 0.9 percent higher on Dec. 30, taking its gains in 2010 to 15 percent, according to data compiled by Bloomberg.

To contact the reporter on this story: Alaa Shahine in Cairo at asalha@bloomberg.net.

To contact the editor responsible for this story: Louis Meixler, at lmeixler@bloomberg.net

*This article is being posted from Singapore/Toronto, Canada By DTN News ~ Defense-Technology News, contact: dtnnews@ymail.com 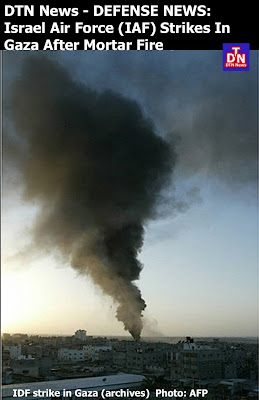