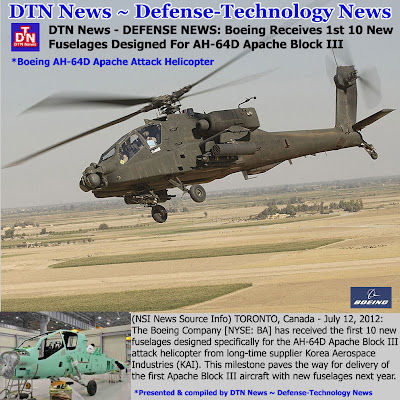 "KAI has been a key part of our ongoing effort to keep the Apache relevant and ahead of the competition," said Bill Elder, Boeing regional manager, Northeast Asia, Attack Helicopters Business Development. "The Apache's role has dramatically changed over the years, and it is vital for Boeing to give its customers the capabilities they need in a package that will perform for many years to come."
The new fuselage incorporates a variety of small but important modifications to accommodate Block III configuration changes, such as enhancements to the extended forward avionics bays and slots for new electronics.
Boeing will produce approximately 50 AH-64D Apache Block III helicopters for the U.S. Army under Low Rate Initial Production. The Army's acquisition objective stands at 690 Apache Block III aircraft. In addition, a growing number of defense forces worldwide have contracted for or are considering upgrading to or adding the Apache Block III to their rotorcraft fleets.
"KAI began producing fuselages for the world’s most advanced combat helicopter nearly a decade ago at its facility in Sacheon," said Pat Gaines, president of Boeing Korea. "Today more than 1,000 AH-64D Apaches are in service, in production or under contract with 12 customers worldwide. This is just one example of the mutual benefits created by expanding the global reach of opportunities available to Korean industry."
KAI supports a number of other Boeing military and commercial aircraft programs. The company manufactures F-15 forward fuselages and wings, and is a key supplier on the A-10 Wing Replacement Program. Additionally, the company is performing the extensive modifications necessary for the 737-based Peace Eye Airborne Early Warning & Control aircraft, and is a major supplier of Boeing Commercial Airplanes assemblies. KAI’s high-quality, on-time deliveries earned it a 2010 Boeing Supplier of the Year award.
Boeing has worked throughout the program with its customers to plan continual Apache upgrades. Most of the original AH-64A Apaches have been upgraded to the Apache Block II configuration. The Apache Block III incorporates 26 new technologies designed to enhance the aircraft’s power and performance, such as an improved drive system and new main rotor blade.
Boeing has a strong history of cooperation with the Republic of Korea, going back a half century. Boeing shares productive partnerships with Korea in the commercial and defense aerospace markets and is committed to fostering long-term industrial growth for Korea through high-technology solutions that create jobs. The company employs nearly 190 highly skilled workers in Seoul, Busan, Gimpo, Sacheon, Seosan and Daegu. Today, Boeing works with nearly 20 Korean companies and spent more than $250 million with them in 2011, maintaining Korea’s position in the top quartile of nations with which Boeing does business.
A unit of The Boeing Company, Boeing Defense, Space & Security is one of the world's largest defense, space and security businesses specializing in innovative and capabilities-driven customer solutions, and the world's largest and most versatile manufacturer of military aircraft. Headquartered in St. Louis, Boeing Defense, Space & Security is a $32 billion business with 61,000 employees worldwide. Follow us on Twitter: @BoeingDefense.
Contact: 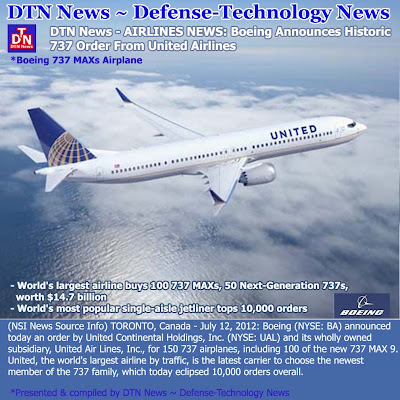 The deal, worth $14.7 billion at list prices, also includes 50 Next Generation 737-900ERs (Extended-Range).
"This order is a major step in building the world's leading airline, and we look forward to offering our customers the modern features and reliability of new Boeing airplanes, while also making our fleet more fuel efficient and environmentally friendly," said Jeff Smisek, United's President and CEO. "New aircraft deliveries support our flexible fleet plan, permitting us to tailor future capacity up or down, based on changes in demand or other market conditions."
United is the North American launch customer for the 737 MAX 9. The order continues the momentum for the 737 MAX, which now has more than 1,200 orders and commitments from 18 customers. Counting all variants, the 737 program now stands at 10,039 orders, further cementing the 737 as the undisputed best-selling jetliner in the world.
"United and Boeing share a rich history together and we are delighted United has chosen the 737 for its future fleet, renewing our partnership for decades to come," said Ray Conner, president and CEO of Boeing Commercial Airplanes. "We believe the 737 provides unsurpassed quality and value in the market and will provide efficiencies and other benefits to United's operations."
The Next-Generation 737 is the most fuel-efficient and reliable single-aisle airplane today with an eight percent per-seat operating cost advantage over the nearest competitor. The 737 MAX builds on these strengths with big advances in fuel-efficiency and environmental performance. Equipped with new LEAP-1B engines from CFM International and improvements such as the Advanced Technology Winglet, the MAX reduces fuel burn and CO2 emissions by 13 percent while maintaining the eight percent operating cost advantage over future competition.
These continuous improvements have powered the program to the impressive order milestone.
"To witness the first commercial airplane to surpass 10,000 orders is monumental," said Beverly Wyse, vice president and general manager of the 737 program. "The 737 has continuously evolved and provides improved performance, reliability and exceptional value for our customers."
The 737-900ER and 737 MAX 9 ordered by United can seat up to 180 passengers and feature the new Boeing Sky Interior. The sleek interior boasts modern lines, a spacious cabin with more headroom and LED lighting that offers vibrant color options.
United Airlines and United Express operate an average of 5,605 flights a day to 375 airports on six continents. In 2011, United flew more than two million flights that carried 142 million passengers, more than any other airline.
Contact:
Bernard Choi
Boeing Communications
+1 206-766-2917
bernard.choi@boeing.com
Megan McCarthy
Corporate Communications
United Airlines
+1 312-997-8640
megan.mccarthy@united.com
More information: www.newairplane.com/737max/united
Photos and captions are available here: http://boeing.mediaroom.com 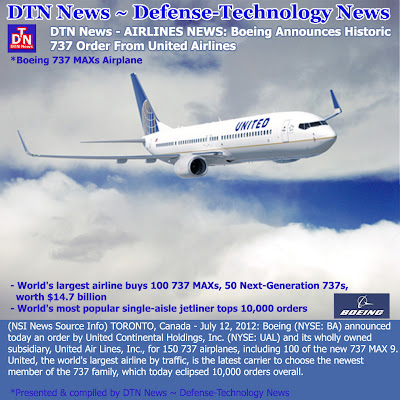 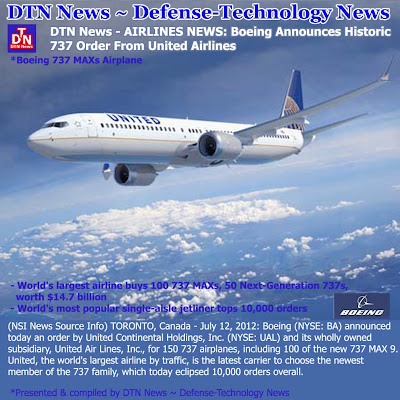