Source: DTN News - - This article compiled by Roger Smith from reliable sources Dr.Gobinathan Devathasan ~ Consultant Neurologist - MBBS M Med. (Int Med),  MRCP (UK), FAMS, CFAAN (USA), FRCP (Edin), FRCP (Glasg), FRCP (London)
(NSI News Source Info) Singapore - November 22, 2012: The axiom that sporadic Parkinson's disease cannot remit long term and is a neurodegenerative  disease of the brain is parallel to Euclid's 5th Postulate which is "on a point not lying on a given line not more than one line parallel to the given line can be drawn "and this held back many dimensional geometry for nearly 2000 years. 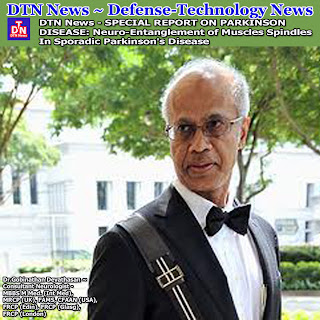 We assume the opposite axiom that PD begins extra-cranial and remission may be feasible and show the data leading to this end.

Methods: 86 patients over an 8 year period with early PD of Stage 1-11, were interviewed with a protocol with regards to sleep posture(1),trauma,peculiar habits,with the limbs, walking posture and any other observable motor abnormalities noted by the subjects or family members prior to diagnosis Muscle tone was assessed in 20 cases on the affected and 'unaffected side' by muscle ultrasound(2) in the relaxed state. Muscles sampled were both brachioradialis and hamstrings. PD patients with significant Leucoaraiosis (based on MRI) were excluded.

Results: in 75 patients a triggering periperal cause can be identified and its temporal relationship before  onset of disease. Muscle ultrasound showed that there is diffuse increase of resting tone even in the apparently unaffected side. Abnormal sleep posture is the most common (55%), or 80% overlapping factors are considered; followed by minor trauma to a limb and persistent pain  (18%), if peculiar tonic posturing of a limb that leads to increase muscle tone (16%) and extreme sports (5%). These factors precede onset of disease usually by at least five years.

Discussion: ENTANGLEMENT and COHERENCE, is now recognized in fundamental physics to occur also at a macro level (e.g large school of fish swimming in harmony}. Rather than neuronal synaptic pathways, we propose synchronous ENTANGLEMENT of muscle afferent spindle discharges which reset higher diffusely with time in tune to the tone of the affected limb as implied by ultrasound of the four muscle groups. This results in massive afferent subcortical input overworking and depleting the dopaminergic fibers of the substantia nigra and indirectly increasing gamma fusimotor activity at the spinal level. Mutative changes leading to a-synuclein, parkin, LRRK2 could be just secondary changes via gene switches (Nature 4). The review of Abbruzzese et al (5) also supports an abnormal afferent inflow hypothesis although here abnormal gating was proposed.

Conclusion: We advised all patients to eliminate the triggering factor e.g. by habitual turning in sleep. and in 12 cases the PD remitted (more than six months) and medication stopped, providing further evidence for disorder or default of muscle afferents and that the above mechanism is involved. We propose that neurologists drop the term neurodegenerative for neuro-entanglement disorders as Alzheimer's, ALS, traumatic brain-encephalopathy may have similar mechanisms.


Disclaimer statement
Whilst every effort has been made to ensure the accuracy of the information supplied herein, DTN News ~ Defense-Technology News cannot be held responsible for any errors or omissions. Unless otherwise indicated, opinions expressed herein are those of the author of the page and do not necessarily represent the corporate views of DTN News ~ Defense-Technology News