Constellation NewEnergy Inc., Baltimore, Maryland, has been awarded a maximum $7,046,395 firm-fixed-price contract for electricity and ancillary services. This was a competitive acquisition with seven responses received. This is a one-year contract with no option periods. Locations of performance are Maryland and Texas, with a Jan. 31, 2017, performance completion date. Using military service is Navy. Type of appropriation is fiscal 2016 through fiscal 2017 Navy working capital funds. The contracting activity is the Defense Logistics Agency Energy, Fort Belvoir, Virginia (SPE600-16-D-8008). 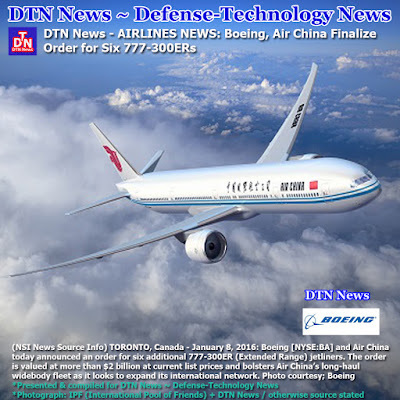 “The 777-300ER has consistently proved its value as a long-haul flagship for our customers around the world, making it the preferred choice for Air China’s international expansion,” said Ihssane Mounir, senior vice president, Northeast Asia Sales, Boeing Commercial Airplanes. “This order reflects the strength of our decades-long relationship with Air China and we look forward to partnering with Air China on additional opportunities in the future.”

With this new order, Air China will increase its unfilled airplane orders with Boeing to 90 units, which include orders for new 787-9 Dreamliners.

The 777-300ER is one of the most fuel and cost-efficient airplanes in its class as well as the most reliable twin-aisle aircraft in the world. It also has the highest cargo capability of any passenger airplane in service. The 777-300ER will receive further improvements in 2016 designed to reduce fuel use by another two percent.