CONTRACTS
NAVY
Blue Tech, San Diego, Calif. (M67854-12-D-4099); CDWG, Vernon Hills, Ill. (M67854-12-D-4100); Countertrade, Arvada, Colo. (M67854-12-D-4101); Dell, Round Rock, Texas (M67854-12-D-4102); GTSI Corp., Herndon, Va. (M67854-12-D-4103); Intelligent Decisions, Inc., Ashburn, Va. (M67854-12-D-4104); Iron Bow Technologies, Chantilly, Va. (M67854-12-D-4105); ITG/EPLUS, Falls Church, Va. (M67854-12-D-4106); NCS Technologies, Inc., Gainesville, Va. (M67854-12-D-4107); and World Wide Technology, Inc., St. Louis, Mo. (M67854-12-D-4108), are each being awarded an indefinite-delivery/indefinite-quantity, multiple-award contract for commercial-off-the-shelf (COTS) computer systems, including ruggedized and non-ruggedized desktops and laptops, as well as servers and other associated computer equipment and accessories.  This equipment, collectively referred to as Marine Corps Common Hardware Suite computing equipment, will provide standardized computing equipment and worldwide integrated logistics support for the Marine Corps operating forces and to the Department of Navy, while achieving the lowest cost of ownership through centralized procurement of high quality, COTS hardware.  The aggregate not-to-exceed amount for these multiple award contracts combined is $775,000,000 and represents a three-year base period with a two-year option, and the companies will have the opportunity to bid on each individual delivery order.  Work will be performed in various locations in and out of the United States, depending on which companies receive the delivery orders.  Funds will be obligated at the delivery order level; therefore there are no expiring funds.  These contracts were solicited via a multiple award electronic request for proposals and 14 offers were received.  Marine Corps Systems Command in Quantico, Va., is the contracting activity.

Source: DTN News - - This article compiled by Roger Smith from reliable sources By Adam Goldman and Matt Apuzzo - AP (Fox & Yahoo)(NSI News Source Info) TORONTO, Canada - May 8, 2012:  Experts at the FBI's explosives lab in Virginia are picking apart a sophisticated new al-Qaida bomb to figure out whether it could have slipped past airport security and taken down a commercial airplane. U.S. officials say the unexploded bomb represents an intelligence prize, the result of a covert CIA operation in Yemen that thwarted a suicide mission in recent weeks. 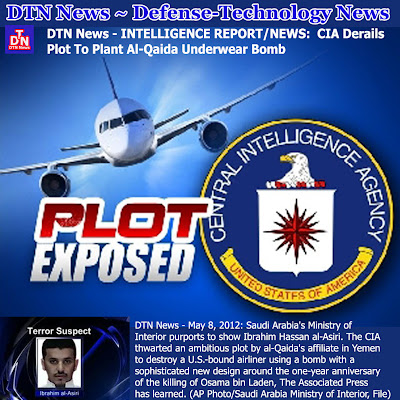 The operation unfolded even as the White House and Department of Homeland Security assured the American public that they knew of no al-Qaida plots against the U.S. around the anniversary of bin Laden's death. The operation was carried out over the past few weeks, officials said.
"We have no credible information that terrorist organizations, including al-Qaida, are plotting attacks in the U.S. to coincide with the anniversary of bin Laden's death," White House press secretary Jay Carney said on April 26.
On May 1, the Department of Homeland Security said, "We have no indication of any specific, credible threats or plots against the U.S. tied to the one-year anniversary of bin Laden's death."
The White House did not explain those statements Monday.
The AP learned about the thwarted plot last week but agreed to White House and CIA requests not to publish it immediately because the sensitive intelligence operation was still under way. Once officials said those concerns were allayed, the AP decided to disclose the plot Monday despite requests from the Obama administration to wait for an official announcement Tuesday.
The FBI and Department of Homeland Security acknowledged the existence of the bomb late Monday, but there were no immediate plans to adjust security procedures at airports. Other officials, who were briefed on the operation, insisted on anonymity to discuss details of the plot, many of which the U.S. has not officially acknowledged.
"The device never presented a threat to public safety, and the U.S. government is working closely with international partners to address associated concerns with the device," the FBI said in a statement.
It's not clear who built the bomb, but, because of its sophistication and its similarity to the Christmas bomb, counterterrorism officials suspected it was the work of master bomb maker Ibrahim Hassan al-Asiri or one of his protégées. Al-Asiri constructed the first underwear bomb and two others that al-Qaida built into printer cartridges and shipped to the U.S. on cargo planes in 2010.
Both of those bombs used a powerful industrial explosive. Both were nearly successful.
The operation is an intelligence victory for the United States and a reminder of al-Qaida's ambitions, despite the death of bin Laden and other senior leaders. Because of instability in the Yemeni government, the terrorist group's branch there has gained territory and strength. It has set up terrorist camps and, in some areas, even operates as a de facto government.
But along with the gains there also have been losses. The group has suffered significant setbacks as the CIA and the U.S. military focus more on Yemen. On Sunday, Fahd al-Quso, a senior al-Qaida leader, was hit by a missile as he stepped out of his vehicle along with another operative in the southern Shabwa province of Yemen.
Al-Quso, 37, was on the FBI's most wanted list, with a $5 million reward for information leading to his capture. He was indicted in the U.S. for his role in the 2000 bombing of the USS Cole in the harbor of Aden, Yemen, in which 17 American sailors were killed and 39 injured.
Al-Quso was believed to have replaced Anwar al-Awlaki as the group's head of external operations. Al-Awlaki was killed in a U.S. airstrike last year.