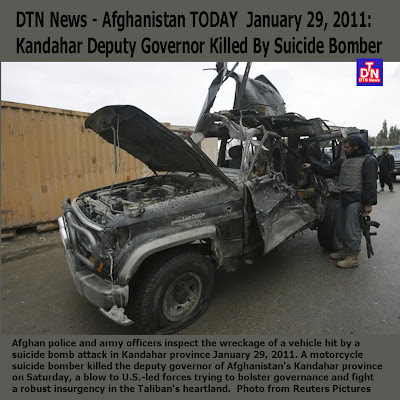 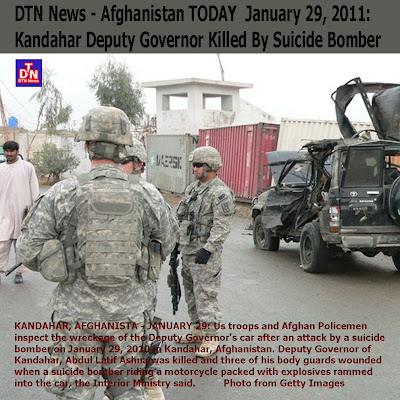 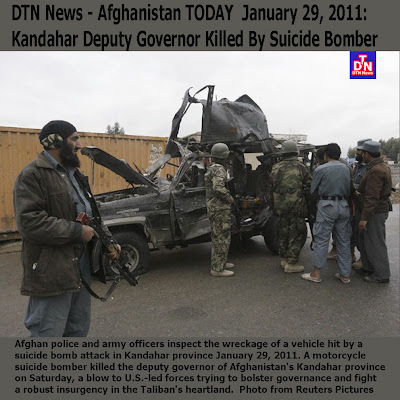 Abdul Latif Ashna had just left his home and was on his way to his office when a suicide bomber on a motorcycle blew himself up near his vehicle.

One of his bodyguards and his driver were wounded, as were two passers-by in the Afghan town.

Mr Ashna, a trained engineer, had been deputy governor since April 2010.

He previously worked for UN Habitat, the UN programme to improve the urban environment, before teaching at Kandahar University.

Kandahar, the birthplace of Taliban leader Mullah Omar, is at the heart of a nine-year insurgency by the Islamic militants.

Besides foreign troops and Afghan soldiers and police, the Taliban also regularly target local officials whom they accuse of being traitors working with the international forces and the Western-backed Kabul government.

The deputy mayor of Kandahar, Noor Ahmad Nazari, was killed in October, six months after his predecessor was assassinated.

The governor of Kandahar, Tooryalai Wesa, survived a bomb attack on his convoy in November 2009.

"This is the work of enemies of Afghanistan, the Taliban. They kill anyone who is working for Afghanistan's future, to rebuild the country," said Mr Wesa.

Saturday's attack on the deputy governor came a day after a suicide bomber blew himself up in a central Kabul supermarket popular with Westerners, killing at least eight people, including three foreign women.

The Taliban also claimed responsibility for the attack, the first to target foreign civilians in the capital since August 2010.

DTN News - DEFENSE NEWS: Australia Continues To Boost Its Military, With The Purchase Of 12 New Submarines A Part Of A US$44Bn Upgrade

DTN News - DEFENSE NEWS: Australia Continues To Boost Its Military, With The Purchase Of 12 New Submarines A Part Of A US$44Bn Upgrade

Source: DTN News - - This article compiled by Roger Smith from reliable sources Research and Markets On Friday January 28, 2011, 4:00 pm EST
(NSI News Source Info) TORONTO, Canada - January 29, 2011: Australia's relationship with China has become increasingly important in recent years, owing to China's emergence as Australia's biggest export destination, having overtaken Japan. Australia has traditionally been a very close ally of the US, but Canberra must increasingly tread a fine line between fostering closer economic cooperation with Beijing while guarding against China's rising military power. The Australian government has continued to boost its military capabilities, with the purchase of 12 new submarines as part of a US$44bn upgrade plan. 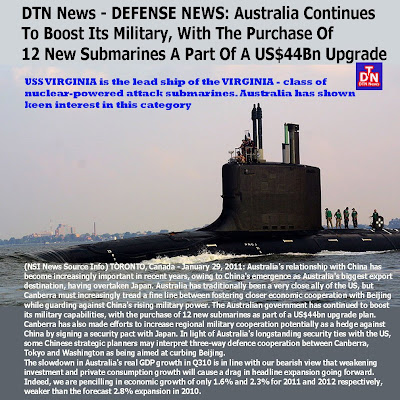 Canberra has also made efforts to increase regional military cooperation potentially as a hedge against China by signing a security pact with Japan. In light of Australia's longstanding security ties with the US, some Chinese strategic planners may interpret three-way defence cooperation between Canberra, Tokyo and Washington as being aimed at curbing Beijing.

The slowdown in Australia's real GDP growth in Q310 is in line with our bearish view that weakening investment and private consumption growth will cause a drag in headline expansion going forward. Indeed, we are pencilling in economic growth of only 1.6% and 2.3% for 2011 and 2012 respectively, weaker than the forecast 2.8% expansion in 2010.

Australia's economic growth decelerated considerably in Q310, expanding by only 0.2% quarter-on-quarter (q-o-q) (seasonally-adjusted), from a revised 1.1% registered in Q210. The recent slowdown in the country's real GDP expansion was in line with our view that the rise in borrowing costs, fall in consumer confidence, and weakening residential property sector will lead to lower headline growth going forward. With this in mind, we maintain our view that the Australian economy will expand by only 1.6% in 2011, before rebounding slightly to 2.3% in 2012. These figures are much lower than our projected 2.8% growth for Australia in 2010