Source: DTN News - - This article compiled by Roger Smith from reliable sources By Mark Landler & David E. Sanger contributed reporting - The New York Times(NSI News Source Info) TORONTO, Canada - March 3, 2012: On the eve of a crucial visit to the White House by Prime Minister Benjamin Netanyahu of Israel, that country’s most powerful American advocates are mounting an extraordinary public campaign to pressure President Obama into hardening American policy toward Iran over its nuclear program.From the corridors of Congress to a gathering of nearly 14,000 American Jews and other supporters of Israel here this weekend, Mr. Obama is being buffeted by demands that the United States be more aggressive toward Iran and more forthright in supporting Israel in its own confrontation with Tehran. 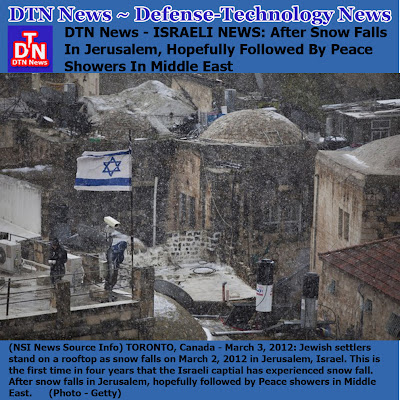 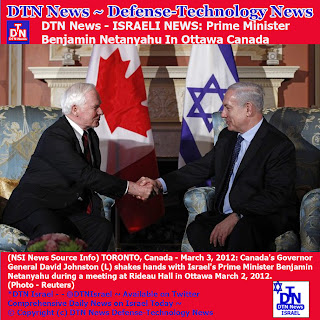 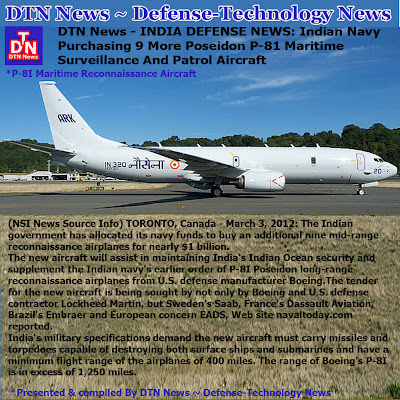 The new aircraft will assist in maintaining India's Indian Ocean security and supplement the Indian navy's earlier order of P-8I Poseidon long-range reconnaissance airplanes from U.S. defense manufacturer Boeing.
The tender for the new aircraft is being sought by not only by Boeing and U.S. defense contractor Lockheed Martin, but Sweden's Saab, France's Dassault Aviation, Brazil's Embraer and European concern EADS, Web site navaltoday.com reported.India's military specifications demand the new aircraft must carry missiles and torpedoes capable of destroying both surface ships and submarines and have a minimum flight range of the airplanes of 400 miles. The range of Boeing's P-8I is in excess of 1,250 miles.
In 2008 India signed an initial procurement contract with Boeing for eight P-8I Poseidon airplanes worth $2.1 billion, with another contract for an additional four P-8Is expected to be signed this month, as India intends to increase its fleet of Poseidon P-81 patrol aircraft to 24 in total. 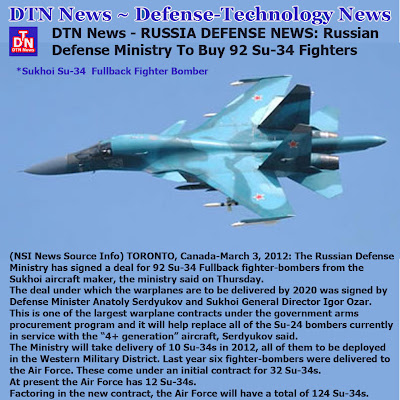 The deal under which the warplanes are to be delivered by 2020 was signed by Defense Minister Anatoly Serdyukov and Sukhoi General Director Igor Ozar.
This is one of the largest warplane contracts under the government arms procurement program and it will help replace all of the Su-24 bombers currently in service with the “4+ generation” aircraft, Serdyukov said.
The Ministry will take delivery of 10 Su-34s in 2012, all of them to be deployed in the Western Military District. Last year six fighter-bombers were delivered to the Air Force. These come under an initial contract for 32 Su-34s.
At present the Air Force has 12 Su-34s.
Factoring in the new contract, the Air Force will have a total of 124 Su-34s.
The ministry previously said a total of 70 Su-34s will be delivered by 2015.
Commenting on the deal, Douglas Barrie, air warfare specialist at International Institute for Strategic Studies in London, said “the Su-34 - previously known as the Su-27IB - has been long in the gestation.”
“The program began in the 1980s and has suffered as a result of funding problems. It is entering service well over a decade after it was envisaged originally to be replacing the Su-24 Fencer.”
However the Su-34 will - with the appropriate avionic and weapons systems - provide the air force with a capable long range strike platform, with considerably more punch than the Su-24, he said.
“Work is continuing to integrate modern air-to-surface weaponry now in development in Russia on the Su-34, with trials being carried out at the air force test center at Akhtubinsk.”
The news of the contract comes a week after Russia partially resumed flights of Su-24 Fencer tactical bombers after one of them crashed in Russia’s Urals.
All Su-24s were grounded after the crash, in the woods of the Kurgan region during a routine flight on February 13. Both pilots ejected safely. The crash was the third of a Su-24 in Russia over the last four months. The two previous crashes occurred in October and December 2011.
It has been in service with the Russian Air Force since the mid-1970s. However, in recent years Russia has gradually been phasing out the planes, which have a patchy safety record.
The Defense Ministry earlier said the Air Force will procure over 1,500 new aircraft by 2020.
Russia started the full-scale production of Su-34s in 2008 at a Novosibirsk-based aircraft-manufacturing plant, a subsidiary of the Sukhoi Aircraft Holding.
Designed by Sukhoi, the $36-million Su-34 fighter-bomber is a two-seat strike aircraft fitted with twin AL-31MF afterburner turbojet engines.
It is designed to deliver high-precision strikes on heavily-defended targets under any weather conditions, day or night, and is equipped with a 30-mm GSh-301 cannon, up to 12 Alamo or Archer AAMs, ASMs, and bombs.

Source: DTN News - - This article compiled by Roger Smith from reliable sources GlobalFirepower.com (GFP)(NSI News Source Info) TORONTO, Canada - March 3, 2012: GFP provides a unique analytical display of data covering global military powers with statistics compiled through various sources. All manner of countries are considered in the ranking, a spectrum helping to produce a near-complete comparison of relative military strengths from across the globe. The user should note that nuclear capability is not taken into account for the final ranking for this listing is purely a "numbers game" meant to spark debate and including nuclear weapons would clearly defeat its purpose. Therefore GFP comparisons are for consideration in a conventional war based solely on each individual nation's capabilities on land, at sea and through the air while including logistical and financial aspects when waging total war. Sources are stated whenever possible though some statistics are estimated if official numbers are not available.Final ThoughtsIt goes without saying that lists such can be completely subjective, though the GFP intention is to be wholly unbiased.The final GFP rankings are based on a formula taking some 45 factors into account and compiling totals against each country, applying bonuses and penalties as needed to generate this list.