wo Chinese fighter jets crossed an unofficial dividing line in the Taiwan Strait late last month in pursuit of a U.S. spy aircraft, according to defense sources in Taipei and Beijing.

The incident marked the first time in more than a decade that Chinese military aircraft have entered Taiwan’s side of the 180km-wide strait. According to Taiwan’s defense ministry, two Chinese Su-27 fighter jets briefly crossed the so-called “middle line” on June 29.

Confirmation of the close encounter comes as the U.S. and China are trying to cool tensions in the South China Sea and safeguard a recent improvement in bilateral military relations.

Taipei, whose relations with Beijing have also been on the mend, moved to downplay the incident. “This was not between Taiwan and China, but between China and the U.S.,” said a senior Taiwanese defense official. “The Chinese crossed the line to repel a perceived intrusion by a U.S. reconnaissance aircraft.”

China and Taiwan have long respected the middle line, which was drawn by the U.S. when it signed a mutual defense treaty with the island in 1954. The line functions as a buffer zone between China and Taiwan’s militaries, which still regard each other as enemies.

Chinese military aircraft have not crossed the middle line since July 1999, at a time of heightened tensions with Taiwan. That summer the People’s Liberation Army Airforce, which had rarely patrolled the area previously, flew hundreds of sorties over the Taiwan Strait. 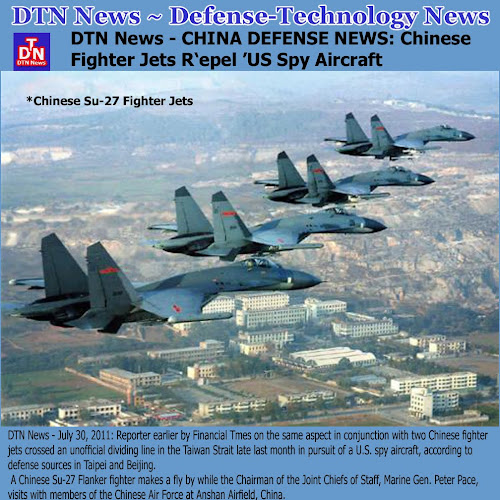 China has also long objected to reconnaissance patrols of its coastline, especially since a PLA jet fighter collided with a U.S. spy plane in April 2001 near Hainan island. The PLA pilot died and Chinese authorities detained the U.S. crew for 11 days in a tense stand-off.

“This once again shows that U.S. military activity very close to our territory is a destabilizing factor in the region,” said a Chinese defense source. Chinese and U.S. military officials declined to comment.

The Pentagon declined to comment on this specific case but said U.S. reconnaissance flights in the area were “fairly routine” and were conducted in international airspace, as were the Chinese intercepts.

While Beijing still claims sovereignty over Taiwan and has threatened an invasion if the self-ruled island declared independence, relations between the two sides have warmed since Ma Ying-jeou was elected president in 2008.

The Taiwanese official said the island’s air force scrambled two fighters in reaction to the intrusion. He added there had not been any direct contact between the Chinese and Taiwanese planes.

According to Taiwan media, the U.S. spy plane left the area before it could be intercepted by the PLA fighters.

Additional reporting by Robin Kwong in Taipei and Anna Fifield in Washington.