CONTRACTS
MISSILE DEFENSE AGENCY
Raytheon Missile Systems Co., Tucson, Ariz., was awarded a sole-source, cost-plus-incentive-fee contract modification to contract HQ0276-13-C-0001.  The total value of this effort is $126,000,000, increasing the total contract value from $53,446,254 to $179,446,254.  Under this modification, the contractor will procure the material required to manufacture up to 29 SM-3 Block IB missiles.  Work will be performed in Tucson, Ariz.  with an estimated completion date of Sept. 30, 2016.  Fiscal 2013 Defense Wide Procurement funds will be used to fund this effort.  Contract funds will not expire at the end of the current fiscal year.  This is not a foreign military sales acquisition.  Missile Defense Agency, Dahlgren, Va., is the contracting activity.

ARMY
Great Lakes Dredge & Dock Company LLC, Oak Brook, Ill., was awarded a firm-fixed-price contract with a maximum value of $25,590,800 for the services in support of beach restoration project in Monmouth, N.J.  Fiscal 2013 procurement funds are being obligated on this award.  The bid was solicited through the Internet, with four bids received.  The Army Corps of Engineers, New York, N.Y., is the contracting activity (W912DS-13-C-0033).

Etcon Inc., doing business as JHL Construction, Gatesville, Texas, was awarded a firm-fixed-price, multi-year contract with a maximum value of $22,130,444 for paving services at Fort Hood, Texas.  Type of appropriation will be determined with each order.  The bid was solicited through the Internet, with seven bids received.  The Army Contracting Command, Fort Hood, Texas, is the contracting activity (W91151-13-D-0009).

Aerostar SES LLC, Anchorage, Alaska, was awarded a firm-fixed-price, multi-year contract with a maximum value of $10,000,000 for environmental remediation services.  Fiscal 2013 military construction funds are being obligated on this award.  One bid was solicited, with one bid received.  The Army Corps of Engineers, Jacksonville, Fla., is the contracting activity (W912EP-13-D-0028).

AIR FORCE
Boeing Co., Springfield, Va., has been awarded a $15,940,000 modification (P00006) for the Combat Track II (CTII) sustainment contract (FA8707-11-D-0002) for CTII sustainment and tech refresh.  The total cumulative value of the contract is $30,310,000.   No money is being obligated at this time.  Work will be performed at Chantilly, Va., and is expected to be completed by June 25, 2016.  This is a sole-source acquisition.  The contracting activity is Air Force Life Cycle Management Center/HBBI, Hanscom Air Force Base, Mass.

NAVY
BAE San Diego Ship Repair, San Diego, Calif., is being awarded a $15,361,658 modification to previously awarded contract (N00024-10-C-4407) to exercise an option for the USS Green Bay (LPD 20) fiscal 2013 dry-docking selected restricted availability.  This option exercise is for the multi-ship, multi-option program for the LPD 17 class.  BAE San Diego Ship Repair will provide planning, repair, alteration and material support services for LPD 17class modernization.  Work will be performed in San Diego, Calif., and is expected to be completed by June 2014.  Fiscal 2013 Operations & Maintenance, Navy funding in the amount of $15,361,658 will be obligated at the time of award.  Contract funds in the amount of $15,361,658 will expire at the end of the current fiscal year.  The Southwest Regional Maintenance Center, San Diego, Calif., is the contracting activity.

The Massachusetts Institute of Technology, Cambridge, Mass., is being awarded a $10,399,592 cost-reimbursement contract for research and development in support of the biologically derived Medicines on Demand program to provide battlefield medical supply for front line military medics that is responsive to emergency settings and emergent in-theater needs. This two-year contract includes one, two-year option which, if exercised, would bring the potential value of this contract to $21,784,843.  Work will be performed in Cambridge, Mass., and work is expected to be completed June 20, 2015.  Fiscal 2013 Research, Development, Test and Evaluation funds in the amount of $10,399,592 will be obligated at the time of award.  Contract funds will not expire at the end of the current fiscal year.  This contract was competitively procured via a Defense Advanced Research Projects Agency broad agency announcement (BAA 12-37), and published on the Federal Business Opportunities website, with 12 proposals received and three were selected for award.  The Space and Naval Warfare Systems Center Pacific, San Diego, Calif., is the contracting activity (N66001-13-C-4025).

AGVIQ LLC*, Anchorage, Alaska, is being awarded a $9,135,713 cost-reimbursement modification to increase the maximum dollar value of an indefinite-delivery/indefinite-quantity contract (N62470-12-D-7004) task order for the Remedial Action Fieldwork, Comprehensive Environmental Response, Compensation, Liability Act 1980 and Petroleum, Oil Lubricant and one year of long term monitoring at Submarine Base, New London.  After award of this modification, the total cumulative contract task order value will be $10,795,290.  Work will be performed in Groton, Conn., and is expected to be completed by April 2015.  Fiscal 2013 Environmental Restoration, Navy contract funds in the amount of $9,135,713 are obligated on this award and will not expire at the end of the current fiscal year.  The Naval Facilities Engineering Command, Mid-Atlantic, Norfolk, Va., is the contracting activity.

Electric Boat Corp., Groton, Conn., is being awarded a $7,562,531 cost-plus-fixed-fee modification to previously awarded contract (N00024-11-C-2111) for the continued procurement and development of a Sea Sentry mast and sensor.  Work will be performed in Groton, Conn., and is scheduled to be completed by August 2017.  Fiscal 2012 and 2013 Research, Development, Test & Evaluation contract funds in the amount of $7,562,531 will be obligated at the time of award.  Contract funds will not expire at the end of the current fiscal year.  The Supervisor of Shipbuilding Conversion and Repair, Groton, Conn., is the contracting activity. 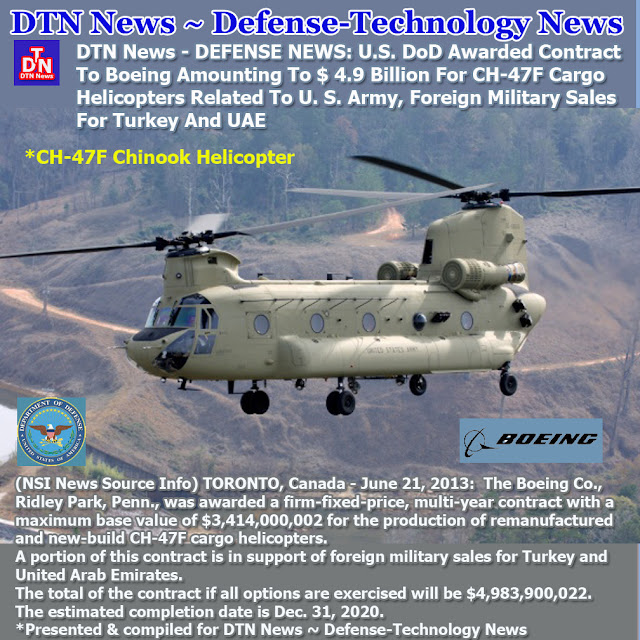 A portion of this contract is in support of foreign military sales for Turkey and United Arab Emirates.


One bid was solicited, with one bid received.  The Army Contracting Command, Redstone Arsenal, Ala., is the contracting activity (W58RGZ-13-C-0002). 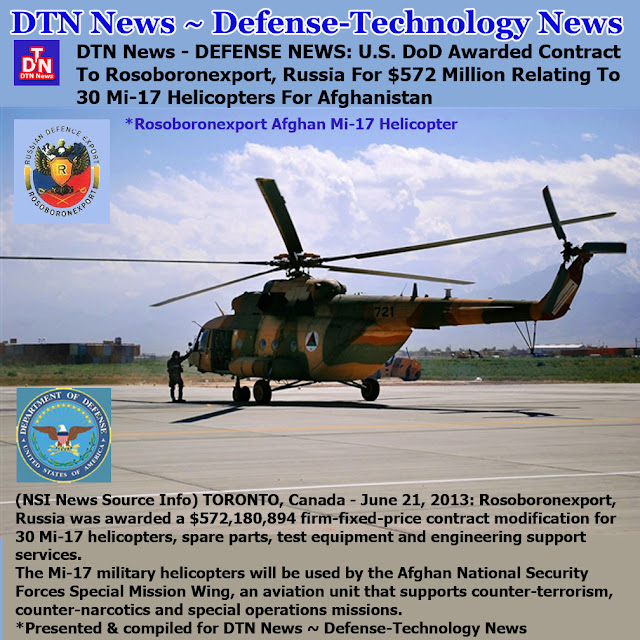 Work will be performed in Russia and is expected to be complete by Dec. 31, 2014.
This contract involves foreign military sales.  FY12 funds in the amount of $572,180,894 are being obligated at time of award. 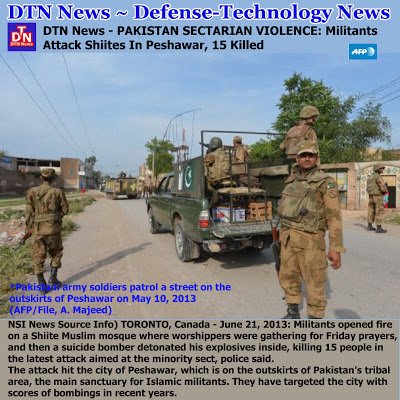 The attack hit the city of Peshawar, which is on the outskirts of Pakistan's tribal area, the main sanctuary for Islamic militants. They have targeted the city with scores of bombings in recent years.

Three militants initiated the attack on the mosque, located inside a Shiite religious school, by firing on a policeman who was standing guard outside, said senior police official Shafiullah Khan. The policeman was critically wounded, Khan said.

The militants then entered the mosque, where one of them detonated his suicide vest. The other two militants escaped, and police have launched a search operation to find them, Khan said. Fifteen people were killed and scores more wounded, he said.

Zawar Hussain, who was inside the mosque when the attackers struck, said their firing set off panic among the roughly 300 worshippers inside. Then came the explosion.

"After the blast, I fell down. People were crying for help," said Hussain. "I saw bodies and badly injured worshippers everywhere."

Local TV video showed blood splattered on the floor and walls of the mosque. Broken glass littered the floor, and there were holes in the walls and ceiling caused by ball bearings packed in with the bomber's explosives to cause maximum damage and casualties. Relatives at a local hospital wailed in grief as rescue workers wheeled in wounded victims, their clothes soaked in blood.

No one has claimed responsibility for the bombing.

Radical Sunni Muslims who consider Shiites to be heretics have stepped up attacks against the minority sect in Pakistan over the last several years.

On Saturday, a bomb that appeared to be targeting Shiites ripped through a bus carrying female university students in the southwest city of Quetta, killing 14 people. Militants then attacked a hospital where wounded victims were taken, killing more people.

The militant group Lashkar-e-Jhangvi claimed responsibility for the attack in Quetta and could be suspected in Friday's Peshawar attack as well. The group has carried out many of the attacks against Shiites in Pakistan in recent years, especially in Baluchistan province, where Quetta is the capital.

Although most Sunnis and Shiites live peacefully together in Pakistan, the country has a long history of sectarian attacks by radicals on both sides.

In the 1980s and 1990s, Pakistan became the scene of a proxy war between mostly Shiite Iran and Sunni Saudi Arabia, with both sides funneling money to sectarian groups that regularly targeted each other.

Most of the attacks in recent years have been by radical Sunnis against Shiites. Last year was one of the most deadly for Shiites in Pakistan's history, according to Human Rights Watch, which said more than 400 Shiites were killed.

This year is shaping up to be even deadlier. Two attacks carried out by Lashkar-e-Jhangvi in Quetta at the beginning of the year killed nearly 200 people.

The sectarian violence presents a significant challenge to Pakistan's new government, which took power earlier this month under the leadership of Prime Minister Nawaz Sharif.

Human rights activists and members of the Shiite community criticized the last government for failing to do enough to stop the attacks. The new government has promised to do more, but some critics have questioned whether Sharif will follow through. His party has done little to crack down on Lashkar-e-Jhangvi and other militant groups in its home province of Punjab in central Pakistan, even though the party controlled the provincial government for the last five years.

Paris Airshow: Airbus bags last-minute orders worth $39bStraits TimesPARIS (REUTERS) - European planemaker Airbus clinched deals for another 90 planes on Thursday, taking its total orders and commitments at the Paris Airshow to 466 aircraft worth US$68.7 billion (S$86.4 billion) at list prices. The tally includes firm ...See all stories on this topic »