U.S. SPECIAL OPERATIONS COMMAND
DRS Systems, Inc., Parsippany, N.J., was awarded a five-year indefinite-delivery/indefinite-quantity contract with firm-fixed-price delivery orders for the purchase of Spot on Target in support of U.S. Special Operations Command Procurement Division.  The estimated contract value is $40,218,000.  The work will be performed in Dallas, Texas, and Melbourne, Fla, and ordering will be completed by November 2016.  U.S. Special Operations Command, MacDill Air Force Base, Fla., is the contacting activity (H92222-12-D-0003). 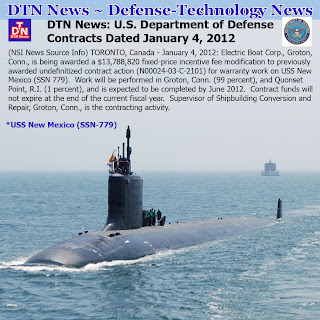 Electric Boat Corp., Groton, Conn., is being awarded a $13,788,820 fixed-price incentive fee modification to previously awarded undefinitized contract action (N00024-03-C-2101) for warranty work on USS New Mexico (SSN 779).  Work will be performed in Groton, Conn. (99 percent), and Quonset Point, R.I. (1 percent), and is expected to be completed by June 2012.  Contract funds will not expire at the end of the current fiscal year.  Supervisor of Shipbuilding Conversion and Repair, Groton, Conn., is the contracting activity.

Source: DTN News - - This article compiled by Roger Smith from reliable sources Strategy Page
(NSI News Source Info) TORONTO, Canada - January 4, 2012: In the south, security forces chip away at the criminal infrastructure that supports the smugglers and Islamic terrorists. The smuggling has long been a major part of the economy, and local culture. The government generally tolerated it as long as the gangsters were discreet. Radical Islam is something that was always just beneath the surface. In the last few decades, Islamic radicalism became fashionable and found material, if not moral, support from the smuggling gangs. That made the Islamic terrorists much more difficult to find and catch. The terrorists are being protected by the same loyalties and secrecy that has long protected the criminal gangs. But even some of the gangsters are getting tired of all the violence, and additional security forces, the Islamic terrorism has brought to the neighborhood. 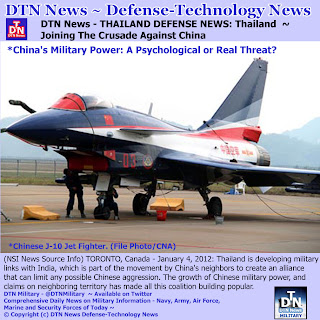 In addition to making peace with Cambodia, the government has hustled of late to improve diplomatic and economic relations with the newly elected government of Burma. Although army officers still appear to be calling the shots in Burma, there is also some reform. Thailand hosts over 150,000 refugees from Myanmar (Burma) in Thailand, nearly all of them from tribes that have been fighting the Burmese government for centuries. But recently, the Burmese government has made peace deals with most of the tribes. The government is also developing military links with India, which is part of the movement by China's neighbors to create an alliance that can limit any possible Chinese aggression. The growth of Chinese military power, and claims on neighboring territory has made all this coalition building popular.

The days before and after New Years Day are occasions for lots of celebrations. This involves a lot of driving and drinking. Therefore much of the army was assigned to monitor traffic and try to catch drunk drivers before they killed someone. About half the 300 people killed during these holidays are the result of drinking. Some ten times as many people are injured. This is a problem even in the Moslem south, where Islamic conservatives discourage the use of alcohol.

January 1, 2012: In the south, two soldiers were killed by a roadside bomb.

December 21, 2011:  Thailand and Cambodia have agreed to withdraw troops from the border after the International Court of Justice establishes where the border actually is. No date was given for when the withdrawal was to take place, because the international courts tend to take a while to complete their work.
*Link for This article compiled by Roger Smith from reliable sources Strategy Page*Speaking Image - Creation of DTN News ~ Defense Technology News *This article is being posted from Toronto, Canada By DTN News ~ Defense-Technology News Contact:dtnnews@ymail.com ©COPYRIGHT (C) DTN NEWS DEFENSE-TECHNOLOGY NEWS

Source: DTN News - - This article compiled by Roger Smith from reliable sources Reuters (NSI News Source Info) TORONTO, Canada - January 4, 2012: Al Qaeda, the Afghan Taliban and Pakistani militants have held a series of meetings aimed at containing what could soon be open warfare between the two most powerful Pakistani Taliban leaders, militant sources have said.
Hakimullah Mehsud, the head of the Pakistani Taliban, also known as the Tehrik-e-Taliban Pakistan (TTP), and his deputy, Wali-ur-Rehman, were at each other's throats, the sources said. 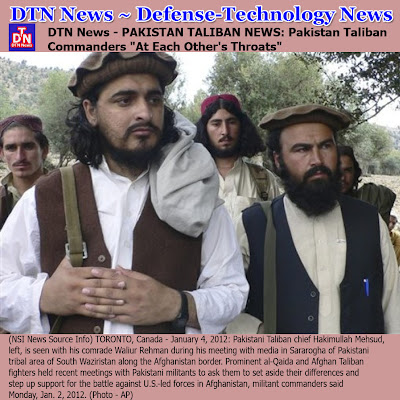 "You will soon hear that one of them has eliminated the other, though hectic efforts are going on by othercommanders and common friends to resolve differences between the two," one TTP commander said.Any division within the TTP could hinder the Afghan Taliban and al Qaeda's struggle in Afghanistan against the United States and its allies, making it more difficult to recruit young fighters and disrupting safe havens in Pakistan used by the Afghan militants.Despite multiple reports of the Rehman-Mehsud split, Rehman told Reuters on Tuesday there was no problem between the two."There are no differences between us," Rehman said.
The TTP, formed in 2007, is an umbrella group of various Pakistani militant factions operating in Pakistan's unruly northwestern tribal areas along the porous border with Afghanistan.It has long struggled with its choice of targets. Some factions are at war with the Pakistani state while others concentrate on the fight against the United States and its allies in Afghanistan.There has been a noticeable decrease in militant attacks in Pakistan, but there continue to be random acts of violence across the country.Al Qaeda and Afghan Taliban commanders are asking the TTP to provide more men for the fight in Afghanistan and are looking to smooth over the dispute between Mehsud and Rehman
LONG-STANDING FEUDSTaliban sources said Rehman had ordered his fighters to kill Mehsud because of his increasing closeness with al Qaeda and its Arab contingent.Mehsud's former deputy has also alleged the TTP chief received money from Pakistan's arch-rival, India, to kill a former Pakistan spy agency official acting as a mediator between the Pakistani Taliban, Afghan insurgents and the Pakistani government.The reported enmity between Mehsud and Rehman is not the only conflict within the TTP ranks.
Mehsud has a long-standing feud with militant commanders Maulvi Nazeer in South Waziristan and Hafiz Gul Bahadur in North Waziristan, both of whom have non-aggression agreements with the Pakistani military.Mehsud's men have also fought with the militia under the control of Fazal Saeed Haqqani, the former TTP head in the Kurram tribal region. He has accused Mehsud of killing his commanders and innocent people and kidnapping for ransom.
Haqqani, who is close to the militant Afghan Haqqani network, broke away from the TTP last year.A pamphlet distributed by militants in North Waziristan this week announced the formation of a council to try to resolve the conflicts.
"All jihadi forces have jointly, on the recommendation of the Islamic Emirate of Afghanistan, formed a five-member commission which will be known as the Shura Muraqba," the pamphlet said, using the term by which the Afghan Taliban describe themselves."The Shura Muraqba will be working to resolve differences and problems between mujahideen."It said that any mujahideen -- or holy warriors -- found to have committed an "unlawful" killing or kidnapping would be punished under Islamic law. It is likely any attack on a fellow mujahideen commander would be considered "unlawful.""All mujahideen should respect the decisions of the council that has been set up," a senior commander of the Haqqani faction in Kurram said."If people continue to do as they like, the situation will not improve. Things will instead get much worse."(Editing by Nick Macfie and Paul Tait)