DTN News - OSAMA BIN LADEN NEWS: Bin Laden Was 'Betrayed By One Of His Jealous Wives' Who Revealed Location Of His Secret Pakistan Compound

DTN News - OSAMA BIN LADEN NEWS: Bin Laden Was 'Betrayed By One Of His Jealous Wives' Who Revealed Location Of His Secret Pakistan Compound 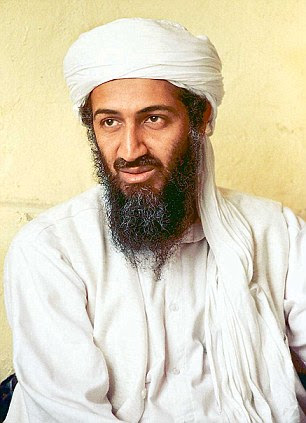 Betrayed: Osama Bin Laden may have been outed by one of his jealous wives, a retired Pakistani Brigadier has claimed
Osama Bin Laden was betrayed by one of his wives who revealed the location of his Pakistan hideaway because she was jealous of the Al-Qaeda leader's youngest spouse, it was claimed today.
Khairiah Saber, the oldest of his five wives, was motivated by revenge because the aging terrorist was 'bedding' Amal Ahmed Abdel-Fatah al-Sada while she slept in abedroom on the floor below, according to a Pakistani official.
Retired brigadier Shaukat Qadir, who has investigated the U.S. operation which killed Bin Laden in May last year, also controversially claims that Saber may have been working with Al-Qaeda itself.
He believes word that 'someone very important' was living in Abbottabad got out to the Taliban, Pakistan’s ISI military intelligence service and ultimately the CIA.
Qadir suggests that Al-Qaeda was looking to cash in on the $25m (£16m) bounty on his head. But he said he has no proof.
Pakistan claims it had not been warned about the raid, but Qadir's claims suggest elements in the intelligence service may have been aware. 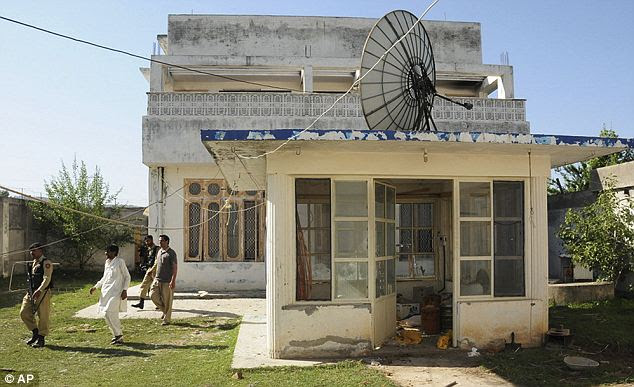 Marital discord: Jealously and suspicions between Bin Laden's wives began when his eldest spouse moved into the compound
According to the Sunday Times, it was also said that Bin Laden understood what was happening, but had lost the will to live.
Trouble arose when Saber, the mother of at least five of Bin Laden's sons, showed up at the compound in early 2011.
After 9/11, she spent years under house arrest in Iran until, after her release in 2008, she told Al-Qaeda she wanted to be rejoin her husband, according to Qadir.
He said: 'Nobody really understood why she should want to come back to him. They had lost contact, there was nothing going on between them — he was bedding only Amal.' 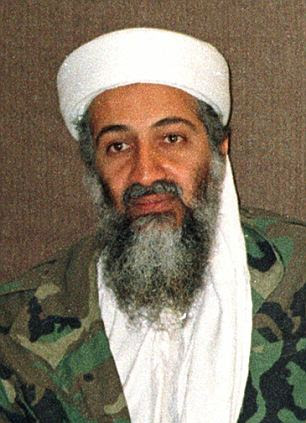 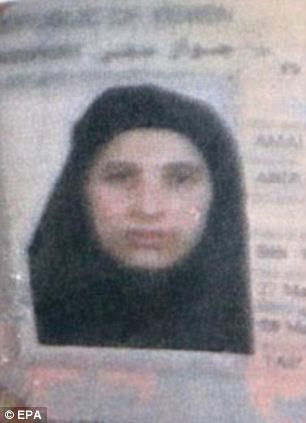 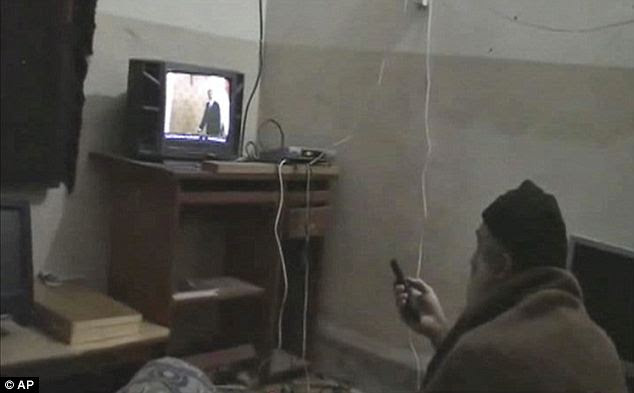 Revenge motive: The aging terrorist was bedding his youngest wife, while Khairiah Saber had to sleep in a bedroom on the floor below
The arrival of Saber, a well-educated Saudi in her 60s, was disruptive, particularly for Amal, Bin Laden’s fifth wife, Siham Sabar, and her 24-year-old son, Khalid.
Qadir said: 'In the house everyone is suspicious of her and Khalid questions her, saying, "Why the hell have you come back?"

Twenty-eight people lived within the Abbottabad compound in Pakistan.
Osama bin Laden lived with his three wives, eight of his children and five grandchildren.
He shared a room with his youngest and favourite wife, Amal Ahmed Abdel-Fatah as-Sada.
Another wife, Siham Saber, lived on the same floor as her husband.
His eldest wife, Khairiah Saber, arrived later and stirred up trouble living on the floor beneath the al-Qaeda leader.
Bin Laden had two wives previous to Khairiah who he divorced and twenty children between the women.
He doesn't believe Saber had any connection with the CIA, but her arrival in Abbottabad revealed to those hunting Bin Laden that he might be there. 'Who else could have led them there?'
His theories go against the U.S version of events which states that Bin Laden was tracked to his secret compound by following a 'courier' who was his contact with the terrorist organisation.
The picture of bin Laden's family life comes after Qadir was given rare access to transcripts of Pakistani intelligence's interrogation of Amal, who was detained in the raid.
Others in the family, crammed into the three-story villa Abbottabad compound where bin Laden would eventually be killed in a May 2 U.S. raid, were convinced that the eldest wife intended to betray the al-Qaeda leader.
Indeed, the compound where bin Laden lived since mid-2005 was a crowded place, with 28 residents — including bin Laden, his three wives, eight of his children and five of his grandchildren.
The bin Laden children ranged in age from his 24-year-old son Khaled, who was killed in the raid, to a three-year-old born during their time in Abbottabad.
Bin Laden's courier, the courier's brother and their wives and children also lived in the compound. 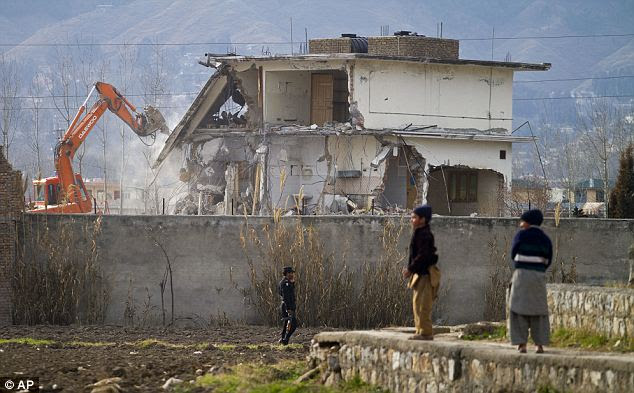 Crowded: 28 people lived in the recently destroyed Abbottabad compound with bin Laden including his three wives, eight children and five grandchildren
Bin Laden’s home life was stirred up when Khairiah joined the fray.
There was already bad blood between Khairiah, who married bin Laden in the late 1980s, and Amal because of bin Laden's favoritism for the younger Yemeni woman.
Even ISI officials who questioned Khairiah after the raid were daunted by her.
‘She is so aggressive that she borders on being intimidating,’ Qadir said he was told by an ISI interrogator.
Amal stayed close to bin Laden as he fled Afghanistan into Pakistan following the 2001 U.S. invasion.
She took an active role in arranging protection for him and bin Laden wanted her by his side, the tribal leaders told Qadir.
Khairiah fled Afghanistan in 2001 into Iran along with other bin Laden relatives and al-Qaeda figures.
She and others were held under house arrest in Iran until 2010, when Tehran let them leave in a swap for an Iranian diplomat kidnapped in Pakistan's frontier city of Peshawar.
Khairiah showed up at Abbottabad in February or March 2011 and moved into the villa's second floor, Amal told her interrogators.
Khalid, bin Laden's son with Siham, was suspicious, according to Amal's account. He repeatedly asked Khairiah why she had come.
At one point, she told him, ‘I have one final duty to perform for my husband.’ Khalid immediately told his father what she had said and warned that she intended to betray him. 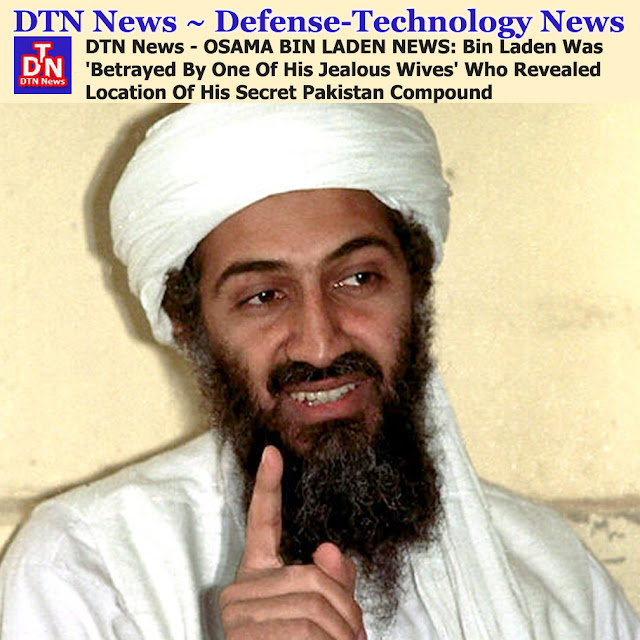 Amal, who shared Khalid's fears, said bin Laden was also suspicious but was unconcerned, acting as if fate would decide, according to Qadir's recounting of the interrogation transcript.
There is no evidence Khairiah had any role in bin Laden's end. Accounts by Pakistani and U.S. intelligence officials since the May 2 raid have made no mention of her.
Instead, U.S. officials have said the courier inadvertently led the CIA to the Abbottabad villa after they uncovered him in a monitored phone call.