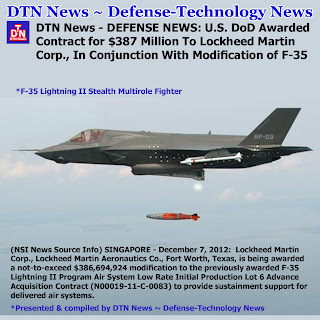 Work will be performed in Eglin Air Force Base, Orlando, Fla. (35 percent); Ft. Worth, Texas (25 percent); El Segundo, Calif. (8 percent); Warton, United Kingdom (5 percent); and various locations throughout the United States (27 percent); and is expected to be completed in October 2013.

Morsi was expected to deliver a televised address to the nation after five people were killed overnight in the worst violence since his June election, pitting Islamists against an opposition that has escalated protests since he assumed extensive powers on November 22. 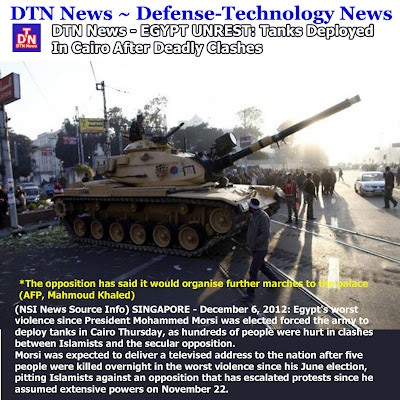 Running street battles outside the Itihadiya palace in northern Cairo also left 644 people wounded, many from birdshot, the health ministry reported.
By Thursday morning, the Republican Guard, the division tasked with protecting the presidency, deployed tanks outside the palace. A few hundred Morsi supporters remained outside the complex after the opposition left.
Republican Guard chief General Mohammed Zaki said the tanks were deployed to separate warring protesters, and pledged that the military "will not be an instrument of oppress
The opposition has said it would organise further marches to the palace as a top presidential aide accused them of coordinating with loyalists of deposed dictator Hosni Mubarak.
A senior presidential aide told AFP Morsi was expected to make a speech later in the day to reach out to the opposition. No time was announced for the address.
The stage was set for Wednesday's violence when Morsi's Muslim Brotherhood movement announced a march to the palace, where opposition protesters were staging a sit-in a day after tens of thousands surrounded the sprawling complex.
Protesters fired guns and threw firebombs and rocks at each other on Wednesday as their simmering stand-off over Morsi's expanded powers and a draft constitution turned violent.
Bloodied protesters were carried away as gunshots rang out and rival demonstrators torched cars and set off firecrackers near the palace, where Morsi opponents had put up tents before his supporters drove them away.
Riot police were eventually sent in, but clashes still took place in side streets near the palace in the upscale Heliopolis neighbourhood.
The opposition says it will not stand down until Morsi discards his new powers, which allow him to take decisions uncontested by the courts, and cancels a snap December 15 referendum on a new constitution opposed by liberals and Christians.
Early on Thursday, intermittent gunshots rang out amid sporadic violence, an AFP correspondent said, before the tanks took up position.
The overnight violence also spread beyond the capital, with protesters torching Muslim Brotherhood offices in the Mediterranean port city of Ismailiya and in Suez, witnesses said.
The Brotherhood urged protesters on both sides to withdraw, as did Prime Minister Hisham Qandil.
"It's a civil war that will burn all of us," said Ahmed Fahmy, 27, as clashes raged behind him.
"They (Islamists) attacked us, broke up our tents, and I was beaten up," said Eman Ahmed, 47. "They accused us of being traitors."
Activists among the Islamist marchers harassed television crews, trying to prevent them from working, AFP reporters said.
Wael Ali, a 40-year-old Morsi supporter, said: "I'm here to defend democracy. The president was elected by the ballot box."
The United States called for an open and "democratic dialogue" in Egypt.
"The upheaval we are seeing... indicates that dialogue is urgently needed. It needs to be two-way," US Secretary of State Hillary Clinton said in comments echoed by Britain and the European Union.
Despite the protests, Vice President Mahmud Mekki said a referendum on the charter "will go ahead on time" on December 15.
The opposition would be allowed to put any objections to articles in the draft constitution in writing, to be discussed by a parliament yet to be elected.
Prominent opposition leader and former UN nuclear watchdog chief Mohamed ElBaradei said Morsi bore "full responsibility" for the violence.
He said the opposition was ready for dialogue but would use "any means necessary" to scupper the charter, stressing, however, that they would be peaceful.
Meanwhile, four Morsi advisers resigned over the crisis, official news agency MENA reported. The head of state television also resigned in protest, the independent newspaper Al-Masry al-Youm reported on its website.