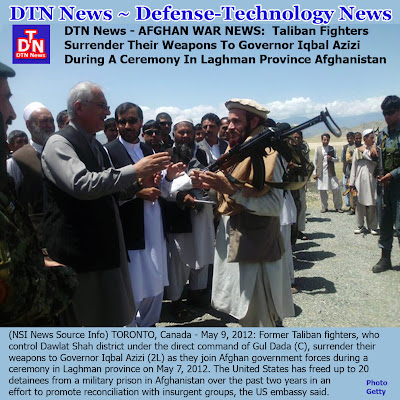 Gen. Stephane Abrial of the French air force told the Defense Writers Group the nations’ leaders also will deal with partnership capability, “smart defense” and other matters. Abrial is commander of NATO’s transformation command.“On partnership, there will be a reaffirmation that NATO does not operate in isolation,” the general said. The alliance is keen to work more closely with all kinds of partners from other nations to international institutions to no-governmental organizations, he added.
The NATO-led actions in Libya are an example of the alliance working with non-NATO partners, such as the United Arab Emirates and the Arab League. NATO also works with the European Union to ensure that the two institutions work together smoothly, when needed.How to work together with these disparate groups is part and parcel of the Allied Command Transformation mission, Abrial said.
On capabilities, the leaders will discuss the progress on decisions made at NATO’s 2010 summit in Lisbon, Portugal, including the smart defense initiative. Smart defense is about how the alliance will continue to develop and maintain the capabilities needed to fulfill its missions despite the new era of austerity.
Another initiative, “connected forces,” ensures that all forces can work well together. “The key word there is interoperability, and the three strands of that are training, exercises and technology,” Abrial said. “When I say capabilities, I don’t mean just a piece of equipment, but all aspects associated with it.”This includes doctrine, leadership, facilities and much more, he explained, and these will be discussed in Chicago.With a few exceptions, budgets across NATO are either steady or going down, the general said. “We expect this situation to be with us for quite a while … and therefore, it is very important we make the best possible use of every euro, dollar or pound that we get.”
The United States is reducing its defense budget, but there is no danger as yet that the U.S. military will not be able to operate across the full spectrum of operations, Abrial said. “This is not possible in Europe,” he added. “That is why when we look at smart defense, we look at ways to reduce the consequences of this austerity.”
Part of this is aligning national priorities with NATO needs. In other words, a nation may decide to specialize in detecting biohazards, for example. Since “Nation A” has this capability, “Nation B” does not have to develop it to the same extent. Both nations, therefore, save.
“Specialization does not mean we are going to say to anybody, ‘We must oblige you to do this and stop doing that,’” Abrial said. “We don’t have the mandate, authority or will to do that.
*Link for This article compiled by Roger Smith from reliable sources By Jim Garamone - American Forces Press Service*Speaking Image - Creation of DTN News ~ Defense Technology News *This article is being posted from Toronto, Canada By DTN News ~ Defense-Technology News Contact:dtnnews@ymail.com ©COPYRIGHT (C) DTN NEWS DEFENSE-TECHNOLOGY NEWS 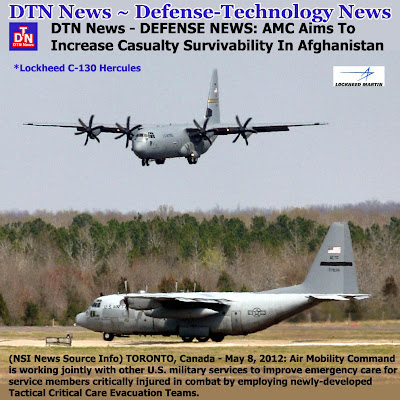 These are three-member teams, each comprised of a highly-trained emergency medicine physician and two certified registered nurse anesthetists or critical care nurses, now providing point-of-injury care and treatment during tactical evacuation of severely-injured troops in Afghanistan. Although only one such team is currently deployed to Afghanistan, more are expected to deploy in May.

AMC is the lead agency for military Aeromedical Evacuation worldwide. Within U.S. Central Command, AE missions are normally flown by air mobility aircrews and medical teams aboard C-17, KC-135, or C-130 aircraft, although essentially any AMC aircraft can be configured for these missions. AE crews have successfully completed more than 186,000 patient movements since the onset of Operations Iraqi Freedom and Enduring Freedom.

Over time, a combination of highly effective body armor, first-responder Tactical Combat Casualty Care/Self-Aid and Buddy Care, rapid casualty evacuation from the battlefield, a highly-integrated trauma system of forward surgical teams and theater hospitals, timely AE and Critical Care Air Transport have resulted in the highest casualty survival rate in the history of modern warfare. In fact, U.S. casualties have a 95 percent chance of survival once they enter the theater medical system, according to Joint Theater Trauma Registry data.

The need for tactical critical care evacuation is driven by casualty data that indicates many deaths are occurring from severe yet potentially "survivable" injuries in the pre-hospital environment. Feedback from the field also indicates severely-traumatized, post-surgical and resuscitative-care patients frequently require treatment exceeding the capability of flight medics who typically provide medical care during intra-theater patient movement. In August 2011, the Defense Health Board tasked all services to develop and implement solutions to close the critical care gap during all phases of en route casualty care starting from the point of injury. Specialized, highly-trained Tactical Critical Care Evacuation Teams are a solution.

Iddins said feedback from redeploying teams and other services will be the key to developing collaborative, joint solutions to tactical critical care patient evacuation. He said AMC will refine the TCCET concept as lives are saved and teams return with recommendations on how best to train members and integrate TCCETs into the en route care system.

"We will continue to gather data to determine the most effective team composition and methods," said Iddins. "Lessons learned from redeploying TCCETs are being used to improve training and equipment development as well as to finalize the overall concept of operations and related tactics, techniques and procedures."

Source: DTN News - - This article compiled by Roger Smith from reliable sources RT(NSI News Source Info) TORONTO, Canada - May 8, 2012: The unmanned aerial vehicle industry is expected to bring in billions for domestic drone makers over the next few years. Where are the robotic aircraft manufacturers sending their stealth spy plans though? They aren’t saying. 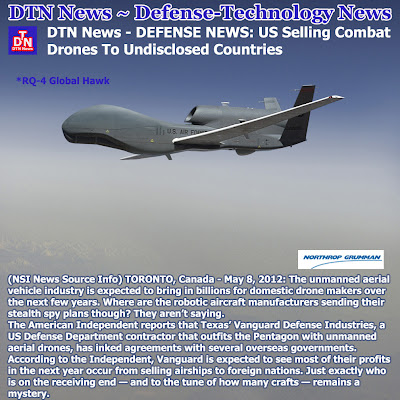 The American Independent reports that Texas’ Vanguard Defense Industries, a US Defense Department contractor that outfits the Pentagon with unmanned aerial drones, has inked agreements with several overseas governments. According to the Independent, Vanguard is expected to see most of their profits in the next year occur from selling airships to foreign nations. Just exactly who is on the receiving end — and to the tune of how many crafts — remains a mystery.“I thought it was going to be a brutal process,” Vanguard CEO Michael Buscher explains to The Independent in discussing how his company went about gaining US State Department approval. He says that he imagined the procedure to outfit foreign nations with the controversial aircraft would be difficult, but was surprised to see how easy it was to have Uncle Sam authorize his company to deal the drones overseas.“It was well orchestrated and extremely thorough. But when you follow their guidelines and provide copious details, the process is not as burdensome as I would have thought,” says Buscher.Not only does an easy process mean easy income for Buscher and Vanguard — it also means that the foreign entities seeking spy planes and other drone crafts can come into possession of them much easier.“It is just the beginning of it,” activist and author Medea Benjamin tells the Independent, adding that the distribution of drones across the world is “horrifying.”

“There is so much power these companies have with government agencies, and this places extremely powerful pressure on the executive and on the Congress. We are at a very dangerous stage because the American people know so little about the use of drones by our government, much less about these sales overseas,” adds Benjamin.

More would be known about those international drone deals, of course, if the defense contractors were obliged to identify their customers. Since they are not, however, Vanguard’s roster of regimes that depend on their drones are unknown, calling some skeptics to question if the US is indirectly assisting in foreign governments that use unmanned crafts to spy on its citizens—or perhaps even more. Although Vanguard manufactures drone planes used in surveillance missions, they have also been linked to producing stealth crafts that are fitted with firearms and high-tech weaponry.
Last year, the Anonymous hacktivist offshoot LulzSec hacked the servers of Vanguard, revealing private correspondence containing businesses deals between the Texas-based DoD contractors and overseas entities.
“Vanguard Defense Industries manufactures unmanned ShadowHawk drones which cost $640,000 and are equipped with grenade launchers and shotguns,” reads a statement that accompanied last year’s LulzSec hack. “ShadowHawks are currently in use by law enforcement, military and private corporations
deploying them in the US, the Horn of Africa, Panama, Columbia, and US-Mexico border patrol operations.”
Lulzsec described the emails as containing “contracts, schematics, non-disclosure agreements, and more” and warned the defense industry that they would need to be on the offensive if they wish to prevent future hacks. Months later, however, Vanguard is still filling international orders and expected to do so for the unforeseeable future.
The Independent quotes Vanguard as expected to accumulate upwards of $40 million during the next year by selling drones domestically — in the end, however, they estimate that the majority of their deal will be done with foreign countries.

Source: DTN News - - This article compiled by Roger Smith from reliable sources EADS(NSI News Source Info) TORONTO, Canada - May 8, 2012: Airbus Military has received the initial type certification for the A400M new generation airlifter, marking a key milestone on the road to first delivery around the turn of the year. This first approval, known as a Restricted Type Certificate (RTC), was presented by European Aviation Safety Agency (EASA) Executive Director Patrick Goudou at an internal ceremony today in Toulouse, France. 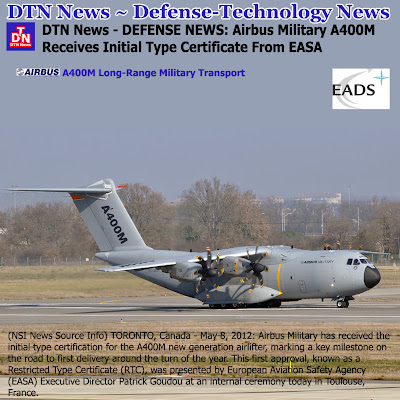 The RTC is a critical step towards the award of full civil type certification which is expected in mid-2012 following the completion of 300 hours of function and reliability (F&R) flight tests, and towards military Initial Operating Clearance later in the year.As part of the flight-test activity the A400M has recently visited countries in Latin America and South East Asia, and in the upcoming period will travel to the “home” nations that ordered the aircraft and the Middle East in the frame of the F&R tests.
The fleet of five A400M development aircraft continues to make good progress in the intense flight-test campaign in order to ensure delivery of a reliable aircraft to our customer and has now completed more than 3,100 hours in the air, despite continued engine challenges.Cedric Gautier, Airbus Military Head of A400M programme, said: “Achieving civil and military certification of the A400M as foreseen in the programme is an immensely challenging task, but the process of working on both simultaneously provides important benefits for our customers in the future. It is deeply satisfying to receive this initial certification, confirming the good progress that has been made towards the delivery of the first aircraft.”About A400MThe A400M is an all-new military airlifter designed to meet the needs of the world's armed forces in the 21st Century. Thanks to its most advanced technologies, it is able to fly higher, faster and further, while retaining high manoeuvrability, low speed, and short, soft and rough airfield capabilities. It combines both tactical and strategic/logistic missions. With its cargo hold specifically designed to carry the outsize equipment needed today for both military and humanitarian disaster relief missions, it can bring this material quickly and directly to where it is most needed. Conceived to be highly reliable, dependable, and with great survivability, the multipurpose A400M can do more with less, implying smaller fleets and less investment from the operator. The A400M is the most cost efficient and versatile airlifter ever conceived and absolutely unique in its capabilities.