Source: DTN News - - This article compiled by Roger Smith from reliable sources SAIC
(NSI News Source Info) MCLEAN, Va., - January 22, 2011: Science Applications International Corporation (SAIC) (NYSE:SAI - News) announced yesterday it will continue to lead a team pursuing the U.S. Army's Ground Combat Vehicle (GCV) program. The SAIC-led team submitted a revised proposal for the technology development phase of the Infantry Fighting Vehicle (IFV) being developed under the GCV effort to the U.S. government. The team originally submitted a proposal in May 2010, but the initial Request for Proposal was rescinded by the Army, and a second RFP issued inNovember 2010. 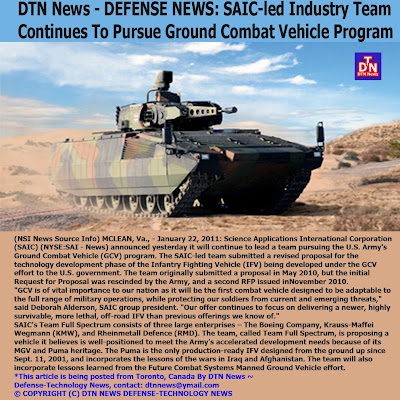 "GCV is of vital importance to our nation as it will be the first combat vehicle designed to be adaptable to the full range of military operations, while protecting our soldiers from current and emerging threats," said Deborah Alderson, SAIC group president. "Our offer continues to focus on delivering a newer, highly survivable, more lethal, off-road IFV than previous offerings we know of."

SAIC's Team Full Spectrum consists of three large enterprises – The Boeing Company, Krauss-Maffei Wegmann (KMW), and Rheinmetall Defence (RMD). The team, called Team Full Spectrum, is proposing a vehicle it believes is well-positioned to meet the Army's accelerated development needs because of its MGV and Puma heritage. The Puma is the only production-ready IFV designed from the ground up since Sept. 11, 2001, and incorporates the lessons of the wars in Iraq and Afghanistan. The team will also incorporate lessons learned from the Future Combat Systems Manned Ground Vehicle effort.

"Our offering is designed, first and foremost, to protect our Soldiers, to unburden them from mechanical tasks with the latest technology thus allowing concentration on the cognitive, and to empower them to accomplish their mission," said Alderson. "In addition, high technical readiness levels will help meet the Army's timeline of delivering the first vehicle in 7 years."

The U.S. Army's Ground Combat Vehicle program is part of a holistic Army plan to modernize its combat vehicle fleet.

SAIC is a FORTUNE 500® scientific, engineering, and technology applications company that uses its deep domain knowledge to solve problems of vital importance to the nation and the world, in national security, energy and the environment, critical infrastructure, and health. The company's approximately 45,000 employees serve customers in the U.S. Department of Defense, the intelligence community, the U.S. Department of Homeland Security, other U.S. Government civil agencies and selected commercial markets. Headquartered in McLean, Va., SAIC had annual revenues of $10.8 billion for its fiscal year ended January 31, 2010. For more information, visit www.saic.com. SAIC: From Science to Solutions®

Statements in this announcement, other than historical data and information, constitute forward-looking statements that involve risks and uncertainties. A number of factors could cause our actual results, performance, achievements, or industry results to be very different from the results, performance, or achievements expressed or implied by such forward-looking statements. Some of these factors include, but are not limited to, the risk factors set forth in SAIC's Annual Report on Form 10-K for the period ended January 31, 2010, and other such filings that SAIC makes with the SEC from time to time. Due to such uncertainties and risks, readers are cautioned not to place undue reliance on such forward-looking statements, which speak only as of the date hereof. 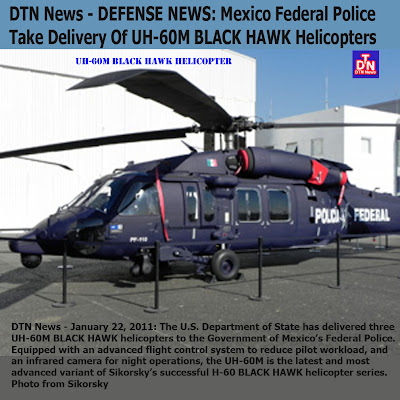 Introduced into service with the U.S. Army in 2006, the UH-60M is the latest and most advanced variant of Sikorsky’s successful H-60 BLACK HAWK helicopter series. The U.S. Army took delivery of its 200th ‘M’ model in mid 2010, which comes equipped with an advanced flight control system to reduce pilot workload, and an infrared camera for night operations.

“Use of the forward looking IR sensor, and this BLACK HAWK helicopter’s superior lift range and speed will further enhance the capabilities of the Federal Police to perform their very important law enforcement mission,” said David L. Powell, Sikorsky Vice President of Sales for the Americas.

At a Mexico City reception to recognize delivery of the UH-60M helicopters, Sergei Sikorsky, son of Igor Sikorsky, who designed the first viable helicopter in the 1930s, remarked that helicopter operations in Mexico had lived up to his father’s ardent desire that rotary wing aircraft be deployed for humanitarian purposes.

In the summer of 1945, his father accompanied a 1945 scientific expedition to photograph the interior of Mexico’s erupting Parícutin volcano. The U.S. Army Air Corps and the Government of Mexico arranged for a Sikorsky R-6A helicopter to fly above the crater to help scientists observe the volcano’s interior during more than 100 flights at altitudes as high as 8,000 feet. It is believed the flights were the first ever by a helicopter in Mexico, and the first to conduct scientific observations of an active volcano.

Then in early October 1955, helicopters were again deployed to Mexico, this time by the U.S. Marine Corps from aboard the light aircraft carrier USS Saipan. Their mission: to evacuate thousands of Yucatan residents stranded by flooding caused by Hurricane Janet.

“The thousands of trapped residents whose lives were saved by the biggest helicopter rescue operation of its time was a great source of pride and pleasure to my father,” said Sergei. “I am proud to recognize the excellent work of the Mexico Federal Police to use Sikorsky helicopters for law enforcement.”

Sikorsky Aircraft Corp., based in Stratford, Conn., is a world leader in aircraft design, manufacture and service. United Technologies Corp., based in Hartford, Conn., provides a broad range of high-technology products and support services to the aerospace and building systems industries.