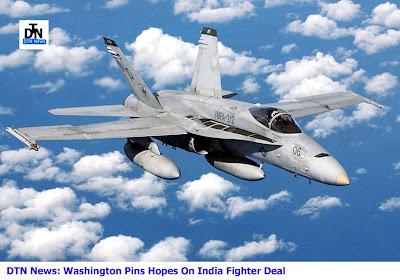 Source: DTN News - - This article compiled by Roger Smith from reliable sources including By Edward Luce in Washington and James Lamont in New Delhi - FT.com
(NSI News Source Info) HONG KONG - October 3, 2010: The US administration is stepping up pressure on India to buy US military hardware five weeks ahead of Barack Obama’s first state visit to India.

Hillary Clinton, US secretary of state, and Robert Gates, the defence secretary, have pressed AK Antony, the Indian defence minister who is on a two-day visit to Washington, to opt for US bids to supply more than 100 multi-combat fighter aircraft to India. The project – worth up to $11bn – is the world’s largest pending military hardware deal.

“We think we have the finest military hardware in the world, and if India is upgrading its defence capabilities, they should buy American,” PJ Crowley, a state department spokesman, said following Mr Antony’s meeting with Mrs Clinton. “Our understanding is that some of those decisions are coming up fairly soon.”Lockheed Martin and Boeing are among six foreign companies that India is evaluating, and winning the work would create or save thousands of US jobs.

The selection of one of the US fighter jet bids would help cement a growing alignment of two of the world’s largest democracies, a political bond that Mr Obama will stress heavily on his visit.

US officials say privately it would also take the sting out of the recent Indian nuclear liability law, which would make suppliers, as well as operators, liable for any accidents at Indian civil nuclear plants.

One of the main selling points of the controversial 2008 US-India civil nuclear agreement, concluded by George W. Bush’s administration but upheld by Mr Obama, was that it would create a huge flow of business for US companies in India’s planned civil nuclear expansion. The deal gave India access to civil nuclear technology and material without requiring it to renounce its nuclear weapons or join the non-proliferation treaty. But the passage last month of India’s nuclear liability law, which US companies describe as draconian, has put paid to such hopes.

Washington’s hopes of achieving a big commercial “deliverable” from next month’s presidential visit are now pinned on the fighter jet deal. There is also hope that India might conclude a deal to buy 10 C-17 transport aircraft from Boeing in time for the state visit as part of a package worth as much as $3.5bn.

Indian defence analysts say the world’s largest democracy faces a choice of turning more to the US for sophisticated defence equipment or maintaining supplies from Russia, its traditional defence partner, whose maintenance and spare-parts support has weakened since the collapse of the Soviet Union. New C-17s would replace an ageing fleet of Russian Ilyushins. Likewise, any new fighters would replace Sukhoi and Mig jets.

New Delhi, however, wants the US to ease technology controls on its defence exports to give it access to more advanced technology. It also seeks assurances from Washington that US military support for arch-rival Pakistan in the fight against Islamist militants cannot be used against India.

“There is a great deal of focus in Washington on achieving commercial results to announce during the Obama visit,” said Tezi Schaffer, a south Asia expert at the Center for International Strategic Studies in Washington. “But the more important aspect to the trip may be in the quieter conversations about strengthening the India-US strategic relationship.”

US officials have been struggling to come up with initiatives that would cement ties with India in the knowledge that nothing could emulate the drama of the Bush administration’s nuclear agreement, which brought India’s nuclear programme out of international isolation. US officials are also aware of lingering Indian sensitivities about the Obama administration’s initial overtures to China at a time of growing friction between Delhi and Beijing.

Mr Antony, the latest of many senior Indian officials to visit Washington, reiterated demands for the US to drop Indian companies from its “entity list” requiring approval to import US technology.

The US could also back India’s aspirations to become a permanent member of the UN Security Council. However, there are divisions within the administration on how far Washington should go.

“There is a camp within the administration, particularly at the state department, that understands India’s huge geostrategic importance to America, and there is a camp that is much more sceptical and wants first to see the pay-off to the nuclear deal,” said a senior India lobbyist.