Source: DTN News - - This article compiled by Roger Smith from reliable sources ByStephenManual (NSI News Source Info) TORONTO, Canada - May 30, 2012: NATO claims that it has killed al-Qaeda second in command in an airstrike inside Afghanistan near the Pakistani border. According to NATO, Saudi-born al-Qaeda leader Sakhr al-Taifi was killed on Sunday in the Kunar province of Afghanistan bordering Pakistan. 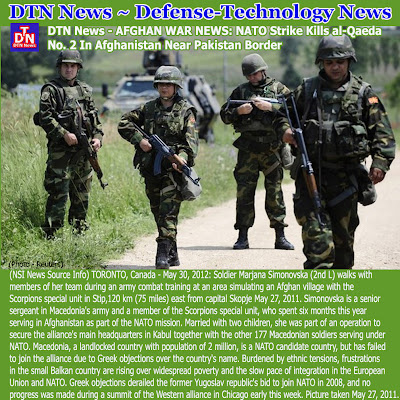 It is believed that al-Taifi frequently used to travel to Pakistan and was involve in attacks on NATO troops based in Afghanistan. It is also believed that the terror kingpin would take commands from senior al-Qaeda leadership based in the tribal region of Pakistan. The semi-autonomous tribal region of Pakistan has been a hub of training camps and safe haven of terrorists for quite a long time now.NATO officials believe that the slain terrorist had been funding and supporting terrorists based in Afghanistan to carry out attacks on the NATO troops besides giving them commands on what to do and what not.
The officials have termed the killing of the terrorist a big success, as they believe that the backbone of the militants based in Afghanistan and the tribal region of Pakistan has been broken. Some of them even say that the killing is the second biggest victory of the NATO troops after the killing of Osama Bin Laden.
Bin Laden was shot dead in a sting operation by a team of the US Navy Seals in Abbottabad in May last year. The incident strained relations between the United States and Pakistan due to the unilateral action of the Seals. Since the US invasion in Afghanistan back in October 2001, dozens of potential terrorists and militants have been killed by the US-led coalition forces based in Afghanistan.
It is widely held that dozens of high profile terrorists fled to the tribal region of Pakistan following the US invasion in Afghanistan and they are still living there. Despite repeated requests and pressure by the United States, Pakistan army has remained unmoved and reluctant to carry out a full-fledged military operation against militants based in the tribal region.
Analysts and observers based here in the United States believe that Pakistan’s security agencies, including Inter Services Intelligence (ISI), deem the terrorists their strategic asset and that’s why they do not launch operation against them.
The most dreaded Haqqani network is also based in North Waziristan agency of Pakistan and is believed to be involved in attacks on NATO troops and other military installations in Afghanistan. The US has been carrying out drone strikes against the potential militants based in the region following credible intelligence information from their sources on the ground.
As the US plans to withdraw its troops from Afghanistan at the end of 2014, it is a welcome sign that top leadership of al-Qaeda is being targeted and eliminated. The US and its allies should also consider negotiating with terrorists willing to lay down arms and become civilized citizens.
StephenManual is based in New York City, New York, United States of America, and is a Reporter for Allvoices.
*Link for This article compiled by Roger Smith from reliable sources By StephenManual *Speaking Image - Creation of DTN News ~ Defense Technology News *This article is being posted from Toronto, Canada By DTN News ~ Defense-Technology News Contact:dtnnews@ymail.com ©COPYRIGHT (C) DTN NEWS DEFENSE-TECHNOLOGY NEWS