The Boeing Co. of Seattle, Washington, was awarded a fixed price incentive firm contract valued at over $3.5 billion for the KC-X Engineering and Manufacturing Development which will deliver 18 aircraft by 2017. Aeronautical Systems Center (ASC/WKK), Wright Patterson Air Force Base, Ohio, is the contracting activity (FA8625-11-C600). 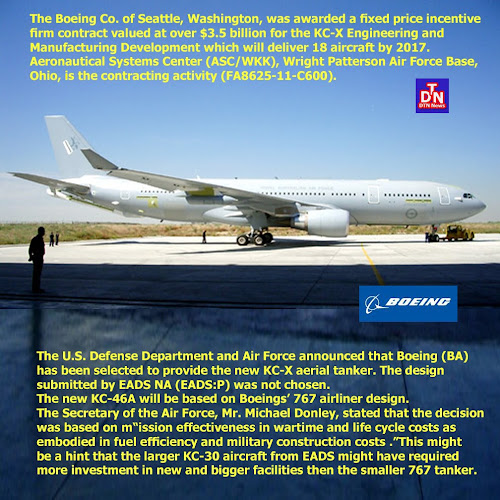 Kearfott Corp., Black Mountain, N.C., is being awarded a maximum $21,655,875 firm-fixed-price contract for servo, roll trim. There are no other locations of performance. Using service is Army. There were originally four proposals solicited with two responses. The date of performance completion is Feb. 22, 2016. The Defense Logistics Agency Aviation, Redstone Arsenal, Ala., is the contracting activity (SPRRA1-11-D-0055). 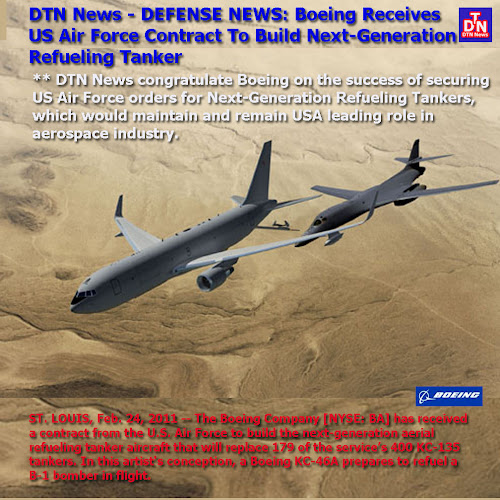 The contract calls for Boeing to design, develop, manufacture and deliver 18 initial combat-ready tankers by 2017.

"We're honored to be given the opportunity to build the Air Force's next tanker and provide a vital capability to the men and women of our armed forces," said Jim McNerney, Boeing chairman, president and CEO. "Our team is ready now to apply our 60 years of tanker experience to develop and build an airplane that will serve the nation for decades to come."

In selecting the Boeing NewGen Tanker after a lengthy and rigorous proposal process, the Air Force has chosen an American-built, multi-mission tanker that is based on the proven Boeing 767 commercial airplane and meets all requirements at the lowest risk for the warfighter and the best value for taxpayers. The Boeing proposal was created by an integrated "One Boeing" team from various sites across the company, including employees from the Commercial Airplanes; Defense, Space & Security; and Engineering, Operations & Technology organizations.

"This contract award would not have been possible without the hundreds of Boeing employees across the entire company, and the thousands of our industry teammates, who remained laser-focused on our commitment to offer a solution that is first in capability and best in value,” said Dennis Muilenburg, president and CEO of Boeing Defense, Space & Security. "This award is also a tribute to the Air Force and Defense Department officials who worked so tirelessly to make this procurement process fair, ultimately resulting in the selection of the right plane for the mission. We look forward to working with our Air Force customer to deliver this much needed capability to the servicemen and women we are honored to serve."

The KC-46A tankers will be built using a low-risk approach to manufacturing by a trained and experienced U.S. work force at existing Boeing facilities. The KC-46A tanker also will fuel the economy as it supports approximately 50,000 total U.S. jobs with Boeing and more than 800 suppliers in more than 40 states.

"Boeing has always been committed to the integrity of the competitive process, and the men and women across our Boeing commercial and defense teams and our entire supplier network are ready to extend that commitment to delivering these tankers on time and on budget," said Jim Albaugh, president and CEO of Boeing Commercial Airplanes.

Based on the proven Boeing 767 commercial airplane, the KC-46A Tanker is a widebody, multi-mission aircraft updated with the latest and most advanced technology and capable of meeting or exceeding the Air Force's needs for transport of fuel, cargo, passengers and patients. It includes state-of-the-art systems to meet the demanding mission requirements of the future, including a digital flight deck featuring Boeing 787 Dreamliner electronic displays and a flight control design philosophy that places aircrews in command rather than allowing computer software to limit combat maneuverability. The NewGen Tanker also features an advanced KC-10 boom with an expanded refueling envelope, increased fuel offload rate and fly-by-wire control system.

To learn more about the KC-46A Tanker, visit www.UnitedStatesTanker.com. 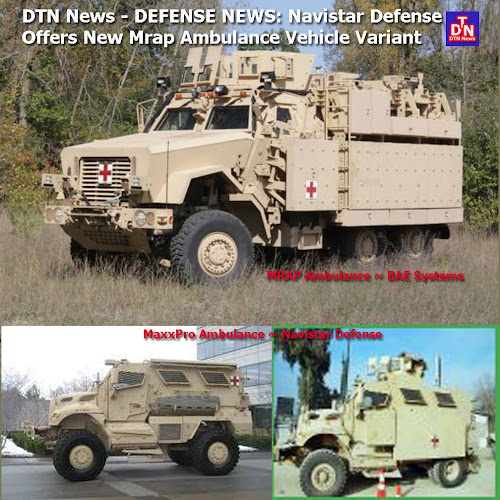 “Our warfighters are challenged to complete a variety of missions and survivability continues to be key,” said Archie Massicotte, president, Navistar Defense. “After fielding nearly 8,000 MaxxPro vehicles, we are proud to make the Dash ambulance available to help support the ongoing critical need for MRAP vehicles.” The Dash Ambulance includes an easy-to-use litter assist system as well as a protected work space benefitting medics and patients. This solution, paired with the company’s DXM™ independent suspension, helps medical aid navigate rough terrain to get where it is needed.
In addition to new vehicles, Navistar offers a MaxxPro ambulance kit, which can be installed into existing MaxxPro vehicles including the MaxxPro Base, Plus and Dash variants. As one of the leading providers of MRAP vehicles, Navistar is committed to expanding its family of vehicles to serve multiple mission types. The company also continually develops vehicle enhancements. One of these enhancements, the DXM independent suspension, is currently being retrofitted onto existing MaxxPro vehicles.
*
Link to....
This article compiled by Roger Smith from reliable sources DefPro
*Speaking Image - Creation of DTN News ~ Defense Technology News
*This article is being posted from Toronto, Canada By DTN News ~ Defense-Technology News
Contact:
dtnnews@ymail.com 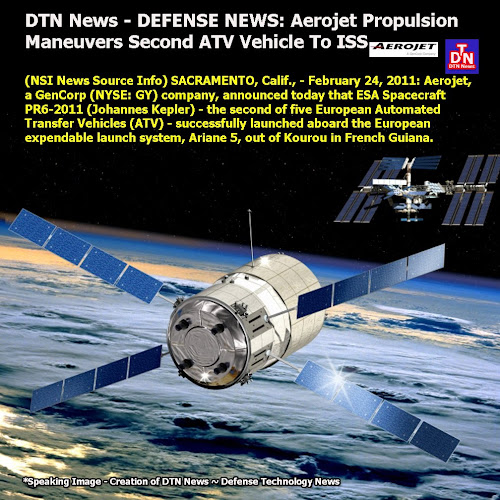 For the ATV mission, Aerojet delivered four model R-4D-11 110 lbf bipropellant rocket engines that are used to accomplish the circularization maneuvers and approach to docking with the International Space Station (ISS). When preliminary orbit was achieved, the ATV engines operated to place the spacecraft into an elliptical orbit after which a second firing was used to circularize the vehicle's orbit. Once in circular orbit, the ATV uses the model R-4D engines to provide the main propulsion and braking in its approach to the ISS. At the completion of the mission, the R-4D main engines will again be used for the de-orbit maneuver.

"Aerojet is pleased to support EADS Astrium and ESA in the ATV program," said Carl Stechman, chief bipropellant engineer and Apollo-era veteran. "The successful launch of the Johannes Kepler transfer vehicle is critical to maintaining the viability of the ISS after the space shuttle retires."

Aerojet's model R-4D 100 lbf force class bipropellant main engines are a derivative of the 32 engines flown on the Apollo lunar and service module. They are used for achieving orbit on many geosynchronous satellites and also will be used on the next-generation Orion Service Module. The four model R-4D engines were delivered to the prime contractor, EADS Astrium in Bremen, Germany, for use on the Johannes Kepler ATV.

Aerojet is a world-recognized aerospace and defense leader principally serving the missile and space propulsion, defense and armaments markets. GenCorp is a leading technology-based manufacturer of aerospace and defense products and systems with a real estate segment that includes activities related to the entitlement, sale, and leasing of the company's excess real estate assets. Additional information about Aerojet and GenCorp can be obtained by visiting the companies' websites at http://www.Aerojet.com and http://www.GenCorp.com.

Lockheed Martin (NYSE:LMT - News) has successfully delivered the 300th Common Cockpit, the nerve center for every multi-mission helicopter in the U.S. Navy fleet, aboard an MH-60S. 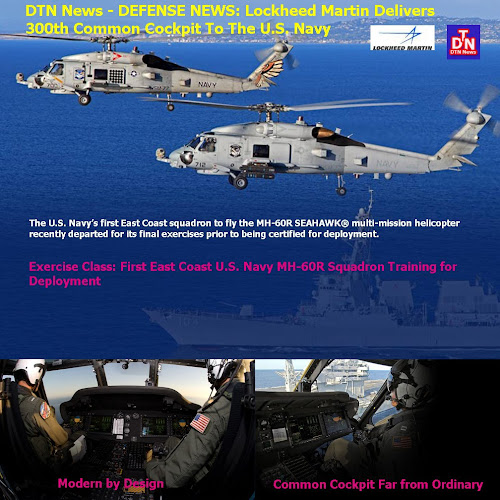 "The Common Cockpit underwent one of the most demanding certification processes at NAVAIR, and is now the standard by which all cockpits are judged," said Capt. Dean Peters, NAVAIR program manager for H-60 Multi-Mission Helicopters. "Our MH-60R and MH-60S crews rely on this system to support the broad range of missions and operations they fly every day."

The Common Cockpit is the hub of all activity aboard MH-60R and MH-60S aircraft. Four large, flat-panel, multi-function, night-vision-compatible, color display screens provide the crew with instant information on everything from weather to weapons and sensors.

Upcoming improvements to the Common Cockpit will include the addition of the Situational Awareness Technology Insertion (SATI) package, which is a set of upgrades to the flight management system. A new integrated digital map will provide pilots with a clear picture of their operating area, and an upgrade to the Identification Friend-or-Foe system will ensure there is no interference during transmission and that it is interoperable with the Federal Aviation Administration and other agencies.