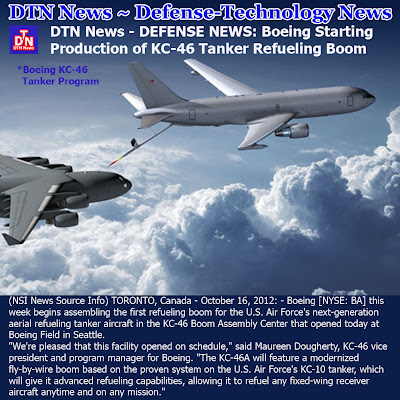 "We're pleased that this facility opened on schedule," said Maureen Dougherty, KC-46 vice president and program manager for Boeing. "The KC-46A will feature a modernized fly-by-wire boom based on the proven system on the U.S. Air Force's KC-10 tanker, which will give it advanced refueling capabilities, allowing it to refuel any fixed-wing receiver aircraft anytime and on any mission."

Boom assembly marks the program's shift to production from design activities.
"It's a big day for the KC-46 Tanker Program and the U.S. Air Force," said Maj. Gen. John Thompson, U.S. Air Force Tanker Program Executive Officer and KC-46 Program Director. "Boeing continues to make good progress toward delivering the KC-46 Tanker on schedule."
The first boom will enter testing during the third quarter of 2013 at a System Integration Lab (SIL), known as SIL 0. It is one of five labs designed to reduce risk for avionics and aerial refueling integration. Boeing invented the air refueling boom and has been building, upgrading and modifying them for more than 60 years.
Boeing's KC-46 program remains on track to deliver 18 combat-ready tankers by 2017, and for the next major Air Force contract milestone, the Critical Design Review, scheduled for the summer of 2013.
Production of the KC-46 aircraft begins next summer in Boeing's Everett, Wash., factory. The aircraft will be a 767-2C variant of the commercial 767-200ER airplane. Boeing will build 179 next-generation aerial refueling tanker aircraft to begin replacing the Air Force's aging KC-135 tankers.
A unit of The Boeing Company, Boeing Defense, Space & Security is one of the world's largest defense, space and security businesses specializing in innovative and capabilities-driven customer solutions, and the world's largest and most versatile manufacturer of military aircraft. Headquartered in St. Louis, Boeing Defense, Space & Security is a $32 billion business with 61,000 employees worldwide. Follow us on Twitter: @BoeingDefense.
Contact:
Jerry Drelling
KC-46 Tanker Program
Office: 425-266-4924
Mobile: 714-318-7594
jerry.a.drelling@boeing.com
*Link for This article compiled by Roger Smith from reliable sources Boeing
*Speaking Image - Creation of DTN News ~ Defense Technology News
*This article is being posted from Toronto, Canada By DTN News ~ Defense-Technology News Contact:dtnnews@ymail.com
©COPYRIGHT (C) DTN NEWS DEFENSE-TECHNOLOGY NEWS 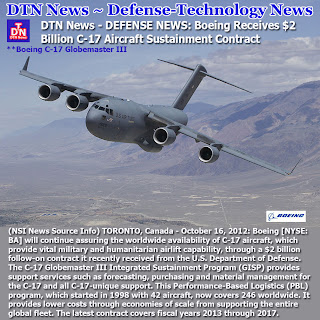 The C-17 Globemaster III Integrated Sustainment Program (GISP) provides support services such as forecasting, purchasing and material management for the C-17 and all C-17-unique support. This Performance-Based Logistics (PBL) program, which started in 1998 with 42 aircraft, now covers 246 worldwide. It provides lower costs through economies of scale from supporting the entire global fleet. The latest contract covers fiscal years 2013 through 2017.

Under a PBL arrangement, a customer receives an agreed-to level of system readiness, as opposed to a traditional contract for specific spare parts and support services. This integrated logistics approach -- in which Boeing manages U.S. assets as a designated Inventory Control Point -- has allowed Boeing to apply innovative spares forecasting and modeling tools to maximize aircraft availability while lowering costs. In many cases, Boeing has provided readiness levels beyond those spelled out in the agreements.

The Department of Defense recently recognized the U.S. Air Force-Boeing GISP team with the 2012 Secretary of Defense "system-level" PBL Award.

"This contract award and the recognition from the secretary of defense are testaments to the long-standing partnership between the U.S. Air Force and Boeing," said Gus Urzua, Boeing vice president and GISP program manager.

A unit of The Boeing Company, Boeing Defense, Space & Security is one of the world's largest defense, space and security businesses specializing in innovative and capabilities-driven customer solutions, and the world's largest and most versatile manufacturer of military aircraft. Headquartered in St. Louis, Boeing Defense, Space & Security is a $32 billion business with 61,000 employees worldwide. Follow us on Twitter: @BoeingDefense. 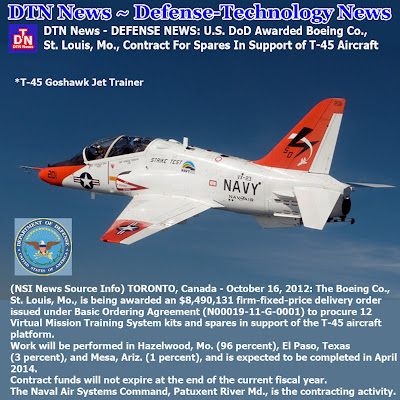 Contract funds will not expire at the end of the current fiscal year.


In 1978, McDonnell Douglas and British Aerospace developed the T-45A Goshawk, a carrier-suitable version of the British Aerospace Hawk. The first Hawk, which flew Aug. 21, 1974, was established as the Royal Air Force principal jet trainer and served the U.S. and European air forces.

The U.S. Navy ordered more than 125 T-45A Goshawks, intending to use them to replace the TA-4J Skyhawk in the Advanced Jet Training Program and the T-2 Buckeye in the Intermediate Jet Pilot Training Program.

The T-45 Training System (T45TS) combines academic, simulation and flight phases into an integrated computer-based training approach that greatly improves training efficiency and safety. The two-seat, single-engine T-45 Goshawk aircraft trainer is at the heart of the T45TS, the first totally integrated training system developed for the Navy.

The T-45C, with a digital cockpit that is more representative of current tactical fighter configurations, made its first flight in October 1997. Boeing has delivered more than 165 Goshawks to the Navy, and more than 2,300 new aviators have earned their wings in the T-45. At least 234 Goshawks were slated to be produced for Navy and Marine Corps training beyond 2030.