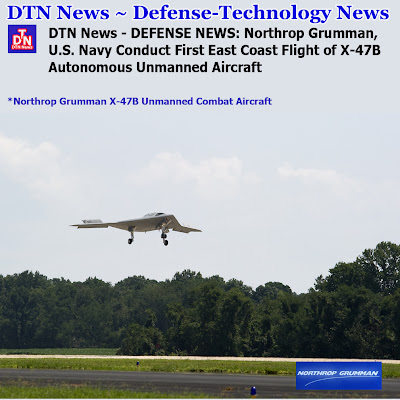 The 36-minute flight – the first for the tailless, strike-fighter-sized aircraft since it was transported to the Navy base in June from Edwards Air Force Base, Calif. – was successfully completed on July 29 at 11:36 a.m. Eastern time. It marks the first time a tactical unmanned aircraft has been fully integrated into the air traffic patterns and the command and control structure of the Pax River flight test complex.

"This flight of the X-47B is the first time an autonomous, carrier-capable unmanned system has flown at Pax River," said Carl Johnson, vice president and Navy UCAS program manager for Northrop Grumman. "It's also a major milestone for the program as the Navy/Northrop Grumman team prepares the aircraft to enter carrier suitability testing this fall, the last major phase of testing before we begin carrier trials in 2013."

Northrop Grumman is the Navy's prime contractor for the Navy's UCAS Carrier Demonstration (UCAS-D) program. The company designed and built two X-47B demonstrator aircraft for the program, which is managed by Naval Air Systems Command (NAVAIR).

During the flight, which comprised two precision racetrack patterns over the Chesapeake Bay, the aircraft reached a maximum altitude of 7,500 feet and a maximum air speed of 180 knots.

"This flight makes two critical points for the Northrop Grumman/Navy Integrated Test Team," said Daryl Martis, Northrop Grumman's X-47B test director. "It validates the performance of the aircraft demonstrated during its initial flight testing at Edwards, and it proves that we've successfully implemented the command and control structure required to operate the X-47B safely from Pax River." 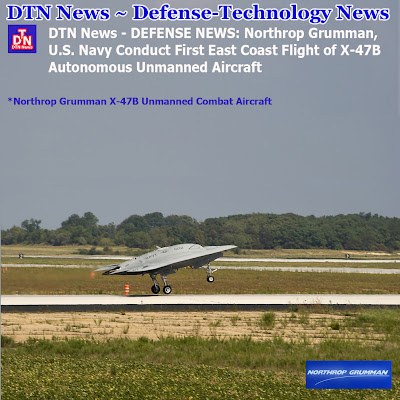 Martis reported that the flight reconfirmed the aircraft's aerodynamic performance, and the performance of its propulsion and flush air data systems. Mission operators also confirmed that the aircraft responded correctly to commands from its onboard guidance, navigation and control system.

"It's very significant to have a Navy mission operator fully integrated into test operations during the X-47B's first flight at Pax River," said Loustaunau. "The team is performing well and looking forward to our next phase of testing."

During the flight, the aircraft communicated with a shore-based version of the aircraft carrier systems that will help guide the X-47B to precision landings on the carrier deck, which are located in the Navy UCAS Aviation/Ship Integration Facility at Pax River.

In 2013, the UCAS-D program plans to demonstrate the ability of the X-47B to safely operate from a Navy aircraft carrier, including launch, recovery, and air traffic control operations. Those trials will be followed by a demonstration of autonomous aerial refueling in 2014. The program also plans to mature technologies required for potential future Navy unmanned air system programs. For the latest X-47B news and information, please visitwww.as.northropgrumman.com/products/nucasx47b/.