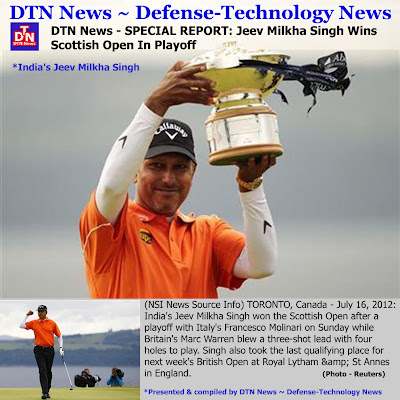 Singh also took the last qualifying place for next week's British Open at Royal Lytham & St Annes in England.
The 40-year-old began the day five shots off the lead but hit a final round 67 to force a playoff with overnight pace-setter Molinari.
He then hit a 12-foot birdie putt at the first extra hole to win his fourth European Tour title and a cheque for 518,046 euros ($634,300).
"The last three, four years have been a struggle for me with the injuries," Singh said.
"It has been really tough - frustrating more than anything else. You feel like your game is coming back and another injury creeps up, but I just stuck myself in there and said that you need to work on the physical side, and I worked hard on that.
"Everything has paid off, and I just want to think about the good things and not what's past and I want to look towards the future now."
Warren's chances of success ended in a meltdown as he hit a double bogey at the 15th and a bogey at the 16th and then dropped another shot at the 17th to finish in a tie for third.
World number one Luke Donald began the day four shots off the lead, but hit a final round 73 to finish in a tie for 16th.
(Reporting by Toby Davis; editing by Pritha Sarkar)
*Link for This article compiled by Roger Smith from reliable sources Reuters*Speaking Image - Creation of DTN News ~ Defense Technology News *This article is being posted from Toronto, Canada By DTN News ~ Defense-Technology News Contact:dtnnews@ymail.com ©COPYRIGHT (C) DTN NEWS DEFENSE-TECHNOLOGY NEWS