Around 2,000 soldiers in buses and armored personnel carriers, along with at least 50 tanks and armored vehicles, moved at dawn into the Ghouta area on the eastern edge of Damascus to reinforce an offensive in the suburbs of Saqba, Hammouriya and Kfar Batna, activists said.
The army pushed into the heart of Kfar Batna and four tanks were in its central square, they said, in a move to flush out rebels who had taken over districts just a few kilometers from President Bashar al-Assad's centre of power.
"It's urban war. There are bodies in the street," said one activist, speaking from Kfar Batna. Activists said 14 civilians and five insurgents from the rebel Free Syrian Army were killed there and in other suburbs.
The Arab League suspended the work of its monitors on Saturday after calling on Assad to step down and make way for a government of national unity. It said Arab foreign ministers would discuss the Syrian crisis on February 5.
Arab League chief Nabil Elaraby left for New York on Sunday where he will brief representatives of the U.N. Security Council on Tuesday to seek support for an Arab peace plan that calls on Assad to step aside after 10 months of protests.
He will be joined by Qatari Prime Minister Sheikh Hamad bin Jassim al-Thani, whose country heads the league's committee charged with overseeing Syria.
Speaking shortly before he left Cairo for New York, Elaraby said he hoped to overcome resistance from China and Russia over endorsing the Arab proposals. "There are contacts with China and Russia on this issue," he said.
A Syrian government official was quoted by state media as saying Syria was surprised by the decision to suspend operations, which would "put pressure on (Security Council) deliberations with the aim of calling for foreign intervention and encouraging armed groups to increase violence."
Assad blames the violence on foreign-backed militants.
ARMY DEATHS
State news agency SANA reported funerals on Saturday for 28 soldiers and security force members killed by "armed terrorist groups" in Homs, Hama, Deraa, Deir al-Zor and Damascus province. 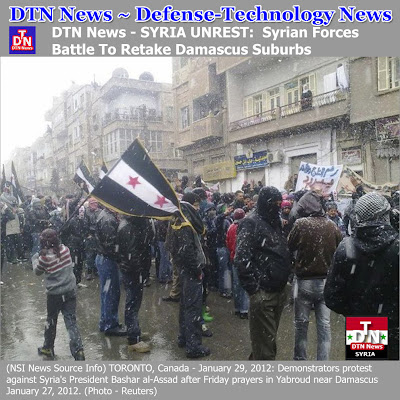 Another 16 soldiers were reported killed on Sunday. SANA said six soldiers were killed in a bombing southwest of Damascus, while the opposition Syrian Observatory for Human Rights said 10 soldiers were killed when their convoy was attacked in Jabal al-Zawiya in northern Syria.
Faced with mass demonstrations against his rule, Assad launched a military crackdown to try to subdue the protests. Growing numbers of army deserters and gunmen have joined the demonstrators, increasing instability in the country of 23 million people at the heart of the Middle East.
The insurgency has been gradually approaching the capital, whose suburbs, a series of mainly conservative Sunni Muslim towns bordering old gardens and farmland, known as the al-Ghouta, are home to the bulk of Damascus's population.
One activist in Saqba suburb said mosques there had been turned into field hospitals and were appealing for blood supplies. "They cut off the electricity. Petrol stations are empty and the army is preventing people from leaving to get fuel for generators or heating," he said.
The Damascus suburbs have seen large demonstrations demanding the removal of Assad, a member of the minority Alawite sect, an offshoot of Shi'ite Islam that has dominated the mostly Sunni Muslim country for the last five decades.
TOWN BESIEGED
In Rankous, 30 km (20 miles) north of Damascus by the Lebanese border, Assad's forces have killed at least 33 people in recent days in an attack to dislodge army defectors and insurgents, activists and residents said on Sunday.
Rankous, a mountain town of 25,000 people, has been under tank fire since Wednesday, when several thousand troops laid siege to it, they said.
France, which has been leading calls for stronger international action on Syria, said the Arab League decision highlighted the need to act.
"France vigorously condemns the dramatic escalation of violence in Syria, which has led the Arab League to suspend its observers' mission in Syria," the Foreign Ministry said.
"Dozens of Syrian civilians have been killed in the past days by the savage repression taken by the Syrian regime ... Those responsible for these barbarous acts must answer to their crimes," it said.
The Arab League mission was sent in at the end of last year to observe Syria's implementation of a peace plan, which failed to end the fighting. Gulf states withdrew monitors last week, saying the team could not stop the violence.
The United Nations said in December more than 5,000 people had been killed in the protests and crackdown. Syria says more than 2,000 security force members have been killed by militants.
On Friday, the U.N. Security Council discussed a European-Arab draft resolution aimed at halting the bloodshed. Britain and France said they hoped to put it to a vote next week.
Russia joined China in vetoing a previous Western draft resolution in October, and has said it wants a Syrian-led political process, not "an Arab League-imposed outcome" or Libyan-style "regime change.
(Additional reporting by Erika Solomon, Dominic Evans and Mariam Karouny in Beirut; Editing byJanet Lawrence)
*Link for This article compiled by Roger Smith from reliable sources Reuters
*Speaking Image - Creation of DTN News ~ Defense Technology News *This article is being posted from Toronto, Canada By DTN News ~ Defense-Technology News Contact:dtnnews@ymail.com ©COPYRIGHT (C) DTN NEWS DEFENSE-TECHNOLOGY NEWS