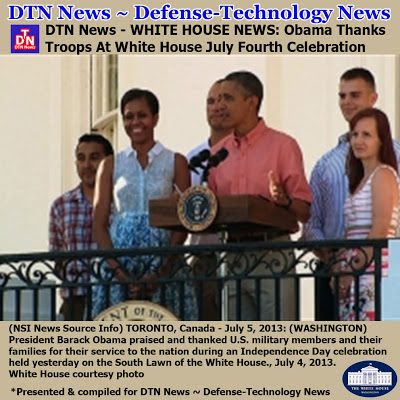 The event was attended by military members representing all branches of the armed forces.

“We are incredibly grateful for your service, and we're thankful that you get a chance to spend the Fourth here with us,” Obama told the service members.

This year’s Fourth of July celebration marked 237 years after the signing of the Declaration of Independence, the president said. Today, the United States “stands as the greatest nation on Earth,” he said.

“And what makes us great is not our size or our wealth, but our values and our ideals and the fact that we're willing to fight for them,” the president added.

America continues to be “a land of liberty and opportunity; a global defender of peace and freedom; a beacon of hope for people everywhere who cherish those ideals,” Obama said.

And the nation’s service members -- past and present -- “have defended our nation at home and abroad,” Obama said.

“You fought for our nation's beliefs, to make the world a better and safer place,” he told service members at the White House. “People in scattered corners of the world live in peace today are free to write their own futures, because of you.”

Obama praised the “incredibly capable and brave men and women” serving in the nation’s armed forces, and he highlighted some of the military members in attendance, including Army Spc. Heidi Olson, who, after being wounded by an improvised explosive device in Afghanistan, gave lifesaving treatment to other injured soldiers.

Olson “had to be ordered to stop and get treatment for herself when the MEDEVAC aircraft arrived,” the president said. “And for her courage, she was awarded a Bronze Star. ”

The president also saluted Navy Petty Officer Joe Marcinkowski who, he said, “serves wounded warriors at Walter Reed, coordinating their care and supporting their families throughout their recoveries. ”

The president also praised Marine Corps Cpl. Amber Fifer. Fifer “was shot five times in an attack in Helmand province [in Afghanistan], and has stayed on to serve as a Marine Corps drill instructor,” the president said.

Obama also saluted Coast Guard Petty Officer Randy Haba. The Coast Guard member, the president said, “was one of the first responders to rescue the crew of a ship off the coast of North Carolina when Hurricane Sandy struck and saved the lives of five mariners.”

Each day, U.S. service members are “carrying forward the ideals that inspired that American Dream [that began] 237 years ago,” Obama said.

“Defending our nation and our freedoms with strength and with sacrifice is your daily charge,” the president told the service members. “And it's the charge of all of us -- the charge of all who serve worldwide, including our troops that are still in harm's way, and their families back home. They serve, too. And so we think of them, we pray for them.

“And on behalf of all Americans, I want to say thank you and wish you all a very, very happy Fourth of July,” Obama continued. “You've earned it. So, God bless you. God bless your families. God bless the United States of America.”

BAE Systems San Francisco Ship Repair, San Francisco, Calif., is being awarded a $10,772,461 firm-fixed-price contract for a 56-calendar day regular overhaul and dry docking availability of Military Sealift Command dry cargo/ammunition ship USNS Carl Brashear (T-AKE 7).  Work will include inspection of the propeller shaft and stern tube, cleaning and painting of the hull, inspection and polish of the bow thruster propeller, installation of the cloropac unit and overhaul of the seal valves.  Brashear’s primary mission is to operate as part of a carrier strike group, providing fuel, ammunition, and dry and refrigerated stores to support the U.S. Navy ships at sea.  The contract includes options which, if exercised, would bring the total contract value to $12,334,532.  Work will be performed in San Francisco, Calif., and is expected to be completed by Sept. 25, 2013.  Fiscal 2013 Navy Working Capital contract funds in the amount of $10,772,461 will be obligated at the time of award, and will expire at the end of the current fiscal year.  This contract was competitively procured with proposals solicited via the Federal Business Opportunities website, with one offer received.  Military Sealift Command Norfolk, Norfolk, Va., a field activity of Military Sealift Command, is the contracting activity (N32205-13-C-3015).

Air Force
TRI-COR Industries Inc., Lanham, Md., has been awarded a $73,903,803 firm-fixed-price indefinite-delivery/indefinite-quantity contract for applications, infrastructure and systems support, Increment 2 (AISS II) services in support of the Mobility Air Force Command and control and in-transit visibility/business systems.  Work will be performed at Scott Air Force Base, Ill., and is expected to be completed by July 31, 2017.  This award is the result of a competitive small business set-aside acquisition with no limit to the number of offers solicited and six offerors were received.  A combination of Transportation Working Capital Fund Operating funds and Operations and Maintenance funds will be used for this contract.  The maximum dollar value of the life of the contract (Aug. 1, 2013 through July 31, 2017) is $99,000,000.  Fiscal 2013 funds will be used for two months of phase-in for which $71,178 will be obligated at time of award.  This is not a multiyear contract.  Headquarters Air Mobility Command/ A7KQ, Scott Air Force Base, Ill., is the contracting activity (FA4452-13-D-0002). 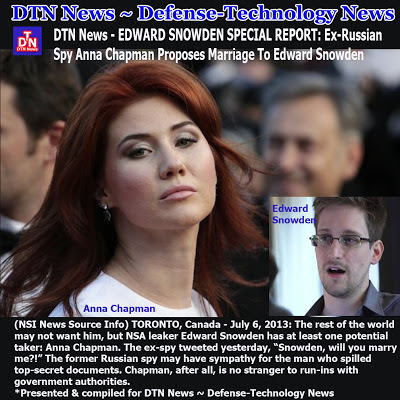 (NSI News Source Info) TORONTO, Canada - July 5, 2013: The rest of the world may not want him, but NSA leaker Edward Snowden has at least one potential taker: Anna Chapman. The ex-spy tweeted yesterday, “Snowden, will you marry me?!”

The former Russian spy may have sympathy for the man who spilled top-secret documents. Chapman, after all, is no stranger to run-ins with government authorities.
The 31-year-old had been posing as a real-estate agent in the United States in 2010 when she was accused of gathering intel for Russia. She and nine others were deported back to Russia in a prisoner swap.
Now the ex-secret agent has become a celebrity in her homeland, most recently as host of the TV show, “Secrets of the World.”
Snowden may have caught Chapman’s attention since he landed at Moscow's Sheremetyevo airport to seek refuge. “@nsa will you look after our children?” She posted later.
But Snowden seems to be unavailable at the moment -- and may be rejected by Russia as well. After 11 days, the AP reports that “Deputy Foreign Minister Sergei Ryabkov said Russia had received no request for political asylum from Snowden and he had to solve his problems himself.”
The NSA contractor has been on the run since he spilled secrets on the classified NSA surveillance programs to the press. He has been in diplomatic limbo since having his passport revoked, and has had countless requests for asylum refused.
*Edward Snowden Related News:
Blowback from the White House's vindictive war on whistleblowers
Shamai Leibowitz - guardian.co.uk, Friday 5 July 2013 13.30 BST
Edward Snowden is explicit: seeing whistleblowers like me punitively treated only motivates citizens of conscience more

In 2009, I was working as a contract linguist for the FBI when I discovered that the FBI was committing what I believed to be illegal acts. After I revealed these to a blogger, the Department of Justice came after me with a vengeance.

When the FBI confronted me, I admitted what I had done. I tried to negotiate for a reasonable resolution of my case. The documents I disclosed were never explicitly published anywhere, but that didn't matter: the DOJ was adamant that I be charged under the Espionage Act and spend time in jail. Even though I leaked the material because I thought the FBI was doing something illegal, and the American people had a right to know, I faced the threat of dozens of years in prison. I did what was best for my family, and signed a plea agreeing to a 20-month sentence.

Considering Edward Snowden's revelations, what I witnessed pales in comparison. But reading about the secretive NSA programs collecting the private data of millions of Americans did not surprise me. As Snowden explained, he watched for years as the military-industrial-intelligence complex turned our country into a massive surveillance state, and observed a "continuing litany of lies" from senior officials to Congress. Eventually, he decided to speak out, because he could not in good conscience remain silent.

Although he chose a very different path than I did – he fled first to Honk Kong and then to Moscow while apparently seeking asylum in another country – the US authorities are faced with a similar dilemma in how to react to his revelations. Can the DOJ and national security establishment act in a reasonable manner? Or will they allow their fuming anger to consume them into making further irrational decisions?

This ongoing manhunt, accompanied by a smear campaign and threats to throw the book at Snowden, is a grave mistake. If the government really wanted to keep more secrets from coming out, they would do well to let this man of conscience go live his life in some other country. Meanwhile, it would only help them if they were to apologize to the American public for lying to us, and turning the country into what Pentagon Papers leaker Daniel Ellsberg calls the United Stasi of America.

In my case, my family and I pleaded with the DOJ lawyers to avoid a prison term, agree to a lesser punishment and put this case to rest without any media attention. But the FBI and DOJ were insistent on imprisoning me and splashing it all over the media. The ink was not even dry on my plea bargain before they ran to the media with a press release, announcing to the whole world how the 20-month prison sentence will teach me – and any future whistleblowers – a great lesson.

But this punitive strategy, this desire to demonize and imprison people at all costs, is wrong and misguided.

When Edward Snowden, hiding in Honk Kong, participated in an online chat to explain his motives, he was asked whether the treatment of other whistleblowers influenced him. He responded:

"[Previous whistleblowers] are all examples of how overly-harsh responses to public-interest whistleblowing only escalate the scale, scope, and skill involved in future disclosures. Citizens with a conscience are not going to ignore wrongdoing simply because they'll be destroyed for it: the conscience forbids it. Instead, these draconian responses simply build better whistleblowers."

So it seems that in their goal to imprison me, to imprison John Kiriakou, to detain Bradley Manning in what have been called cruel and inhumane conditions and seek monstrous punishment, to aggressively prosecute NSA whistleblower Thomas Drake and others – they actually encouraged Snowden to reveal this important information.

The Snowden saga is a great teaching moment for the Obama administration. It is now reaping the fruit of its vindictive behavior.

Even in a democracy certain information needs to remain secret, and those with access to that information must honor their obligation to safeguard it. But Snowden and other whistleblowers have not leaked secrets for their own benefit or enrichment; rather, they sacrificed the comfort of their lives to expose lies, fraud, human rights abuses, and unconstitutionality.

As Martin Luther King pointed out, we should never forget that everything Adolf Hitler did in Germany was "legal" and everything the Hungarian freedom fighters did in Hungary was "illegal". Of course, the abuses revealed by Snowden are a far cry from the atrocities of the Nazis, but the principle, nevertheless, is the same: obedience to the law should not be absolute. Technically, we whistleblowers broke the law, but we felt, as many have felt before, that the obligation to our consciences and basic human rights is stronger than our obligation to obey the law.