CONTRACTS
NAVY
Bechtel Plant Machinery, Inc., Monroeville, Pa., is being awarded a $583,025,557 cost-plus-fixed-fee contract for naval nuclear propulsion components.  Work will be performed in Monroeville, Pa. (65.9 percent), and Schenectady, N.Y. (34.1 percent). Contract funds will not expire at the end of the current fiscal year.  No completion date or additional information is provided on Naval Nuclear Propulsion Program contracts.  The Naval Sea Systems Command is the contracting activity (N00024-12-C-2107).

Sikorsky Support Services, Inc., Pensacola, Fla., was awarded on Jan. 31 a $26,063,162 modification to a previously awarded indefinite-delivery requirements contract (N00019-11-D-0014) to exercise an option for logistics services and materials for organizational, intermediate, and depot-level maintenance to support 161 T-34, 54 T-44, and 172 T-6 aircraft based primarily at Naval Air Station (NAS) Corpus Christi, Texas; NAS Whiting Field, Fla.; and NAS Pensacola, Fla.  Work will be performed in Corpus Christi, Texas (50 percent); Whiting Field, Fla. (39 percent); Pensacola, Fla. (8 percent); and various sites within the continental United States (3 percent).  Work is expected to be completed in April 2012.  Contract funds will not expire at the end of the current fiscal year.  No funds will be obligated at time of award.  The Naval Air Systems Command, Patuxent River, Md., is the contracting activity.

Huntington Ingalls, Inc., Pascagoula, Miss., is being awarded a $9,000,000 modification to previously awarded contract (N00024-10-C-2229) for additional long lead time material in support of the LHA Replacement Flight 0 amphibious assault ship, LHA 7.  Work will be performed in Pascagoula, Miss, and is expected to be completed by May 2013.  Contract funds will not expire at the end of the current fiscal year.  The Naval Sea Systems Command, Washington, D.C., is the contracting activity.

General Dynamics Advanced Information Systems, Inc., Pittsfield, Mass., is being awarded a $7,150,086 cost-plus-incentive-fee contract to provide fiscal 2012 and fiscal 2013 operational and facilities support, design, development, production and installation of United States and United Kingdom SSBN, ballistic missile submarine; SSBN-R, ballistic missile submarine-replacement; and SSGN, guided missile submarine, Fire Control Weapons Training Systems, as well as design and development of United States SSBN Training Afloat.  This contract contains options, which, if exercised, will bring the contract value to $13,340,198.  Work will be performed in Pittsfield, Mass., and is expected to be completed Sept. 30, 2012.  With exercised option, work will continue through to May 30, 2014.  Contract funds in the amount of $3,105,330 will expire at the end of the current fiscal year.  The contract was not competitively procured.  Strategic Systems Program, Washington, D.C., is the contracting activity (N00030-12-C-0014).

DEFENSE ADVANCED RESEARCH PROJECTS AGENCY
Johns Hopkins University, Laurel, Md., is being awarded an up to $85,000,000.00 indefinite-delivery/indefinite-quantity, task order contract.  This university-affiliated research center contract will provide for advanced research, development, and engineering support for Defense Advanced Research Projects Agency technology programs.  Work will be performed in Laurel, Md, and is expected to be completed by Feb. 1, 2017.  The Defense Advanced Research Projects Agency is the contracting activity (HR0011-12-D-0001).

Northrop Grumman Space & Mission Systems, Redondo Beach, Calif., is being awarded a $9,035,520 cost-plus-fixed-fee contract.  The award is for research on the Defense Advanced Research Projects Agency Nitride Electronic Next Generation Technology Program.  The performer will develop device and integration technologies necessary to realize enhancement and depletion mode nitride transistors that simultaneously provide extremely high-speed and high-voltage operation in a process consistent with large-scale integration in circuits of 1,000 or more transistors.  Work will be performed in Redondo Beach, Calif. (86.54 percent); Santa Barbara, Calif. (8.30 percent); Tempe, Ariz. (3.50 percent); and University Park, Pa. (1.66 percent).  Work is expected to be completed by Aug. 2, 2013.  The Defense Advanced Research Projects Agency is the contracting activity (HR0011-09-C-0132).

Source: DTN News - - This article compiled by Roger Smith from reliable sources By Laura MacInnis and Parisa Hafezi - Reuters (NSI News Source Info) TORONTO, Canada - February 6, 2012: In a television interview, Obama also said he did not believe Tehran had the "intentions or capabilities" to attack the United States, playing down the threats from Tehran and saying he wanted a diplomatic end to the nuclear standoff."Any kind of additional military activity inside the Gulf is disruptive and has a big effect on us. It could have a big effect on oil prices. We've still got troops in Afghanistan, which borders Iran. And so our preferred solution here is diplomatic," Obama said. 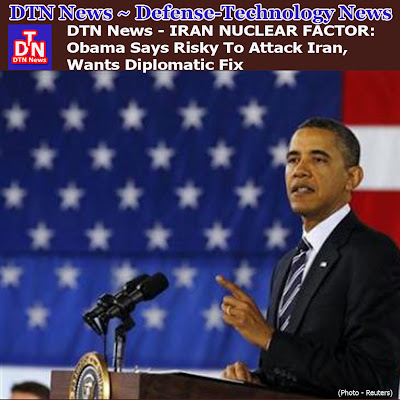 His comments echoed concerns expressed by earlier by Iran's neighbor Turkey that an attack on Iran would be disastrous.Obama, who is up for re-election in November, has ended the U.S. war in Iraq and is winding down combat in Afghanistan amid growing public discontent about American war spending at a time when the economy remains shaky.He said Israel had not yet decided what to do in response to the escalating tension but was "rightly" concerned about Tehran's plans."My number one priority continues to be the security of the United States, but also the security of Israel, and we are going to make sure that we work in lockstep as we proceed to try to solve this, hopefully diplomatically," he told NBC.Iranian leaders have responded sharply to speculation that Israel could bomb Iran within months to stop it from assembling nuclear weapons, threatening to retaliate against any country that launches an attack against the Islamic Republic.Iran says its nuclear program is meant to produce energy, not weapons.But its recent shift of uranium enrichment to a mountain bunker - possibly impervious to conventional bombing - and refusal to negotiate peaceful guarantees for the program or open up to U.N. inspectors have raised fears about Iran's ambitions as well as concerns about Gulf oil supplies.'DISASTER'Although tough sanctions from the United States and Europe have begun to inflict economic pain in Iran, its oil minister asserted on Saturday it would make no nuclear retreat even if its energy exports ground to a halt.Betraying nervousness about the possibility of a military strike on Iran, two of its neighbors - Qatar and Turkey - urged Western powers on Sunday to make greater efforts to negotiate a solution to the nuclear dispute.Speaking at a security conference in Munich, Turkish Foreign Minister Ahmet Davutoglu said an attack would be a disaster and suggested the dispute over Iran's nuclear program could be ended very rapidly."If there is strong political will and mutual confidence being established, this issue could be resolved in a few days," he said. "The technical disputes are not so big. The problem is mutual confidence and strong political will."He added: "A military option will create a disaster in our region. So before that disaster, everybody must be serious in negotiations. We hope soon both sides will meet again but this time there will be a complete result."Qatari Deputy Foreign Minister Khalid Mohamed al-Attiyah said an attack "is not a solution.""I believe that with our allies and friends in the West we should open a serious dialogue with the Iranians to get out of this dilemma. This is what we feel in our region," he said.Turkey hosted talks between Western powers and Iran a year ago that ended in stalemate because the participants could not agree on an agenda.VOLATILE REGIONDespite Obama's stated preference for a diplomatic solution, he said from the White House on Sunday he would not take options off the table to stop Iran from getting nuclear weapons."We're going to do everything we can to prevent Iran from getting a nuclear weapon and creating an arms race - a nuclear arms race - in a volatile region," he said in the interview.Any military strike on Iran, which might include an attack on the oilfields of No. 1 exporter Saudi Arabia, could send oil prices soaring, which could seriously harm the global economy.Tehran has warned its response to any such strike would be "painful," threatening to target Israel and U.S. bases in the Gulf, and warning it may close the Strait of Hormuz used by one third of the world's seaborne oil traffic.The elite Revolutionary Guards began two days of military maneuvers in southern Iran on Saturday in a show of force for Iran's adversaries. On Sunday, the deputy of that unit said Iran was ready to attack any country whose territory is used by "enemies" to launch a military strike against it.
"Any spot used by the enemy for hostile operations against Iran will be subjected to retaliatory aggression by our armed forces," Hossein Salami told the semi-official Fars news agency. The Gulf states that host U.S. military facilities are Qatar, Bahrain and Kuwait.
Experts currently estimate the longest range of an Iranian missile to be 1,500 miles, capable of reaching Israel and Europe. Las week, Israeli Vice Prime Minister Moshe Yaalon said Iran had been working on a missile that could strike the United States, with a range of 6,000 miles.Asked about that risk, Obama said there was little sign of a pending Iranian attack on U.S. soil. "We don't see any evidence they have those intentions or capabilities right now," he said.
(Additional reporting by William Maclean in Munich, Michael Holden in London and Aruna Viswanatha in Washington; Writing by Laura MacInnis; Editing by Doina Chiacu)*Link for This article compiled by Roger Smith from reliable sources By Laura MacInnis and Parisa Hafezi - Reuters*Speaking Image - Creation of DTN News ~ Defense Technology News *This article is being posted from Toronto, Canada By DTN News ~ Defense-Technology News Contact:dtnnews@ymail.com ©COPYRIGHT (C) DTN NEWS DEFENSE-TECHNOLOGY NEWS

(NSI News Source Info) TORONTO, Canada - February 6, 2012: When Pratibha Patil travelled to Europe last October, she and others in her entourage had a pleasant surprise in the sky. At one point along the air space that the President’s flight was using, half a squadron of Eurofighters appeared on both sides of her Air India plane.
In the graceful style of these sleek war machines, they escorted the presidential aircraft to its safe landing at Patil’s next destination. Even so, those manning the Eurofighters could not resist showing off. 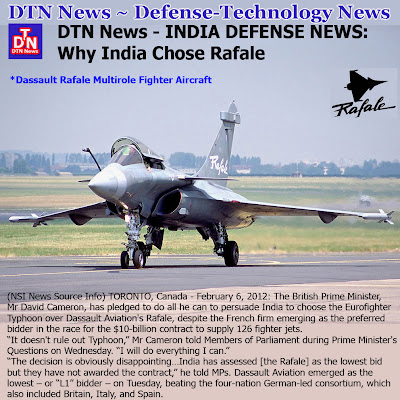