CONTRACTS
ARMY
The Boeing Co., Ridley Park, Penn., was awarded a firm-fixed-price, multi-year contract with a maximum base value of $3,414,000,002 for the production of remanufactured and new-build CH-47F cargo helicopters.  A portion of this contract is in support of foreign military sales for Turkey and United Arab Emirates.  The total of the contract if all options are exercised will be $4,983,900,022.  The estimated completion date is Dec. 31, 2020.  A combination of fiscal 2011, fiscal 2012 and fiscal 2013 Procurement funds in the amount of $1,316,639,035 are being obligated on this award.  One bid was solicited, with one bid received.  The Army Contracting Command, Redstone Arsenal, Ala., is the contracting activity (W58RGZ-13-C-0002).

Rosoboronexport, Russia was awarded a $572,180,894 firm-fixed-price contract modification for 30 Mi-17 helicopters, spare parts, test equipment and engineering support services. The Mi-17 military helicopters will be used by the Afghan National Security Forces Special Mission Wing, an aviation unit that supports counter-terrorism, counter-narcotics and special operations missions. Work will be performed in Russia and is expected to be complete by Dec. 31, 2014.  This contract involves foreign military sales.  FY12 funds in the amount of $572,180,894 are being obligated at time of award.  Army contracting command Redstone Arsenal, Huntsville, Ala. is the contracting activity (W58RGZ11-C-0072/P0006).

Cubic Applications, Inc., San Diego, Calif., has been awarded a $6,619,241 cost-plus-fixed-fee contract to conduct research for technology integration under U.S. Pacific Command’s (PACOM)'s Joint innovation and experimentation initiatives, develop and evaluate various operational aspects including tactics, techniques, and procedures; participation in joint tests and evaluations; and concept evelopment..  Work will be performed at San Diego, Calif., and USPACOM headquarters, Hickam Air Force Base, Hawaii, and is expected to be completed by June 16, 2015.  Fiscal 2012 Research and Development in the amount of $522,985 are being obligated at the time of award.  The Air Force Research Laboratory/RQKHA, Wright-Patterson, Air Force Base, Ohio, is the contracting activity (FA8650-13-C-6398).

NAVY
BAE Systems Norfolk Ship Repair, Norfolk, Va., is being awarded a $22,527,198 modification to previously awarded contract (N00024-10-C-2204) to exercise an option for services and material for USS Arlington (LPD 24) post-shakedown availability.  Specific efforts include: program management, planning, engineering, design, liaison, scheduling, labor and procurement of incidental material in support of fitting out availability and post-shakedown availability.  Work will be performed in Norfolk, Va., (90.53 percent), and Chesapeake, Va., (9.47 percent), and is expected to be completed by April 2014.  Fiscal 2012 Shipbuilding and Conversion, Navy funding in the amount of $1,405,133 will be obligated at time of award.  Contract funds will not expire at the end of the current fiscal year.  The Naval Sea Systems Command, Washington, D.C., is the contracting activity.

Lockheed Martin Mission Systems and Training, Moorestown, N.J., is being awarded a $9,931,106 modification to previously awarded contract (N00024-03-C-5115) for DDG Modernization testing efforts associated with the Aegis Combat System and MK 59 Decoy Launcher System shipcheck studies onboard DDG 62.  Work will be performed in San Diego, Calif. (40 percent), Norfolk, Va. (38 percent), Moorestown, N.J. (8 percent), Washington, D.C. (7 percent), Port Hueneme, Calif. (3 percent), Bath, Maine (2 percent), Pascagoula, Miss. (2 percent), and is expected to be completed by September 2013.  Funding in the amount of $9,931,106 will be obligated at time of award.  Fiscal 2013 Operations and Maintenance, Navyand fiscal 2013 Research, Development, Test and Evaluation funds in the amount of $9,917,702 will expire at the end of the current fiscal year.  The Naval Sea Systems Command, Washington, D.C., is the contracting activity.

DEFENSE INFORMATION SYSTEMS AGENCY
Microsoft Corporation Sitz, Redmond, Wash., is being awarded an indefinite delivery/indefinite quantity contract with a total cumulative face value of $412,240,000. The minimum guarantee is $5,000, for Microsoft Enterprise Technical Support Services (METSS) necessary to obtain highly trained "Microsoft Blue Badge Cardholder-support".  These services require access rights to Microsoft's proprietary (closed-source) code, which is licensed under exclusive legal right of Microsoft.  The core requirements are for the contractor to provide Microsoft Consulting Services that include software developers and product teams to leverage a variety of proprietary resources and source code, and Microsoft Premier Support services such as tools and knowledge bases, problem resolution assistance from product developers, and access to Microsoft source code when applicable to support Department of Defense's mission. The period of performance is a one-year base period and four one-year option periods for a total period of five years.  Performance will predominantly be within the continental United States; however, support services may also be required at multiple overseas locations.  The original solicitation was issued as an other than full and open competitive action, one proposal was received.  The Defense Information Technology Contracting organization, Scott AFB, Ill., is the contracting activity (HC1028-13-D-0023). 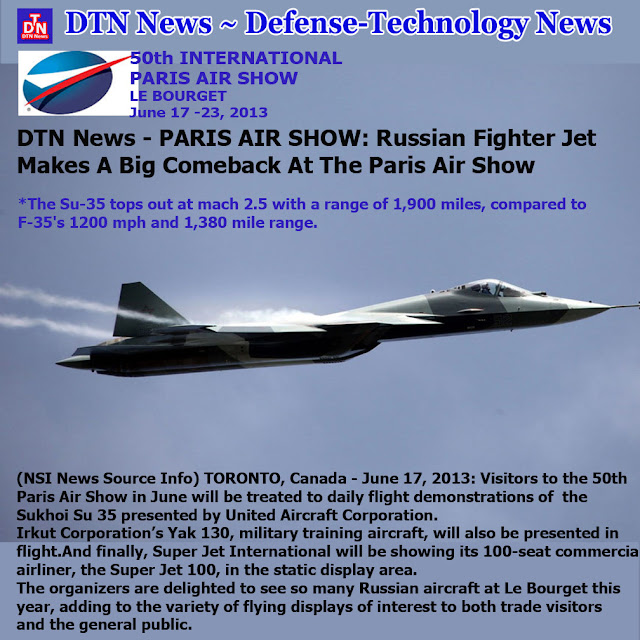 Irkut Corporation’s Yak 130, military training aircraft, will also be presented in flight.
And finally, Super Jet International will be showing its 100-seat commercial airliner, the
Super Jet 100, in the static display area.

The organizers are delighted to see so many Russian aircraft at Le Bourget this year,
adding to the variety of flying displays of interest to both trade visitors and the general
public.

Over 2,000 exhibitors from 44 countries have booked so far. All the chalet units and
exhibition stands are reserved: 350 chalets, 51,000 m2 of stand space in 6 halls and 43,000 m2 of outside exhibition space. Some 120 aircraft are registered and there will be 27 national pavilions occupying an area of almost 30,000 m2
.
“With a full complement of exhibitors, the 50th Paris Air Show promises to be a
resounding success. This is a reflection of the booming aerospace industry and confirms
our position as the world’s leading air show”, says Emeric d’Arcimoles, Commissaire