DTN News - SINGAPORE NEWS: Singapore Goes To The Polls On May 7

DTN News - SINGAPORE NEWS: Singapore Goes To The Polls On May 7
**PAP government will involve young in nation-building says

POLLING day is on May 7, and it will be a public holiday, announced the Returning Officer shortly after President S R Nathan dissolved Parliament on Tuesday afternoon at 3pm and set Nomination Day on April 27. 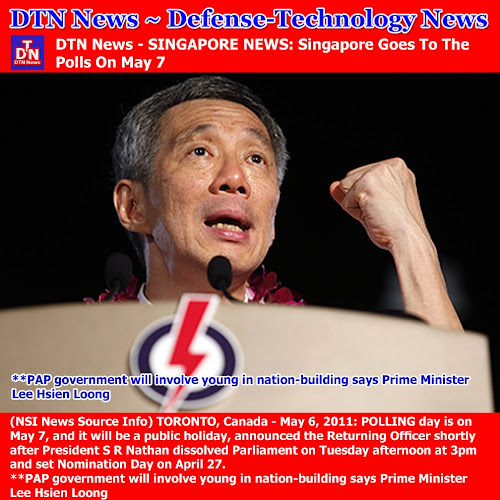 This will be a major task after the polls, he pledged.

PM Lee was speaking at the rally at Ubi to support the People's Action Party team led by Foreign Minister George Yeo, who is facing off the Workers' Party slate anchored by Mr Low Thia Khiang.

Reaching out to the young, Mr Lee said: 'We cherish you. We cheer for you. We want you to succeed, because Singapore belongs to you. You will be Singapore.'

He also exhorted young Singaporeans to build a better nation than what the older generations had achieved for them.

'And so we're making a special effort to engage young people, tapping their ideas and energies, involving them in building Singapore. That will be a major task which will face us after this General Elections,' added PM Lee.

The widely anticipated announcement kicked off a flurry of activities at political party branches, which have been gearing up for weeks.

Mr Yam Ah Mee, chief executive director of the People's Association has been appointed by the Prime Minister as the Returning Officer.

The election deposit for each candidate standing for election will be $16,000.

Candidates can only start their election campaigns after nominations close and right up to two days before polling day. The campaign period will be at least nine days.

DTNSingapore DTN Singapore
DTN Singapore News: NZ Defence Minister thanks S'pore for Christchurch aid: For the assistance rendered by the S...http://bit.ly/mB8QXV
4 minutes ago

DTNSingapore DTN Singapore
DTN Singapore News: Thanking all for making TD campaign a success: Most would have watched the Home music video....http://bit.ly/lUqFAX
4 minutes ago