Police on Saturday arrested several stone-wielding demonstrators who smashed up a Christian school and attempted to attack a church following protests against the alleged desecration of a Koran. 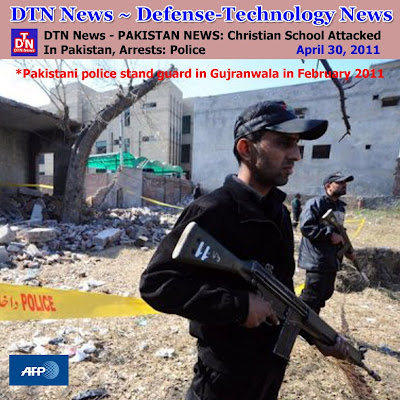 A crowd of around 500 gathered in the suburbs of Gujranwala district near Lahore, the main town of central Punjab province, after two burnt pages of the Islamic holy book were recovered from a Christian graveyard, police said.

Local clerics blamed the Christian community for the incident and used speeches at mosques on Saturday morning to inform others and call a protest against the alleged blasphemy.

In the afternoon, more than 500 rock and stone carrying demonstrators marched towards a church and attempted to attack it after smashing a Christian missionary school, police said.

"They entered the school and broke the furniture there. They tried to march towards a Church but we have dispersed them," Ghulam Mubashir Mekan, senior police officer in Gujranwala told AFP by telephone.

"We have arrested several protesters, the situation is still tense," he said.

Nadeem Anthony, a social activist who visited the area, confirmed the incident. "Several Christian families have left the area," he told AFP.

Residents said around 2,500 Christians are living there.

A Christian woman, Aasia Bibi, was sentenced to hang in Pakistan's central province of Punjab last November after being found guilty of insulting the Prophet Mohammed following a row with Muslim women in her village.

Bhatti had vowed to defy death threats over his opposition to Islamic blasphemy laws.

Another vocal opponent of the blasphemy law, Punjab governor Salman Taseer, was in January shot dead by one of his police bodyguards, who is said to be feted by his jailers and celebrated as a hero on the streets of Islamabad.

The government backtracked on amending the law, which provides for the death penalty, on December 30 after a number of popular protests despite criticism from rights groups who say the law is often abused to settle personal scores.

Daily Times - Zeeshan Javed - ‎2 hours ago‎
LAHORE: Police broke up a mob of people armed with sticks that was threatening to attack a church on Saturday after word spread that two copies of the holy Quran had been burned in eastern Pakistan, officials said. ...

20 injured in clash between Muslims and Christians in Pak

IBNLive.com - ‎4 hours ago‎
PTI | 01:05 AM,May 01,2011 M Zulqernain Lahore, Apr 30 (PTI) More than 20 people, including three policemen, were injured in a clash between Muslims and Christians over the alleged desecration of the Quran at Gujranwala in Pakistan's Punjab province ...

Pakistan Christian TV - ‎3 hours ago‎
The situation in Punjab's city of Gujranwala has been tense since a month after two Christians; a father and a son were accused under Pakistan's controversial Blasphemy law. Christians of Gujranwala praised the Punjab police for controlling mobs and ...

Angry Muslims try to burn a church in Gujranwala

DigitalJournal.com - Ernest Dempsey - ‎5 hours ago‎
Gujranwala - Over 300 Muslim zealots gathered in the form of an angry mob and tried to attack a church in Gujranwala (Punjab province), Pakistan, today (April 30, 2011). However, the police intercepted the mob and foiled its attempt ...

Outlook - ‎8 hours ago‎
PTI | Lahore | Apr 30, 2011 Twenty people were injured in a clash between Muslims and Christians over the alleged desecration of the Quran at Gujranwala in Pakistan's Punjab province today, police said. Forty people were arrested by police following ...

Muslim mob injure dozens of Christian in attack on pretext to blasphemy in ...

Newstrack India - ‎13 hours ago‎
Lahore, April 30(ANI): At least ten people, including police officials, were wounded in attacks on houses of Christian community members in Lahore on Saturday. Demonstrators attacked the residences of members of the Christian religious community in ...

AFP - ‎4 hours ago‎
LAHORE, Pakistan — Police on Saturday arrested several stone-wielding demonstrators who smashed up a Christian school and attempted to attack a church following protests against the alleged desecration of a Koran. A crowd of around 500 gathered in the ...

The Canadian Press - Hussain Afzal - ‎10 hours ago‎
LAHORE, Pakistan — Police broke up a mob of people armed with sticks that was threatening to attack a church Saturday after word spread that two copies of the Qur'an had been burned in eastern Pakistan, officials said. The tiny Christian minority in ...

eTaiwan News - ‎11 hours ago‎
AP Officials say police have broken up an angry mob threatening to burn a church after the alleged burning of a Quran in eastern Pakistan. Saeed Wahla, administrator of Gujranwala city, said the police on Saturday charged 300 protesters that were ...

GulfNews - ‎4 hours ago‎
AP Image Credit: AP People hold bamboo sticks and chant slogans during a rally against the alleged burning of the Quran, in Gujranwala, yesterday. Lahore: Officials say police have broken up an angry mob threatening to burn a church on Saturday after ...

Egypt's ousted president Hosni Mubarak will be sentenced to death if the courts find him responsible for the death of hundreds of pro-democracy protesters, the country's new justice minister said on Saturday.

Mohammed el-Guindi told the Al-Ahram newspaper that Mubarak, his wife and two sons are facing allegations of corruption stemming from 30 years in power.

Mubarak, 82, stepped down from office in February following an 18-day protest centralized on Cairo's Tahrir Square. At least 846 protesters were killed during the uprising.

Mubarak was later placed under arrest, after spending time in a hospital suffering from heart problems, and accused of ordering the use of deadly force.

"Certainly, if convicted for the crime of killing protesters, it could result in the death sentence," said el-Guindi.

"The only one capable of pardoning Mubarak ... would be the new president. If I were the president, I will not pardon him for killing 800 martyrs."

Mubarak has also been blamed for creating a culture of corruption in the government, with much of his wealth reportedly coming through arms deals and gas exports to Israel made through a company owned by a friend.

His wife, Suzanne Mubarak, is also suspected embezzling money through several non-governmental organizations she was involved in.

Since Mubarak's ouster, The Supreme Council of the Armed Forces, which is ruling the country now, has lightened restrictions, reorganized the electoral process and organized the formation of a new government.

They will hold a new presidential election in November.

On Saturday, the BBC reported that the Muslim Brotherhood was preparing to contest for up to half the parliamentary seats.

The religious group, which is well organized but regarded with suspicion by Washington, has said it will not run a presidential candidate or attempt to win a majority in parliament.

The group had previously run candidates under independent banners to circumvent a crackdown by Mubarak on the formation of political parties.

With files from The Associated Press