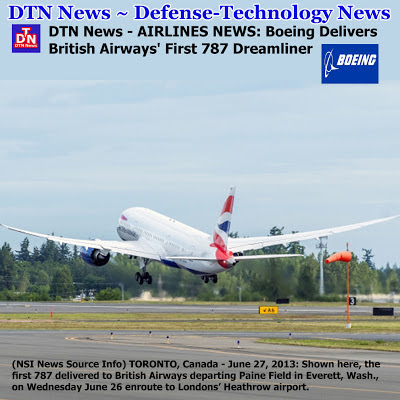 The British Airways 787 departed Paine Field in Everett, Wash., on Wednesday, June 26, arriving at London's Heathrow Airport today at 12:10 pm local time. The airplane was welcomed to its Heathrow home by Willie Walsh, chief executive officer of International Airlines Group (IAG), the company that owns British Airways.
"The 787 is a tremendous, innovative aircraft which sets new standards for environmental performance and operating efficiency and I'm sure British Airways' customers will love it," said Walsh. "The 787 will become a mainstay of the British Airways fleet over the next few years."
British Airways has announced that the airline will operate the 787 from Heathrow to Toronto from Sept. 1 and Heathrow to Newark from Oct. 1.
"The delivery of the first of BA's 787s is an exciting milestone for Boeing and British Airways," said Todd Nelp, vice president of European Sales, Boeing Commercial Airplanes.  "The 787 is the most technologically advanced and fuel-efficient commercial jetliner in its class. Its improved lighting, bigger windows, larger overhead bins, lower cabin altitude and cleaner cabin air will offer BA's passengers an unparalleled flying experience."
The 787 Dreamliner is composed of lightweight composites and features numerous systems, engine and aerodynamic advancements, with unmatched fuel efficiency using 20 percent less fuel than today's similarly sized airplanes.  It is the first mid-sized airplane capable of flying long-range routes, providing airlines with unprecedented fuel economy and low operating costs and enabling airlines to open new, non-stop routes preferred by passengers. On a 787 with Rolls-Royce engines, UK companies make about 25 percent of the 787 by value.
The British Airways 787 Dreamliner carries 214 passengers and is configured with 35 seats in Club World, 25 in World Traveller Plus and 154 seats in the World Traveller cabin.
British Airways operates more than 140 Boeing airplanes within its fleet including 52 777s, as well as the world's largest fleet of 747s with 52.
This is the first of 24 787s British Airways has on order. In addition, IAG recently announced that it will convert 18 787 options to firm orders for British Airways, subject to shareholder agreement. Twelve of these will be 787-10s, meaning British Airways will operate the entire 787 family – the 787-8, 787-9 and 787-10.
British Airways employs approximately 40,000 people, based mainly in the UK, although it has staff based in more 75 countries around the world. The airline has 14,500 cabin crew and 3,500 pilots. The airline's route network currently serves in excess of 177 destinations and it operates in excess of 300,000 flights per year.
Contact:
Fiona O'Farrell
Boeing European Communications
+44 (0) 7557 160 645
fiona.ofarrell@boeing.com
Matthew Knowles
Boeing UK Corporate Communications
+44 (7785) 463 861
matt.knowles@boeing.com
SOURCE Boeing