WASHINGTON, March 6, 2011: U.S. military aircraft flew 640 Egyptians home today and yesterday from the Tunisia-Libya border where the refugees fled to escape the violence that continues between government forces and rebels in Libya.

U.S. Africa Command is overseeing the effort as part of the ongoing U.S. and international response to the evolving humanitarian emergency in that region.

Most of the passengers were men who had been working in Libya before violence flared on Feb. 17 when Libyan leader, Col. Moammar Gadhafi cracked down on protesters demanding government reform.

The last military flight today left Djaerba in the late afternoon carrying 82 Egyptian nationals for a flight to Cairo that was expected to last 3.5 hours.

The C-130J crews have used Naval Support Activity Souda Bay, Greece, on the island of Crete, as a hub and crew-rest location. Crews of the Marine Corps KC-130s have used Naval Station Sigonella, Italy, on the island of Sicily, as a hub for their role in the operations, according to Africom officials. Thousands of Egyptians have returned home from the Tunisia-Libya border on aircraft and ferries belonging to or chartered by governments from around the world.

On March 4, Naval Forces Europe-Africa, which coordinates U.S. Navy support to Africom, established the joint task for Odyssey Dawn to provide tactical command and control for emergency evacuations, humanitarian relief, and future Africom missions in support of the U.S. government response to unrest in Libya.

Africom announced its airlift progress and the establishment of Odyssey Dawn in tweets from the social networking site, Twitter.

The airlift and humanitarian effort is part of a larger U.S. government emergency response that Obama ordered last week.

"The United States, and the entire world, continues to be outraged by the appalling violence against the Libyan people," he said during a March 3 press conference.

"The United States is helping to lead an international effort to deter further violence, put in place unprecedented sanctions to hold the Gadhafi government accountable, and support the aspirations of the Libyan people," the president said. "We are also responding quickly to the urgent humanitarian needs that are developing."

On the same day, Obama approved the use of U.S. military aircraft to help move Egyptians who have fled to the Tunisian border to get back home to Egypt.

The 37th Airlift and Air Mobility Squadrons, working in concert with 17th Air Force (Air Forces Africa) for U.S. Africa Command, are providing this capability. While 37th crews are flying humanitarian relief missions, members of Ramstein's 435th Contingency Response Group are facilitating the missions, providing everything from communications and command and control to force protection.

As the air component for AFRICOM, 17th Air Force is orchestrating the missions through its planning staff and 617th Air and Space Operations Center, collocated with its Ramstein Headquarters.

After more than two years under AFRICOM, 17th is well-versed in cooperative efforts between Departments of Defense and State. So when a humanitarian crisis followed political upheaval in North Africa, 17th Air Force was ready to assist the State Department-led relief effort, according to Air Force Major General Margaret Woodward, 17th AF commander.

"We were able to quickly answer the call and play our part by orchestrating airlift to ease suffering among the Libyan people and third country nationals who have crossed the borders seeking relief from the conflict there," Woodward said. "Operating in Africa has given us many chances to work and become familiar with supporting our partners in the State Department. We're happy to be able to contribute, and we hope, along with the efforts of many other countries, we'll be able to improve the situation for people in need as a result of this conflict."

"The 17th coordinated the effort and made it possible for aid to be quickly delivered to people who are in need, and for us to move evacuees," Schlegel said. "We have been working together to adapt to an evolving situation and provide assistance in support of the overall U.S. government response. So far, it's a great example of Team Ramstein working together."

The team's ability to adapt has been key to their contribution on what Air Force Captain Jason Powell called deemed "an international scale."

"We started March 3, we partnered our capabilities with the 17th to support the State Department and things are going fairly smoothly," said the Captain, the director of operations for the 435th's Contingency Response Element. "Things are always changing, but it's a testament to our flexibility that we continue to make progress on this mission. We are really stoked, to go in and make a difference for people that are suffering." 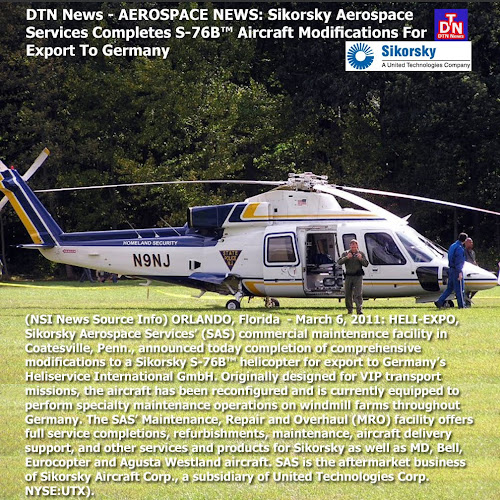 The announcement was made at the Heli-Expo industry trade show this week in Orlando, Fla.

“SAS MRO successfully executed several complex modifications – transforming the VIP configured S-76B helicopter into an aircraft equipped for completely different applications,” said Joe Coleman, Director of SAS Maintenance, Repair and Overhaul. “We are excited about our commercial upgrade capabilities at our Coatesville facility and look forward to continuing to meet customization requirements for our operators worldwide.”

The modifications were completed within four months. The aircraft customization included installation of a side sliding door; a Goodrich hoist; and complete interior overhaul for 12-person utility capacity with all new interior panels, overhead LED lighting, new seating and floor covering. Air-conditioning was adapted to the new interior along with a belt mount for securing the hoist operator.

Other variants of this interior can be installed for a variety of mission profiles including off-shore transportation, search and rescue and emergency medical services aircraft. Each modification is tailored to the customer’s specific mission requirements.

Source: DTN News - - This article compiled by Roger Smith from reliable sources Rheinmetall
(NSI News Source Info) DUSSELDORF, Germany - March 6, 2011: To protect their fleets from missile attacks, the navies of Peru, Finland and Germany have all ordered MASS, Rheinmetall’s "Multi Ammunition Softkill System", a state-of-the-art decoy system for protecting frigates, corvettes, minesweepers and patrol craft. In winning these three orders, MASS has once again outclassed its international rivals as well as gaining a foothold in the South American market. The three orders are worth a total of approximately €15.5 million. 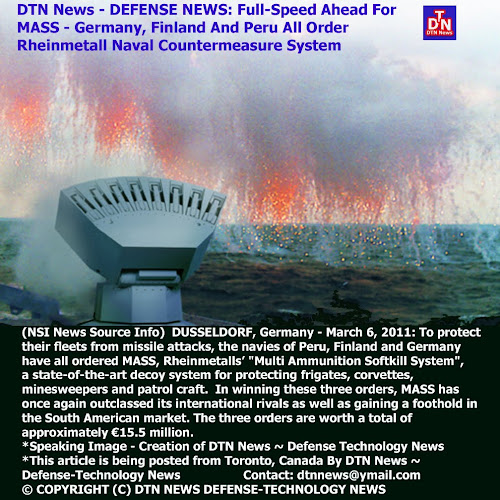 As part of a comprehensive modernization of its LUPO-class frigates, the Peruvian Navy has placed an order with Rheinmetall Defence initially to equip two ships with the MASS naval countermeasure system. The contract also includes an option for equipping two more frigates of this class within the next two years. The German Navy has awarded Rheinmetall with another follow-on order for equipping its minesweepers with MASS, reflecting the great emphasis Germany places on force protection. Following immediate retrofitting in 2008 of two countermine vessels in response to an urgent operational requirement (UNIFIL), two more vessels of the same class were equipped with MASS in 2009. Under the current order, two more countermine vessels will be equipped with a MASS two-launcher configuration with integrated detection unit. The Finnish Navy, opting once again for MASS, has contracted with Rheinmetall Defence to retrofit six RAUMA-class missile boats. In 2002, Finland – the system’s pilot customer – had its Hamina-class fast attack craft outfitted with MASS technology. Since its market launch in 2002, customers around the globe have ordered no fewer than 172 launcher units.
Superior protection with MASS

Guided missiles and other projectiles pose a constant threat to civilian shipping and naval vessels alike. MASS protects ships from attacks using advanced, sensor-guided missiles on the high seas and coastal waters as well as from asymmetric, terrorist-type threats. MASS fires decoy rounds which lure incoming projectiles away from their intended target. Fully automatic, the MASS naval countermeasure system offers significant tactical, operational and logistical advantages and can be installed onboard any vessel. Moreover, it can be integrated into any command and control system or operated in standalone mode. The MASS system’s innovative, programmable omnispectral rounds assure protection in all relevant wavelengths of the electromagnetic spectrum (radar, infrared, laser, EO, UV). Numerous international test campaigns have demonstrated its effectiveness in compelling fashion. 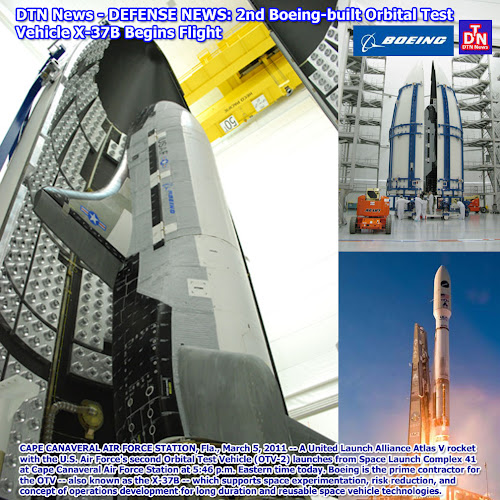 "History was made in December when the X-37B became the United States' first unmanned vehicle to return from space and land on its own," said Craig Cooning, vice president and general manager of Boeing Space & Intelligence Systems. "The success of that mission validated this reusable and effective way to test new technologies in space and return them for examination.

"Today, we took another important step with the successful launch of the second OTV, enabling the RCO to further experiment with the vehicle and its ability to operate in low-Earth orbit," Cooning continued. "Close teamwork between the Air Force Rapid Capabilities Office, the United Launch Alliance Atlas team, and the 45th Space Wing at Cape Canaveral Air Force Station made this launch a success." The first OTV was launched in April 2010 and orbited for approximately eight months. In December, it successfully de-orbited and landed at Vandenberg Air Force Base, Calif., where it continues to undergo post-flight evaluation.