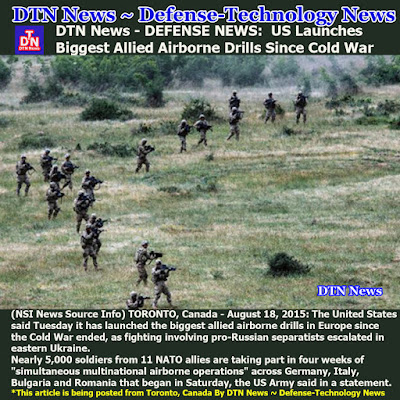 Nearly 5,000 soldiers from 11 NATO allies are taking part in four weeks of "simultaneous multinational airborne operations" across Germany, Italy, Bulgaria and Romania that began in Saturday, the US Army said in a statement.

"Swift Response 15 is the largest Allied airborne training event on the continent since the end of the Cold War," according to the statement from the US Army in Grafenwohr in southern Germany.

It is designed to help allied "high-readiness forces" act as one and "demonstrate the alliance's capacity to rapidly deploy and operate in support of maintaining a strong and secure Europe," it said.

The statement made no reference to the crisis in Ukraine where government troops have been fighting pro-Russian separatists since April last year, which has claimed the lives of nearly 7,000 people.

While the conflict eased after a truce in February, fighting has escalated in recent days.

The fighting has stirred the highest tensions since the Cold War ended more than two decades ago as the West accuses Russia of not only arming the rebels but sending in troops to support them. Moscow denies the charges.

NATO, a 28-country alliance led by the United States, last week defended the number of military exercises it has staged as a response to "growing Russian aggression" and refuted suggestions that they were helping make war in Europe more likely.

The US Army said the highlight of the drills will take place on Aug. 26 when allied warplanes will drop more than 1,000 paratroopers and equipment the to Hohenfels training area in Germany.

A similar drill will also take place the same day at the Novo Selo training area in Bulgaria, a former Soviet ally.

Participating in the exercises until Sept. 13 are more than 4,800 soldiers from Bulgaria, France, Germany, Greece, Italy, the Netherlands, Poland, Portugal, Spain, Britain and the United States.

It said the exercise marks the first time the US 82nd Airborne Division has operated in Europe since supporting NATO operations in Kosovo in 1999. 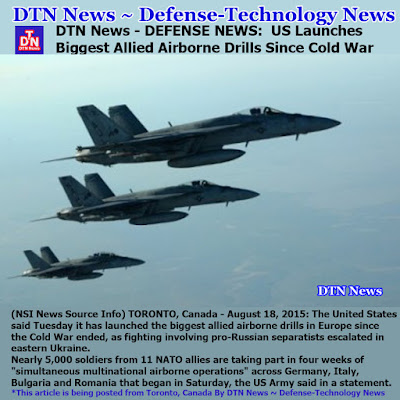 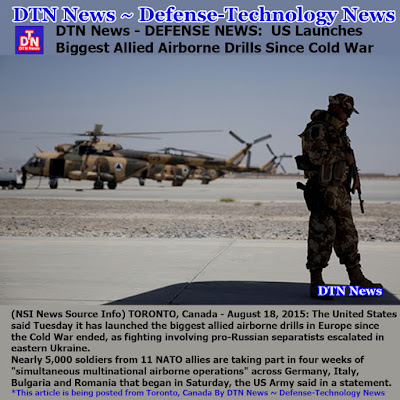 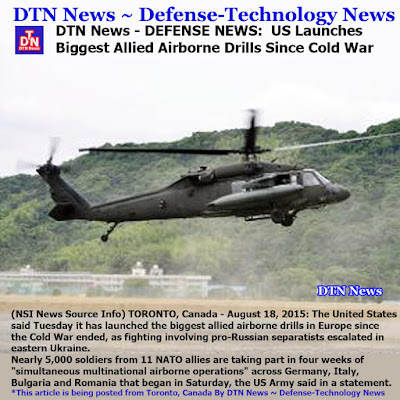 Watts Constructors LLC, McLean, Virginia, was awarded a $63,500,000 firm-fixed-price contract with options for a command and control facility Phase 2, Ft. Shafter, Oahu, with an estimated completion date of Dec. 30, 2017.  Bids were solicited via the Internet with eight received.  Fiscal 2014 military construction funds in the amount of $63,500,000 were obligated at the time of the award. Army Corps of Engineers, Ft. Shafter, Hawaii, is the contracting activity (W9128A-15-C-0003).

Dillon Aero Inc.,* Scottsdale, Arizona, was awarded a $41,500,000 firm-fixed-price foreign military sales contract (Mexico, Chile, Peru, Philippines, Brazil, Japan, Australia, Macedonia, Qatar, Saudi Arabia, Jordan, Afghanistan, Iraq, Pakistan, Tunisia, Kenya) for M134D and M134D-H Minigun spare parts and training. Work will be performed in Scottsdale, Arizona, with a completion date of Aug. 17, 2018.  One bid was solicited with one received.  Fiscal 2015 other procurement funds in the amount of $23,883 were obligated at the time of the award. Army Contracting Command Warren, Michigan, is the contracting activity (W56HZV-15-D-0066).

Tikigaq Construction LLC, Wasilla, Alaska, was awarded a $10,274,274 firm-fixed-price contract for construction at Reservoir, No 1, McRae, Arkansas, with an estimated completion date of March 14, 2017.  Bids were solicited via the Internet with seven received.  Fiscal 2015 other procurement funds in the amount of $10,274,274 were obligated at the time of the award. Army Corps of Engineers, Memphis, Tennessee, is the contracting activity (W912EQ-15-C-0007).

Roy Anderson Corp., Gulfport, Mississippi, is being awarded a $38,343,900 firm-fixed-price contract for construction of the Bolden Elementary-Middle School at Marine Corps Air Station Beaufort.  The work to be performed provides for demolition of the existing Bolden school and construction of a new two-story elementary-middle school for grades three through eight.  The contract also contains one planned modification, which if issued, would increase the cumulative contract value to $40,097,400.  Work will be performed in Beaufort, South Carolina, and is expected to be completed by June 2018.  Fiscal 2014 military construction (Defense-Wide, Department of Defense Education Activity) contract funds in the amount of $38,343,900 are being obligated on this award and will not expire at the end of the current fiscal year.  This contract was competitively procured via the Federal Business Opportunities website, with three proposals received.  The Naval Facilities Engineering Command, Mid-Atlantic, Norfolk, Virginia, is the contracting activity (N40085-15-C-5006).

Harper Construction Company Inc., San Diego, California, is being awarded $18,106,594 for firm-fixed-price task order 0006 under a previously awarded multiple award construction contract (N62473-10-D-5406) for construction of the Special Operations Forces Tactical Ground Mobility Training and Maintenance Facility at Naval Air Station, Fallon.  The project includes infrastructure and facility improvement to support on-going military training.  The project also includes development within the existing naval air station’s uninhabited areas.  Infrastructure improvements would consist of construction activities and utility upgrades.  Functional spaces will include training classrooms, vehicle training bays, vehicle maintenance bays, shops, exam, administration, weapons cleaning, gear lockers, fitness center, break area, and armory.  The task order also contains 10 unexercised options and one planned modification, which if exercised would increase cumulative task order value to $21,724,344.  Work will be performed in Fallon, Nevada, and is expected to be completed by February 2017.  Fiscal 2015 military construction (Defense) contract funds in the amount of $18,106,594 are obligated on this award and will not expire at the end of the current fiscal year.  Six proposals were received for this task order.  The Naval Facilities Engineering Command, Southwest, San Diego, California, is the contracting activity.

The Whiting-Turner Contracting Co., Baltimore, Maryland, is being awarded $16,837,876 for firm-fixed-price task order 0013 under a previously awarded multiple award construction contract (N40085-10-D-5330) for Gate 6 Entry Control Point (ECP) relocation at Naval Station Norfolk.   The work to be performed relocates the Gate 6 ECP facilities and adjacent roadways including utilities and infrastructure.  This is necessary to reconfigure gate access in preparation of the re-routing of Interstate 564.  This will also incorporate tying the existing roadway signals and infrastructure into the new ECP.  The task order also contains two unexercised options, which if exercised would increase cumulative task order value to $19,154,846.  Work will be performed in Norfolk, Virginia, and is expected to be completed by January 2017.  Fiscal 2013 military construction (Navy) contract funds in the amount of $16,837,876 are being obligated on this award and will not expire at the end of the current fiscal year.  Two proposals were received for this task order.  The Naval Facilities Engineering Command, Mid-Atlantic, Norfolk, Virginia, is the contracting activity.

Sikorsky Aircraft Corp., Stratford, Connecticut, has been awarded a $9,787,539 agreement modification (P00002) to exercise the Phase II option of previously awarded other transaction HR0011-15-9-0004 for the Aircrew Labor In-Cockpit Automation System (ALIAS) program. Phase II will involve ALIAS requirements update and concept evolution, ALIAS ACES V2.0 technology development and verification, ALIAS system integration, and Phase II capability demonstrations. During Phase II, Sikorsky will conduct UH-60L based flight demonstration of the Autonomous Crew Enhancement System (ACES) cargo-resupply mission and full demonstration of ACES system on a representative fixed-wing aircraft. The primary objectives of the Phase II option effort are to enhance and mature the Phase I system to support flight tests, enhance the usability and robustness of the human interface, and demonstrate system portability on the ground, including demonstration of the knowledge acquisition approach. The addition of the ALIAS Phase II program brings the total cumulative face value of the agreement from $8,066,058 to $22,746,633. Total Sikorsky cost share is $7,581,453 and the total estimated government funding of the agreement is $15,165,180. Fiscal 2015 research, development, test and evaluation funds in the amount of $9,787,539 are being obligated at time of award. Work will be performed in Stratford, Connecticut (61 percent); Pittsburgh, Pennsylvania (10 percent); East Hartford, Connecticut (18 percent); and Alpharetta, Georgia (11 percent), with an estimated completion date of January 2017. The Defense Advanced Research Projects Agency, Arlington, Virginia, is the contracting activity.