Source: DTN News - - This article compiled by Roger Smith from reliable sources Al Jazeera
(NSI News Source Info) TORONTO, Canada - May 28, 2011: Secret channels are being opened between the Libyan government of Muammar Gaddafi and British citizens with a view to ending the conflict, sources have told Al Jazeera. 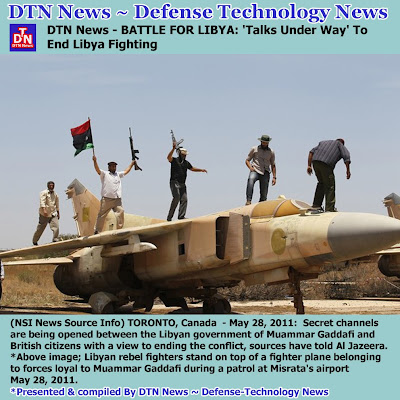 Abdelati al-Obeidi, the Libyan deputy foreign minister, who has been leading the government's diplomacy after Musa Kousa, the foreign minister, defected, gave hints on Saturday to Al Jazeera's James Bays about the secret talks to end the war.
The Al Jazeera correspondent, who spoke to al-Obeidi on a flight to the southern Tunisian town of Djerba, said the Libyan official was quite guarded in his approach and said that "he really was not authorised to tell me what had taken place at this meeting."
"The deputy foreign minister did admit that he had come for talks which have been taking place with British citizens. He could not say what the talks were about but did say it was an exchange of views and a channel of communication being opened by them," he said.
Though he denied that there was any talk of an exit strategy for Gaddafi, he said the government was willing to talk to the opposition in Benghazi, our correspondent said.
He quoted al-Obeidi as saying: "We want to end this war and we want to end soon."
"It is an indication of British agenda playing quite a leading role here, and in this behind-the-scene process, probably British diplomats or members of MI6 may have been involved. Remember they [MI6] were also involved in Kousa's defection about two months ago," our correspondent said.
Britain denies talks
Britain has denied the reports that its officials were involved in any talks with Gaddafi regime.
British Foreign and Commonwealth Office spokesperson said: "No representatives of HMG, or intermediaries, are involved in negotiations with the Libyan regime about a ceasefire. Our position is clear. Qadhafi must go, so that the Libyan people can determine their own future."
The response from Britain has been reasonably low key, Al Jazeera's Bays said.
"I have talked to a representative of the British foreign ministry, a spokeswoman, who said there have been no talks with British diplomats. She said 'they were aware that meetings had taken place with the minister and British citizens but made it clear that they were not civil servants and not diplomats'."
The reports of the ceasefire talks came just hours after NATO carried out a rare day-time air raid on the capital, Tripoli.
A number of explosions were heard throughout the night into Saturday, and at least one of the blasts was said to be near a compound used by Gaddafi.
Columns of smoke were seen rising over the skyline of the city and loud booms could be heard.
State television said earlier that overnight NATO raids caused "human and material" damage near Mizda, to the south.
Discussing the reported secret ceasefire talks, Al Jazeera's Tony Birtley, reporting from Misurata on Saturday, said: "The rebel fighters would not be in favour of any kind of ceasefire. They want Gaddafi to stand trial for crimes against humanity."
Misurata - Libya's third largest city - is now controlled by opposition forces and has been the scene of some of the fiercest battles in the conflict.
"On the ground there's some kind of stalemate here," our correspondent said. "The area, 35km west of Misurata, is free and relatively safe but the situation at the frontline is very fluid. There have been exchanges of fire here and Grad rockets fired from the Gaddafi forces."
Misurata's western outskirts were shaken by heavy fighting on Friday.
Doctors at the local hospital said five opposition fighters were killed and more than a dozen others wounded in the combat.
*Link for This article compiled by Roger Smith from reliable sources Al Jazeera
*Speaking Image - Creation of DTN News ~ Defense Technology News
*This article is being posted from Toronto, Canada By DTN News ~ Defense-Technology News
Contact:
dtnnews@ymail.com 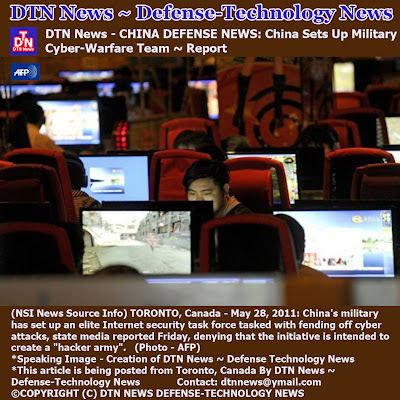 The People's Liberation Army has reportedly invested tens of millions of yuan (millions of dollars) in the project -- which is sure to ring alarm bells around the world among governments and businesses wary of Beijing's intentions.
"Cyber attacks have become an international problem affecting both civilian and military areas," the Global Times quoted China's defence ministry spokesman Geng Yansheng as telling a rare briefing this week.
"China is relatively weak in cyber-security and has often been targeted. This temporary programme is aimed at improving our defences against such attacks."
The 30-member "Cyber Blue Team" -- the core of the PLA's cyber force -- has been organised under the Guangdong military command in the country's south, and will carry out "cyber-warfare drills", the newspaper said.
The United States, Australia, Germany and other Western nations have long alleged that hackers inside China are carrying out a wide-range of cyberattacks on government and corporate computer systems worldwide.
But in a commentary, the Global Times hit out at "some foreign media" for interpreting the programme as a breeding ground for a "hacker army".
"China's capability is often exaggerated. Without substantiated evidence, it is often depicted by overseas media as the culprit for cyberattacks on the US and Europe," the paper said.
"China needs to develop its strong cyber defence strength. Otherwise, it would remain at the mercy of others."
China's military has received annual double-digit increases in its budget over much of the last two decades as it tries to develop a more modern force capable of winning increasingly high-tech wars.
In 2007, the Pentagon raised concerns about a successful Chinese ballistic missile test strike on a satellite, a weapon that could be used to knock out the high-tech communications of its enemies.
US computer firm McAfee said in February that hackers from China have also infiltrated the computer networks of global oil companies, stealing financial documents on bidding plans and other confidential information.
According to US diplomatic cables obtained and published by WikiLeaks, the United States believes that China's leadership has directed hacking campaigns against US Internet giant Google and Western governments.
In one cable, the US embassy in Beijing said it learned from "a Chinese contact" that the Politburo had led years of hacking into computers of the United States, its allies and Tibet's exiled spiritual leader, the Dalai Lama.
*Link for This article compiled by Roger Smith from reliable sources
By Liu Jin | AFP News
*Speaking Image - Creation of DTN News ~ Defense Technology News
*This article is being posted from Toronto, Canada By DTN News ~ Defense-Technology News
Contact:
dtnnews@ymail.com

Source: DTN News - - This article compiled by Roger Smith from reliable sources
Tania Branigan in Beijing guardian.co.uk
(NSI News Source Info) TORONTO, Canada - May 28, 2011:
China's air force is again under close scrutiny as internet users pore over images of its fighter pilots in action. For the second time in a month pictures of military manoeuvres – this time aired by the state broadcaster – have spread rapidly across websites and blogs.
This time the craft is not the country's new stealth fighter; and the reaction is not excitement but amusement. Sharp-eyed viewers have spotted that a key clip came straight from the film Top Gun.

China Central Television News last week broadcast a training exercise by the People's Liberation Army Air Force with one plane firing a missile at another. But an observant viewer spotted that the resulting explosion matches a blast from the final fight scene in the Tom Cruise movie.

The frame-by-frame comparison of the images, by someone posting under the name Liu Yi,demonstrates the likeness, and the Wall Street journal has produced a video comparing the news clip with the movie scene.

The news broadcast was posted on the CCTV website but vanished after news of the gaffe began to spread.

A spokeswoman in the foreign affairs department at CCTV said she was not aware of the claims and would need to look into them. She was not available when the Guardian rang back.

While the clip is no doubt the work of a maverick employee, many internet users have enjoyed the broadcaster's embarrassment. The authorities censor television more strictly than publications and CCTV's news bulletins, in particular, are notorious for their unflinching dullness. 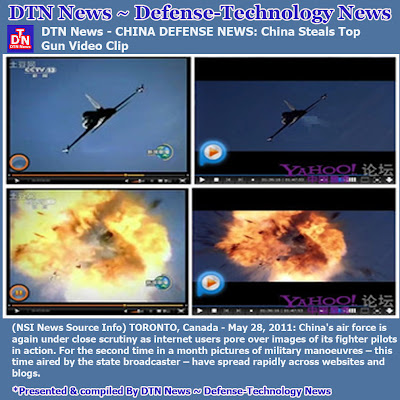 When fire consumed a building in the glossy new CCTV headquarters in 2009, many attacked the broadcaster for censoring the images in its own reports. The celebrity blogger Han Han described the blaze as an act of self-castration by "the world's number one eunuch media"