Source: DTN News - - This article compiled by Roger Smith from reliable sources EADS & Strategy Page
(NSI News Source Info) TORONTO, Canada - May 11, 2013: This milestone followed DGA qualification of the Tiger HAD version on April 10, and marked the delivery startup for Eurocopter’s latest variant of a rotorcraft product line which has already been combat proven during military operations in Afghanistan, Libya and today in Mali. 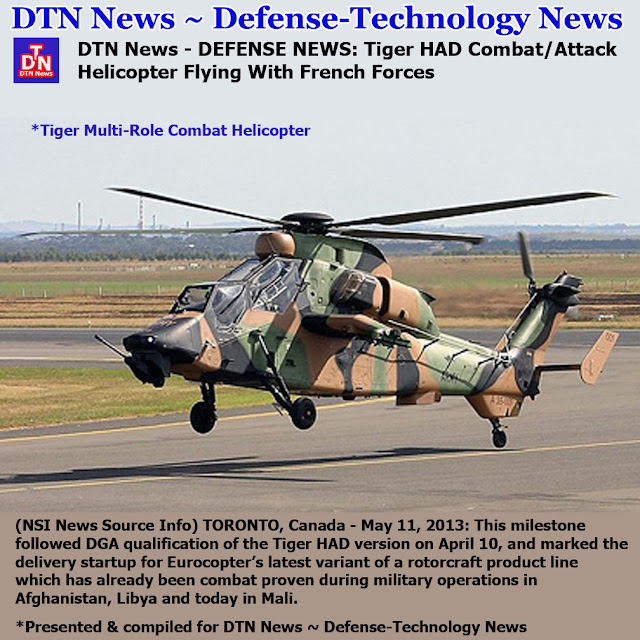 “With the Tiger HAD, Eurocopter further expands the operational capabilities of a combat helicopter family which has demonstrated its mission effectiveness and performance in highly challenging military deployments,” said Dominique Maudet, the Eurocopter group’s Executive Officer for France, and Vice President of Global Business and Services.
To date, France has ordered 40 Tiger combat helicopters in HAD configuration for its French Army Aviation units. Another 24 helicopters has been ordered by the Spanish government to equip the Spanish Army (which includes six Tiger HAP support and escort versions retrofitted for fire support and attack missions).
Feature improvements of the Tiger HAD variant include two enhanced MTR390 turboshaft engines that provide 14 percent more power, improved ballistic protection, a new optronic sighting system, the capability to target and launch Hellfire air-to-surface missiles, an evolved electronic warfare suite, and an IFF (identification, friend or foe) interrogation system.
97 multi-role Tiger family currently are in service in four countries: France, Germany, Spain and Australia; which have ordered a total of 206 helicopters.
Tiger is made by European firm Eurocopter and has shown up just in time. Until the arrival of the French and German Tigers, American AH-64s provided gunship support for all foreign troops in Afghanistan. France also has some Tigers in Somalia, and Mali, where they have performed well. Tiger has spent over 1,500 flight hours in combat zones so far and a hundred have been delivered to Germany, France (which has ordered 80), Spain (24), and Australia (22). A total of 206 Tiger helicopters have been ordered. So far Tigers have spent over 45,000 hours in the air, most of it for training.

The Tiger costs about as much as the AH-64, a ten ton gunship that has been in service since the 1980s. The six ton Tiger has a crew of two and a max speed of 280 kilometers an hour. It cruises at 230 kilometers an hour and usually stays in the air about three hours per sortie. It is armed with a 30mm automatic cannon, 70mm rocket pods (19 rockets per pod), and various types of air-to-ground missiles (eight Hellfire types at once). It can also carry four Mistral anti-aircraft missiles.

Germany appears to have lost its enthusiasm for Tiger and is cutting its order from 80 to 57. Germany has had a lot of problems with Tiger during the last few years. Besides, Germany has better uses for the money, like bailing out the many European nations having financial problems.

It was only last year that Germany got four of its new Tiger helicopter gunships ready for service in Afghanistan. These ASGARD (Afghanistan Stabilization German Army Rapid Deployment) models included sand filters, additional defense systems, a mission data recorder, and communications gear able to deal with systems used by allies. Four more ASGARD Tigers are being prepared. The first four are now in Afghanistan. But all Tigers were grounded on March 4th, after one of them crashed and burned during a training accident in Germany. This is the third Tiger to crash so far, although none of the six crewmen involved were killed.

German troops in Afghanistan wanted this aircraft badly but delivery was delayed several times due to various problems. In addition to the ASGARD upgrades, there were problems with the wiring and a number of less serious shortcomings as well.