Contracts
Navy
Raytheon Co., El Segundo, Calif., is being awarded a $279,400,000 cost-plus-incentive-fee contract for developmental efforts in support of the Technology Development (TD) Phase of the Next Generation Jammer (NGJ) Program, which will replace the aging ALQ-99 tactical jamming system for integration on the EA-18G tactical aircraft.  Developmental efforts will include maturation and demonstration of critical technologies, completion of the system architecture and the requirements derivation and decomposition to subsystems.  The objective of the NGJ TD phase is to develop a cost effective electronic attack system that will provide significantly improved airborne electronic attack capabilities against advanced threats through enhanced agility and precision within jamming assignments, increased interoperability, and expanded broadband capability for greater threat coverage against a wide variety of radio frequency emitters.  Work will be performed in El Segundo, Calif. (55.99 percent); Ft. Wayne, Ind. (13.36 percent); Dallas, Texas (11.12 percent); Torrance, Calif. (9.94 percent); Clearfield, Utah (2.72 percent), McKinney, Texas (2.36 percent); Tucson, Ariz. (1.56 percent); Marion, Va. (2.37 percent); Goleta, Calif. (0.02 percent); Forest, Miss. (0.18 percent); and Andover, Mass. (0.38 percent) and is expected to be completed in May 2015.  Fiscal 2013 Research, Development, Test & Evaluation, Navy contract funds in the amount of $50,030,189 are being obligated at the time of award, none of which will expire at the end of the current fiscal year.  This contract was competitively procured via an electronic request for proposals and three offers were received.  The Naval Air Systems Command, Patuxent River, Md., is the contracting activity (N00019-13-C-0128).

L-3 Communications, Link Simulation & Training Div., Arlington, Texas, is being awarded a $33,174,360 modification to a firm-fixed-price delivery order issued previously against Basic Ordering Agreement N61340-12-G-0001.  This provides for the procurement of 12 tactical operational flight trainer (TOFT) high definition (HD) visual system kits for Naval Air Station (NAS) Oceana, NAS Lemoore and NAS Whidbey Island; purchase and delivery of HD projectors and mirrors for the six TOFTs at the Marine Corps Air Station Miramar; delivery of four TOFT HD visual systems to NAS Whidbey Island; purchase and delivery of uninterrupted power sources for four TOFTs to support the HD visual systems at NAS Oceana; and purchase and delivery of spares kit(s).  In addition, this order provides for the procurement of HD visual systems for two Australian F/A-18E/F Super Hornets TOFTs for the Royal Australian Air Force under the foreign military sales (FMS) program, which includes installation and acceptance testing of four HD9 modification kits, drawing and manual updates, initial spares kits, operator and maintenance training, and overseas crating.  Work will be performed in Arlington, Texas (44 percent); Whidbey, Wash. (16 percent); Oceana, Va. (14 percent); Lemoore, Calif. (13 percent); Royal Australian Air Force Base Amberley, Australia (6 percent); Miramar, Calif. (5 percent); and Atsugi, Japan (2 percent); and is expected to be completed in May 2016.  Fiscal 2012 and 2013 Aircraft Procurement Navy and FMS contract funds in the amount of $33,174,360 will be obligated at the time of award, none of which will expire at the end of the current fiscal year.  This contract combines purchases for the U.S. Navy ($26,357,419; 80 percent) and the Government of Australia ($6,819,941; 20 percent).  The Naval Air Warfare Center Training Systems Division, Orlando, Fla., is the contracting activity.

AQUATE Corp., Huntsville, Ala., is being awarded a $15,313,067 modification to previously awarded contract (N00174-11-C-0037) to exercise option year two to provide engineering and testing; performing modeling and simulation; conducting situational awareness; implementing new equipment and sustainment training; fielding equipment, sustainment, and providing dedicated logistics support to joint program offices and other federal agency customers dependent on critical chemical, biological, radiological, nuclear, and high yield explosives equipment in support of their missions.  Work will be performed in Quantico, Va. (25 percent); Williamsburg, Va. (20 percent); San Diego, Calif. (15 percent); Edgewater, Md. (15 percent); Suffolk, Va. (15 percent); and Aberdeen, Md. (10 percent), and is expected to be completed by July 2014.  Fiscal 2013 Operation and Maintenance, Navy funding in the amount of $606,700 will be obligated at the time of award, and will expire at the end of the current fiscal year.  The Indian Head Explosive Ordnance Disposal Technology Division, Indian Head, Md., is the contracting activity.

CACI Inc.-Federal, Chantilly, Va., is being awarded a $9,366,730 modification under a previously awarded indefinite-delivery/indefinite-quantity contract (N00033-09-D-6503) with firm-fixed-price and/or firm-fixed-price level-of-effort task orders for systems development support services in support of Military Sealift Command’s Command, Control, Communications, and Computer Systems directorate.  Work will be performed in Chantilly, Va. (80 percent); Arlington, Va. (2 percent); Norfolk, Va. (2 percent); Ledyard, Conn. (12 percent), San Diego, Calif. (2 percent) and overseas worldwide (2 percent), and is expected to be completed by July 2014.  Fiscal 2013 Working Capital Funds in the amounts of $9,366,730 will be obligated on individual task orders as they are issued, and will not expire at the end of the current fiscal year.  The Military Sealift Command, Washington, D.C., is the contracting activity (N00033-09-D-6503).

Air Force
Champion Energy Services LLC, Houston, Texas, has been awarded a $729,167 firm-fixed-price modification (D406-08) for a contract (FA3002-08-D-0026) for retail electric service.  The total cumulative face value of the contract is $8,750,000 and it is a multiyear contract.  Work will be performed at Sheppard Air Force Base, Texas, and is expected to be completed by Sept. 30, 2013.  Fiscal 2013 Operations and Maintenance funds in the amount of $8,750,000 are being obligated on this award.  The 82nd Contracting Squadron/LGCB, Sheppard Air Force Base, Texas, is the contracting activity.

Source: DTN News - - This article compiled by Roger Smith from reliable sources Guardian & Alarabiya
(NSI News Source Info) TORONTO, Canada - July 8, 2013:  The death toll from an attack outside the headquarters of the Egypt’s Republican Guard in Cairo early on Monday soared to 51, the head of the emergency services told Reuters. 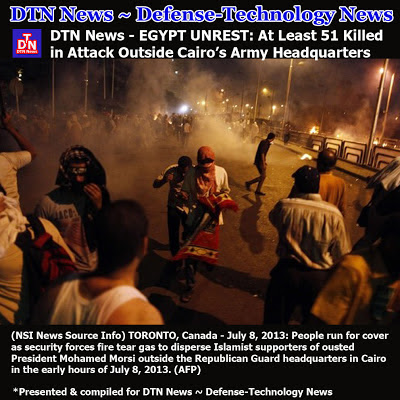 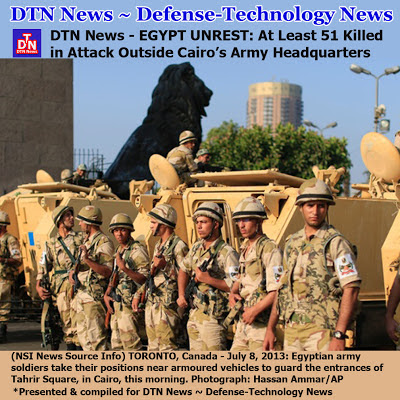 Khaled al-Khatib, a health ministry official, hat put the initial death toll at 34, saying that more than 300 others were wounded.

The Egyptian army and the Muslim Brotherhood traded blames over responsibility for the carnage.

“At dawn, an armed terrorist group tried to storm the Republican Guard [building]... attacking army troops and police,” the Egyptian army said in a statement, adding that one officer was killed.

A security source said that around 200 armed members of the Muslim Brotherhood were arrested in the attack on the Republican Guard's headquarters.

Meanwhile, the Brotherhood said on Monday that 35 supporters of ousted President Mohammad Mursi were shot dead by security forces while they were praying.

"Mursi supporters were praying while the police and army fired live rounds and tear gas at them. This led to around 35 dead and the figure is likely to rise," the Brotherhood said in a statement.

The incident took place outside a key army headquarters, where – according to AFP – reporters were not allowed access.

The army reportedly fired tear gas canister and bullets in the air to disperse the crowd. AFP quoted one protesters as saying that men in civilian clothing attacked the demonstrators.

“The Republican Guard fired tear gas but the thugs came from the side. We were the target,” the protester told AFP.

Supporters of Mursi – who hails from the Muslim Brotherhood – have gathered in large number is different areas in Cairo in the past few days. They are vowing to defend the Islamist president, who was ousted by the Egyptian army after mass demonstration calling for him to be removed from power.

Mursi was the first freely elected president in Egypt.