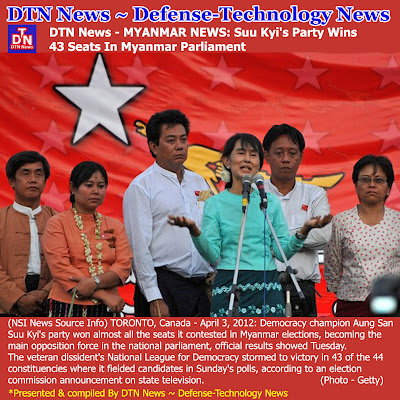 The veteran dissident's National League for Democracy stormed to victory in 43 of the 44 constituencies where it fielded candidates in Sunday's polls, according to an election commission announcement on state television.
The landslide win in the by-elections gave Suu Kyi her first-ever seat in parliament, although it will not threaten the comfortable majority of the military-backed Union Solidarity and Development Party (USDP).
The Nobel laureate said in her victory speech on Monday that she hoped the vote would mark a "new era" for the nation after decades of repressive junta rule, but appealed for political unity and urged her supporters not to gloat.
The NLD won 37 seats in the 440-seat lower house, along with four in the upper house and two in the regional chambers, the results showed.
One quarter of the seats are reserved for unelected military officials.
The NLD lost one seat in eastern Shan state to the Shan Nationalities Democratic Party, which has strong support among ethnic minorities.
The USDP took just one seat, in a constituency in northwest Sagaing where the NLD candidate was disqualified from standing.
Suu Kyi's election to political office marks the latest sweeping change in the country formerly known as Burma after decades of outright military rule ended last year.
Myanmar's quasi-civilian government has surprised even its critics over the past year with a string of reforms such as releasing hundreds of political prisoners and welcoming the opposition back into mainstream politics.
President Thein Sein hailed the polls as a success.
"The election was held successfully," the former general said in brief remarks to reporters on the sidelines of a meeting with fellow leaders of the Association of Southeast Asian Nations in Phnom Penh.
Observers say the regime needs Suu Kyi in parliament to bolster the legitimacy of its political system and spur an easing of Western sanctions.
The European Union opened a debate Tuesday on how fast to lift sanctions, with some EU states pushing for a "gradual, step-by-step" approach to ensure the regime continues pursuing reforms following the landmark vote.
The ASEAN leaders called for all Western sanctions against Myanmar to be lifted in light of the vote.
"The lifting of sanctions would contribute positively to the democratic process and especially economic development of Myanmar," a top Cambodian official told reporters, quoting leaders inside the meeting room.
At the last ASEAN summit in November, Myanmar was rewarded for its reforms by being promised the bloc's chairmanship in 2014. It is also eager to win greater foreign investment with the prospect of sanctions being lifted.
Experts expect the United States and Europe to ease some -- but not all -- sanctions against the regime to bolster the reformers while retaining some leverage to encourage further change.
Unlike in the 2010 general elections, the Myanmar government allowed foreign observers and journalists to witness Sunday's polls, which were to replace lawmakers who gave up their seats to join the government.
The 2010 vote, won by the military's political proxies, was plagued by complaints of cheating and the exclusion of Suu Kyi, who was released from seven straight years of house arrest shortly afterwards.
The NLD swept to a landslide election victory in 1990, when Suu Kyi was in detention, but the junta never recognised the result.

ON THE ROAD TO CHANGE IN BURMA

The Express Tribune - ‎17 minutes ago‎
Suu Kyi's NLD won at least 40 out of the 45 seats which were at stake in the by-polls held on April 2. By Editorial File photograph shows pro-democracy opposition leader Aung being mobbed by supporters at headquarters of NLD in Yangon.

Los Angeles Times - ‎18 minutes ago‎
The people of Myanmar got their first taste of democracy in two decades Sunday, with unofficial results showing they had elected popular opposition leader Aung San Suu Kyi to parliament in the process that ushered in a new era for the long-isolated ...

US PLANNING MORE GESTURES TO MYANMAR

Bangkok Post - ‎1 hour ago‎
The victory of Aung San Suu Kyi and other democrats in Sunday's Myanmar elections must be congratulated. After 22 years, the Myanmar regime has finally given Mrs Suu Kyi and her supporters the election they won in 1990. The euphoria is understandable.

IBNLive.com - ‎4 hours ago‎
Yangon: The many tea shops throughout Yangon were full of people engaged in lively discussions on Monday as they digested the implications of the victory of Aung San Suu Kyi and her party in a historic by-election at the weekend.

Associated Press of Pakistan - ‎4 hours ago‎
ISLAMABAD, Apr 3 (APP) - President Asif Ali Zardari has felicitated Aung San Suu Kyi on landslide win in bye elections in Myanmar and described it as “triumph of democracy as well as victory for the forces of harmony and reconciliation over that of...

Taipei Times - ‎4 hours ago‎
By Shih Hsiu-chuan and Chris Wang / Staff reporters The government yesterday congratulated Myanmar on conducting a peaceful and incident-free election, and expressed its wishes to increase exchanges and cooperation with the country.

swissinfo.ch - ‎5 hours ago‎
Switzerland has eased sanctions on Myanmar's political rulers following elections in which pro-democracy leader Aung San Suu Kyi won a landslide victory. Bern announced on Tuesday that it had lifted a visa ban on President Thein Sein and 86 other ...

The Hindu - ‎6 hours ago‎
On a day when the Myanmar president Thein Sein termed Sunday's by-elections “successful”, his key aide said the results reflected the people's desire for “change”, and welcomed the emergence of a strong opposition as good for democracy.

The Atlantic - ‎6 hours ago‎
By Joshua Kurlantzick Recent elections in the long-time dictatorship went well, but the country has a long way to go. People in Yangon rally to hear election results announced. Reuters This week's by-elections in Myanmar, in which roughly one-tenth of ...

The Age - ‎6 hours ago‎
THE Burmese are a tranquil people, even on an election day clearly going to challenge the army generals who've ruled them for the past 50 years. So it was at the little wooden Buddhist prayer hall of No. 9 Ward in Rangoon's Mayangone district, ...

Brisbane Times - ‎6 hours ago‎
The Burmese are a tranquil people, even on an election day that is clearly going to challenge the army generals who've ruled them for the past 50 years. So it was at the little wooden Buddhist prayer hall of No.9 Ward in Rangoon's Mayangone district,...

The Australian - ‎6 hours ago‎
AT a press conference this week at her National League for Democracy headquarters in Rangoon, Aung San Suu Kyi told supporters that Burma's by-elections were a "triumph of the people" and the "beginning of a new era". These by-elections appear to be ...

The Australian - ‎6 hours ago‎
WHILE many in Burma are euphoric about the spectacular victory of Aung San Suu Kyi's National League for Democracy in Sunday's by-elections, the optimism of veteran activists Ko Ko Gyi and Min Ko Naing is firm but cautious.

WHAT'S NEXT IN MYANMAR?

New York Times (blog) - ‎6 hours ago‎
By DANIEL POLITI It seemed unthinkable only a few months ago. On Sunday, people danced in the streets of Yangon, celebrating that Nobel Peace laureate Daw Aung San Suu Kyi had won a seat in Myanmar's Parliament. Her party, the National League for ... 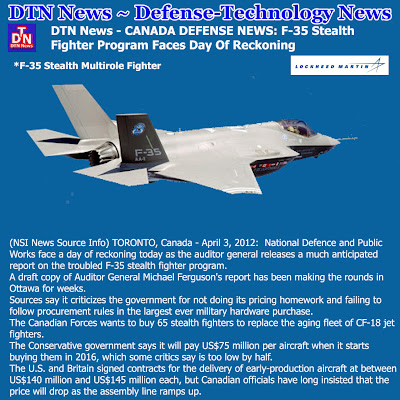 A draft copy of Auditor General Michael Ferguson's report has been making the rounds in Ottawa for weeks.
Sources say it criticizes the government for not doing its pricing homework and failing to follow procurement rules in the largest ever military hardware purchase.
The Canadian Forces wants to buy 65 stealth fighters to replace the aging fleet of CF-18 jet fighters.
The Conservative government says it will pay US$75 million per aircraft when it starts buying them in 2016, which some critics say is too low by half.
The U.S. and Britain signed contracts for the delivery of early-production aircraft at between US$140 million and US$145 million each, but Canadian officials have long insisted that the price will drop as the assembly line ramps up.